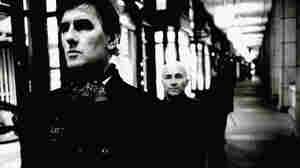 Robert Forster and Grant McLennan of the Go-Betweens on the cover of Oceans Apart. Courtesy of the artist hide caption

June 30, 2005 • After recording throughout the '80s, Grant McLennan and Robert Forster broke up to pursue solo careers. Oceans Apart is their third album since they reunited in 2000.

Lyfe Jennings, from Prison to the Apollo Theater

June 29, 2005 • The music of Chester "Lyfe" Jennings has the familiar feel of old-school classics, and his soulful, gravelly voice is being compared to the likes of R&B greats Al Green and Sam Cook. After a decade behind bars, he's ready to break out with his own brand of "folk soul."

Lyfe Jennings, from Prison to the Apollo Theater

June 27, 2005 • On his latest album, Occasion, singer, pianist and actor Harry Connick Jr. teams up with jazz saxophonist Branford Marsalis. Connick and Marsalis join guest host Frank Stasio to discuss the collaboration and play some songs from the album, which was released on Marsalis' label, Marsalis Music.

June 27, 2005 • The classic rock band Journey is still rocking, and is embarking on its 30th Anniversary tour. NPR's Rob Sachs takes a look at the band and its efforts to regain past stardom, when it could fill stadiums with fans.

June 27, 2005 • He's been awarded the 2005 Pianist of the Year award by the Jazz Journalist's Association, and he also received the first ever 2005 Playboy Magazine Jazz Artist of the Year. His new album is called Same Mother, which reflects the 30-year-old musician's current interest in the blues.

June 25, 2005 • Wesley Stace's first novel, Misfortune, started its life as a song. That's because the author is known first and foremost as singer-songwriter John Wesley Harding. Stace tells Scott Simon about the book and his music.

June 24, 2005 • With her 2003 debut album, Salt, singer Lizz Wright established herself as one of the brightest newcomers in jazz. Wright shifts course on her follow-up CD, Dreaming Wide Awake, adopting a folksy singer-songwriter sound.

June 24, 2005 • News and Notes with Ed Gordon concludes its three-part roundtable series on the art and business of African-American music. This week, we talk with three professionals who've been on the business and creative sides of the music industry — and who know all too well the business of music.

June 22, 2005 • Clarence "Gatemouth" Brown plays on, in the face of a cancer diagnosis. The Louisiana musician and singer wraps the eclectic sounds of his region and jazz influences from elsewhere into his songs: a little bit country, a little bit Cajun, a little bit blues, all mixed with the sound of a big band. Nick Spitzer has followed Gatemouth's career, and has a profile.

June 21, 2005 • Judas Priest has a new album out, Angel of Retribution, and is on tour this summer. Originally from Birmingham, England, Judas Priest pioneered the heavy metal sound in the 1970s and '80s. Lead singer Halford left the band in 1991, citing internal tension, and in 1998, he disclosed that he is gay during an interview on MTV. Nicknamed the "Metal God," Halford returned to Judas Priest in 2003. The band — which takes its name from the Bob Dylan song "The Ballad of Frankie Lee and Judas Priest" — is best known for songs such as "Breaking the Law," "Hell Bent for Leather" and "Livin' After Midnight."

June 21, 2005 • R&B balladeer Eric Benet talks about his latest CD Hurricane, a group of songs six years in the making. The former husband to movie star Halle Berry also talks about how he deals with the constant — and sometimes unfriendly — media attention stirred up by his divorce.

June 20, 2005 • The legendary jazzman turns 87 on July 31, 2005. He and his trio have just released a new CD, For My Father, and he joins John Patitucci and Jack De Johnette for the Great Jazz Trio's upcoming CD, S'Wonderful.

June 20, 2005 • Tired of the trappings of modern concert amplification, Del McCoury pared down his equipment. Now he's attracting much younger audiences, touring with jam bands such as Phish.

June 18, 2005 • Scott Simon talks with jazz guitarist John Scofield about his album That's What I Say, on which he plays the music of Ray Charles.

'Pops' Contributes to Rapper Common's Cause

June 17, 2005 • Lonnie "Pops" Lynn is the father of the rapper Common, and a regular contributor to his son's albums. Lynn's spoken poetry graces the last song on each CD. Lynn says tells Robert Siegel Common's influence set Lynn himself on the right path.

'Pops' Contributes to Rapper Common's Cause