July 31, 2008 • The Lord Dog Bird is the solo project of Colin McCann, the guitarist for Baltimore-based rock outfit Wilderness. The project's self-titled debut album is disarming in its immediacy, due in large part to its creaky four-track production and minimalist sound. The guitars squeal, the drums clank and the vocals crackle, and the effect is an album that evokes the moods of a cranky, disillusioned living-room recluse.

Mates Of State: Pleading The Fifth

July 31, 2008 • In "Now," the pair ditches its familiar electric organ for a softer blend of piano and synthesizer before jumping feet-first into a clash of childhood and maturity. What could be a gleeful, infantile chorus ("Now now now now now now!") is undercut by an all-too-adult existentialist lament. 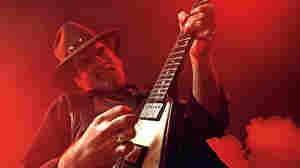 July 30, 2008 • Hayes Carll made a stir in Americana music with his self-released 2004 album, Little Rock. Music critic Robert Christgau says that Carll has matured some since then, and that maturity sounds good on him. Carll is good for a laugh, but Christgau says his sensitive side puts his new album, Trouble In Mind, over the top.

July 30, 2008 • Rock critic Ken Tucker reviews Parallel Play, the new album by Sloan. The Canadian favorites are hoping to attract an American following with this release.

July 30, 2008 • Trappers Cabin, the musical project of Georgia's Joel Nettesheim, makes interestingly odd and unclassifiable music. On Trappers Cabin's latest record, Trappers Mind, Nettesheim blends art-rock, freak-folk, psychedelia and space rock, and throws in plenty of surprises. From song to song, the sound twists and turns, and the result is an eclectic mix of music tied together by its collective goofiness.

Pacifika: The Dawn Of A New Day

July 30, 2008 • A few droning notes cast their wan rays on the opening moments of Pacifika's "Sol," with twinkling guitars further brightening and awakening the melody. Throughout the track, Silvana Kane's voice bends around the notes, calling out to mother, father, sister and brother to join in the dawn of a new day.

'Stronger Than Itself': On The Power Of Jazz

July 29, 2008 • Jazz critic Kevin Whitehead reviews A Power Stronger Than Itself: The AACM and the American Experimental Music by George E. Lewis. The book tracks the history of Association for the Advancement of Creative Musicians, an organization that promoted the development of new jazz styles.

'Stronger Than Itself': On The Power Of Jazz

July 29, 2008 • The Brooklyn-based band Falcon takes its name from an old friend of bandmates Shannon Ferguson and Neil Rosen. Jared Falcon has been in and out of institutions his whole life, but managed to write and record more than 300 songs in the late '80s on a shoddy tape recorder. The band has recovered those old tapes, and plays as a tribute band to an artist whose music never made it past living-room cassettes.

July 29, 2008 • "I Only Want to Be with You" was Dusty Springfield's first solo hit, back in 1964. Now, rebellious alt-country singer Shelby Lynne, who's had an up-and-down career, has remade the song as part of a Springfield tribute album. It's a radically different version.

Nick Cave: Brooding And Devilish As Ever

July 28, 2008 • The theatrical "Lie Down Here (And Be My Girl)" highlights Cave's charm, as he growls his way to the heart of a dark libretto: "One day I'll buy a factory, and assemble you on a production line / I'd buy a million of you, baby, and every single one of them will be mine."

Lie Down Here (And Be My Girl)

July 25, 2008 • The music Wilkes composed for Drop It diverges from the trumpeter's avant-garde roots, with a title track that sounds beautifully in the pocket. Listen for Robert Irving III's unobtrusive electric piano, a woozy frontline melody that peps up to evoke old-school hard-bop, and rhythmically savvy solos that take few harmonic chances, to satisfying effect.

July 25, 2008 • The debut, self-titled album from Oklahoma City-based band The Uglysuit is refreshingly bright and cheery, replete with huge spirit-raising piano and guitar anthems. With a blend of spacey dream pop and a few alt-country flavors (lead singer Israel Hindman's voice mimicks Jeff Tweedy one minute, Conor Oberst the next), the group's sound draws comparisons to the Flaming Lips and the Shins, but the grandiosity of the music is that of space rock proportions.

July 24, 2008 • Singer-songwriter Teitur Lassen originates from the Faroe Islands (which translates to Sheep Islands), a remote spot of land between Iceland and Norway. On his third album, The Singer, Teitur's arrangements are quiet and sparse, but he sings with such confidence and fervor that the effect is, at times, gripping. "Guilt By Association," for example, tells a story about an accidental murder, with thrilling lines like, "Run away, they are coming to get us now." These minor-key dirges are clearly his signature, but some of the more immediately accessible and uplifting moments come when he loosens up.

July 24, 2008 • "Life is a near-death experience," Dr. John sings in "You Might Be Surprised," and he's clearly addressing Hurricane Katrina's devastating effect on his beloved New Orleans. As if to clarify the inspiration, he adds, "Hell is right here on this great big earth."