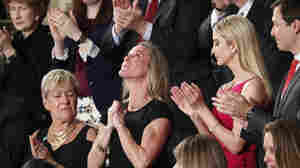 Carryn Owens, the widow of Navy SEAL William "Ryan" Owens, fought back tears as President Trump addressed her during his speech to a joint session of Congress Tuesday. Pablo Martinez Monsivais/AP hide caption

February 28, 2017 • In the president's speech to Congress Tuesday night, he praised Ryan Owens, who was killed in a raid in Yemen. The president addressed Owens' widow, who wept as she sat in the House gallery. 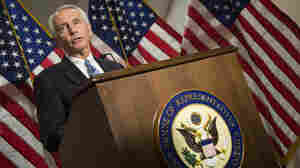 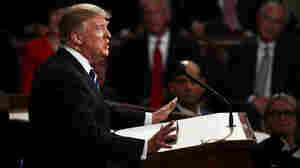 U.S. President Donald Trump arrives to addresses a joint session of the U.S. Congress on Tuesday in the House chamber of the U.S. Capitol in Washington, D.C. Win McNamee/Getty Images hide caption

February 28, 2017 • The president shared his vision for the "renewal of the American spirit" on Tuesday night. Journalists across NPR annotated his remarks. 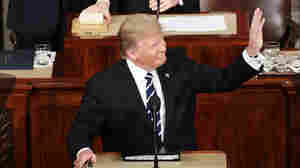 President Trump arrives to address a joint session of the Congress at the Capitol on Tuesday. Chip Somodevilla/Getty Images hide caption

February 28, 2017 • "I am here tonight to deliver a message of unity and strength, and it is a message deeply delivered from my heart," Trump said at the outset. 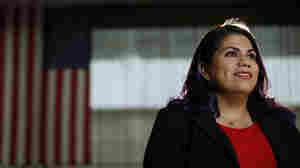 February 28, 2017 • Astrid Silva, who was brought to the U.S. illegally as a child, says she will be talking to people like her parents who have been in the U.S. for years without a path to citizenship, "living in fear." 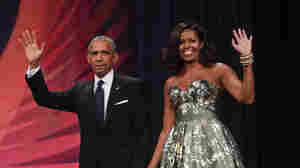 Some of the proceeds from the Obamas' two upcoming books will be donated to charity, both by the publisher and the authors. Pablo Martinez Monsivais/AP hide caption

February 28, 2017 • In a statement Tuesday the publisher said it was "very much looking forward" to working with the former president and former first lady, who will each be writing a book. 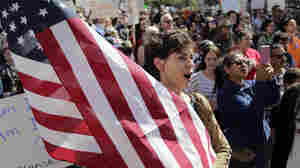 Protesters take part in a No Ban, No Wall rally to support immigrants and oppose a border wall on the steps of the Texas Capitol. Eric Gay/AP hide caption

February 28, 2017 • In a meeting with television anchors on Tuesday, Trump said he would consider immigration reform, though details remain hazy. 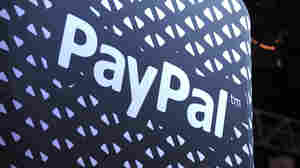 The logo of online payment company PayPal is pictured during an event in Saint-Denis, France, in December 2013. Eric Piermont/AFP/Getty Images hide caption

February 28, 2017 • The PayPal Giving Fund says it allows donors to give to a charity of their choice. A class action lawsuit claims the company would, with no notification, redirect funds to different organizations. 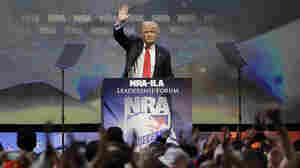 Then-Republican presidential candidate Donald Trump waves to the crowd after speaking at the National Rifle Association convention in May 2016. The NRA supports the repeal of the Obama-era rule. Mark Humphrey/AP hide caption

February 28, 2017 • The president signed a measure into law that rescinds an Obama-era rule aimed at blocking gun sales to certain mentally ill people. The rule would have deemed about 75,000 people mentally incapable. 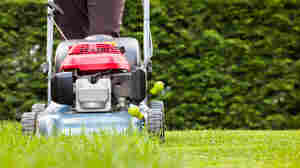 California is looking into ways to reduce the use of gas-powered lawn and gardening equipment because they will soon surpass cars as the biggest polluters in the state. stoncelli/Getty Images/iStockphoto hide caption

February 28, 2017 • Gas-powered gardening equipment will soon surpass cars as the worst polluters in California. It is considering stronger emissions standards for small gas engines and incentives to switch to electric. 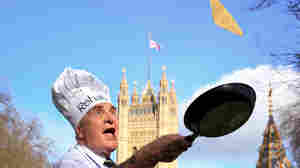 February 28, 2017 • The last day of February is called Pancake Day in the United Kingdom, and it is marked by pancake races. Teams run pan in hand toward the finish line in a tradition going back hundreds of years.

Trump Plans To Add $54 Billion To Defense Budget. How Much Can That Buy?

February 28, 2017 • The Trump administration is reportedly proposing to add an extra $54 billion to the Pentagon budget. NPR takes a look at how much $54 can billion buy.

Trump Plans To Add $54 Billion To Defense Budget. How Much Can That Buy?

February 28, 2017 • SpaceX claims it will launch the first ever private moon mission in 2018, which would send people to the moon for the first time in 45 years. The announcement may signify the start of a new race to the moon, this time between NASA and the private space industry.

February 28, 2017 • President Trump takes action to roll back another environmental regulation. The Clean Water Rule extends federal authority over smaller streams and marshes, but farmers, builders and others say it goes too far.

February 28, 2017 • HMD Global will be relaunching the Nokia 3310, the iconic phone that originally came out in 2000 and became one of the best-selling mobile phones ever.