Accessibility links
The Zen of Hip Hop: Or, Russell Simmons Unplugged : News & Views You gotta check out today's interview with Russell Simmons. Props to producer Roy Hurst for taking 40 minutes of raw tape and cutting out most of the cursing and shouting... but leaving in just enough to give you a sense of how things went in the ...

Listen
The Zen of Hip Hop: Or, Russell Simmons Unplugged 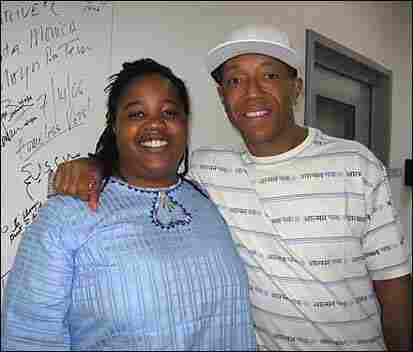 You gotta check out today's interview with Russell Simmons. Props to producer Roy Hurst for taking 40 minutes of raw tape and cutting out most of the cursing and shouting... but leaving in just enough to give you a sense of how things went in the studio.

Russell Simmons is a hard man to book for an interview, so when he scheduled with us for a recent Friday we leapt at the chance. He rolled into NPR West six deep with people on cell phones: mainly burly men who did not smile. His shoes were arctic white, probably Air Force Ones, though I'm not up on the sneaker game. His shirt was covered in sanskrit writing. His hat was purposefully thrust to the side.

You just know some interviews are going to require a bit of energy, and there was adrenaline pumping for me (and I think other members of the staff) well before Simmons was seated in studio.

After all, this is the man who so put out the staff of WGN-TV in Chicago that they ran a blog post called "Russell Simmons: Get Over Yourself"

It read in part:

What we didn't get to in the interview is that SImmons is a proponent of Yoga. Page 71, he writes, "Meditation can help bring you back to a place that you probably forgot even existed. A place where you will know the right choice to make in every situation. A place where you can be in control of your emotions and ignore the distractions that keep you from focusing on what's really important."

Maybe all that sitting in silence caused his inner Ying or Yang to explode. All of the book's quotes from Ghandi about peace and love are fine, but it's all hard to take seriously when the author is cussing on two phones at the same time, and text-messaging his empire, instead of focusing on the people sitting right in front of him.

Anyhow, given that context, just listen to what we got out of him.

Apparently, talking about misogyny is a no-no. Good thing we're doing a special roundtable on gender and hip hop next week!

It's all part of this month's Hip Hop series. And we got a LOT of other great stories up our sleeve.

Anyhow, for me, this ranks as one of my all time favorite interviews. Not favorite the way you might say "chocolate is my favorite sweet," but more like, "this will go down in the annals of my interviewing history."

Hey, it didn't blow all the way up like Gene Simmons on Terry Gross' Fresh Air.... I'm relieved.

Oh, by the way, if you want to get a good decoder ring for some of the buddhist philosophy Russell and I were talking about, check out this great book on Buddhism and African-Americans, Being Black: Zen and the Art of Living with Fearlessness and Grace by Angel Kyodo Williams. Really, anyone can benefit from it... whether you're interested in Buddhist practice or just learning about the philosophy, it's simply written and clearly delivered.

Can't wait to hear what y'all think of the interview! And is Russell, as he says, a servant of hip hop?