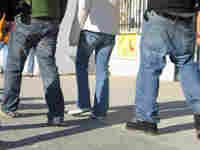 The Atlanta Journal-Constitution: Proposal Would Ban Underwear-Exposing Pants -- "Exposed boxer shorts and thongs would be illegal in any public place in Atlanta if the City Council approves a proposed amendment to the city's indecency laws. The target is young men who wear their pants low off their hips to show off the two pairs of boxers they wear beneath their saggy pants, said Atlanta Councilman C.T. Martin."

Do you think this ordinance is a good idea, or is it just another form of racial profiling?

The New York Times: A New Museum Is Frank in Its Exploration of the Slave-Trading Past