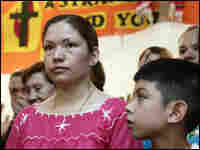 News Headlines: Aug. 20, 2007
Chicago Tribune: Activist Arrested in L.A. -- "Federal authorities Sunday arrested Elvira Arellano on a downtown city street, ending a yearlong standoff that intensified recently after the illegal Mexican immigrant began what was to be a nationwide campaign to push for new immigration reforms."

You tell us: Should Arellano have been deported? Was she singled out for her activism? Where do you stand on the immigration issue, and how do you think it is affecting black unemployment?