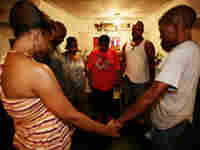 A meeting of the parents of the Jena 6 in Jena, La. Brent Stirton, Getty Images hide caption

The Associated Press: Conspiracy Charge Dropped Against Jena 6 Student -- "A judge dropped one of two criminal charges against a black teen convicted of assaulting a white student in a racially-charged Louisiana school beating case. The dismissal of the conspiracy to commit aggravated second-degree battery charge means that Mychal Bell ... will face at most 15 years in prison instead of 22 1/2."

Have you been following this case? What do you think of the latest developments?

The New York Times: Short on Labor, Farmers in U.S. Shift to Mexico