Accessibility links
For Light-Skinned Only? : News & Views Blogger Jasmyne Cannick weighs in on the age-old complexion tensions in the black community.

This week, we have a submission from blogger and News & Notes contributor Jasmyne Cannick. She writes about the age-old complexion tensions in the black community. 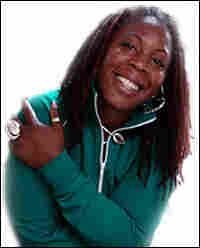 The "Light Skin Libra Birthday Bash," which was to take place at Detroit's Club APT, was the brainchild of a self described "dark-skinned" African-American Detroit DJ and party promoter. The party was intended to let "light-skinned" black women into a downtown club for free. In his defense, Ulysses "DJ Lish" Barnes, said that he had plans for "Sexy Chocolate" and "Sexy Caramel" parties too. The good news is that the parties have been canceled after much criticism and calls for boycotts and lawsuits.

There are no words for some of the ignorant (insert four letter word that starts with an s, rhymes with hit), that we do to ourselves. But let me give it a try.

This evolved into generations of blacks both consciously and subconsciously teaching themselves that one is better than the other which eventually led to a billion dollar fake hair industry.

But who could forget the film version of Alice Walker's novel "The Color Purple," in which Mister asked for Nettie who was "chocolate" colored with long hair but was given Celie, who was dark-skinned with nappy and short coarse hair instead. This was followed by a grown up Celie dealing with the harsh realities of beauty and Mista's in-house mistress, Shug Avery.

Then you had black sororities and fraternities who used the "brown paper bag test" to deny entrance to anyone darker than the bag.

There continues to be black children who prefer to play with dolls that are white with blond hair and blue eyes. Some black children actually identify with these dolls over dolls of their own race, which could explain the 2003 case between two Georgia Applebee's restaurant employees.

At the time, Dwight Burch, a dark-skinned waiter, was an Applebee's restaurant employee. He filed a lawsuit against Applebee's and his light-skinned African-American manager alleging that during his employment, the manager repeatedly referred to him as a "black monkey" and a "tar baby" and told Burch to bleach his skin. Burch claimed he was fired after he refused to do so. His case settled for $40,000.

But what about decades of rap music videos where the preferred "ho" is a lighter shade of brown? And the fact that only recently we're seeing advertisements that highlight black women who chose to wear their hair in its natural state and are dark-skinned, even in our own magazines.

Remember actress Jennifer Beals' famous, "I thought I would never get in. I thought they only took geniuses. But I was lucky, because I'm a minority. I'm not Black, and I'm not White, so I could mark 'other' on my application, and I guess it's hard for them to fill that quota," quote on how she got into Yale University.

Beals, whose father was black, seldom identifies with the black community despite being nominated for an NAACP Image Award. And then there was singer Prince, who despite having black parents, listed in his press bio at one time that he was Italian, among other things, when he made it in the business.

More recently there was the University of Georgia's 2006 controversial study on skin tone which confirmed that light-skinned blacks are often more likely to be considered for jobs over dark-skinned blacks.

Wrap it all together and what you get a classic example of Dr. Joy DeGruy-Leary's P.T.S.S., otherwise known as post-traumatic slave syndrome.

And while our lighter skin shades can be attributed to the Massuh's preference for his female black slaves over his own wife, we can't blame the Massuh for us continuing to feed into the hype that light is good and dark is bad.

Over the weekend, I attended Los Angeles' Taste of Soul Festival. I observed for quite some time the activity at a booth selling hair extensions. Black women, young and old, light and dark, crowded the booth to touch and feel the long straight flowing hair extensions that were guaranteed not to shed to "nap up." This while nearby booths, offering free diabetes, obesity, and HIV/AIDS tests went virtually unnoticed. Go figure.

While the party in Detroit is sad, it's the manifestation of generations of blacks still buying into the slave "house Negro" and "field Negro" mentality given to us by the Massuh. Don't you think there are enough forces out there trying to divide us without us giving them a helping hand?

You know, it's funny I never heard of lighter prison sentences for lighter blacks. Black is black no matter how light or how dark your skin is.

And on a side note, I find it completely baffling that while some of us (Lil' Kim) are out there trying to lengthen, lighten, and straighten our hair, bleach our skin, and even resort to plastic surgery to change our nose, on the flipside they're busy with botox, breast and butt implants, and tanning salons. -- Jasmyne Cannick