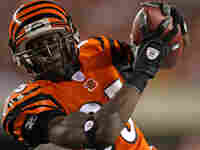 Day two of our sports bloggers' roundtable went off without a hitch today, thanks to David Wilson, Justin Grant and Gregory Lee, all of whom contributed to the conversation in a way that I have always thought people like to hear.

That is to say, their blogospheric points of view were on-the-topic, insightful and interesting. Just what we love to offer the listeners of News & Notes.

Although we touched on the World Series between Boston and Colorado and we also talked about who will be the next Yankees manager, most of the conversation centered on a subject a little closer to home for black sports fans.

The ever-controversial Jason Whitlock's latest missive about the horrors of hip-hop culture on the field of play was something about which all our guest bloggers had an opinion. And what they had to say about Whitlock's assessment -- mainly that bad behavior by black athletes is costing other black athletes job opportunities with pro clubs -- was not what you might think.

They say Whitlock is right about clubs not wanting problem athletes -- take your pick -- but they also said that Whitlock had chosen the wrong sport to make his point.

They agreed that the on-field antics of players like the Cincinnati Bengal's Chad Johnson, et al, are considered unprofessional by league decision makers, but not, they argue, because of hip-hop. And not in football, as Whitlock argues.

Our bloggers contend, as others do, that hip-hop's influence is much greater in the NBA, and that the folks who run roundball have taken a decidely hard-line against it, from rules concerning dress codes to quickly whistled technical fouls for any corn-rowed player who even looks at an official the wrong way. In fact, the NCAA is now even talking about banning cursing on the bench and sidelines.

Hip-hop gets blamed for a lot. Is it deserved? Listen to the sports bloggers' roundtable. It's a conversation you should check out.