Accessibility links
Protesters to BET, MTV: 'Enough is Enough' : News & Views Crowds have been gathering outside the homes of Viacom executives to protest music videos that they say degrade women, and black and Latino men. 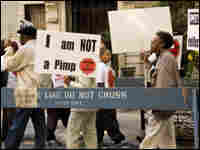 Protesters with the 'Enough is Enough' Campaign hold a rally outside the Manhattan residence of Philippe Dauman, President and CEO of Viacom, Inc. in New York City. Edward Opinaldo, Scoopt/Getty Images hide caption

Talk About It:
New York Times: Protesting Demeaning Images in Media -- "Wearing white T-shirts with red stop signs and chanting "BET does not reflect me, MTV does not reflect me," protesters have been gathering every Saturday outside the homes of Viacom executives in Washington and New York City. The orderly, mostly black crowds are protesting music videos that they say degrade women, and black and Latino men."

The protesters maintain that negative images of blacks and Latinos are so widespread in mainstream media, "they infect perceptions of ordinary nonwhite people."

Do you agree? What about improving black self-perception? What do you think will be the result of these protests?

World:
Reuters: North and South Said to Reach a Pact in Sudan

New York Times: Jay-Z Finds Himself at the Movies