Accessibility links
Andy, Oprah and Obama : News & Views Tony Cox: It's not often that I hear things that make my jaw drop. But I did on today's bloggers' roundtable. 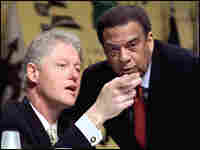 From NPR's Tony Cox:
It's not often that I hear things that make my jaw drop. But I did on today's bloggers' roundtable. The topic was Barack Obama's presidential campaign and the boost he got over the weekend by stumping with Oprah Winfrey through Iowa, New Hampshire and South Carolina.

It was a lively conversation with varying opinions on whether Oprah's political endorsement carries the same cache and clout as her book recommendations. We'll see. It's certainly had an impact so far, providing a political hot button for her massive viewing audience.

But then we turned to Andrew Young, an African-American icon from the Civil Rights Era, whose admonition to Barack Obama to "wait" because he's too young to be president, has been the biggest blogger topic this week.

And that prompted one of my blogger guests today to opine that Young was a "has been" whose contribution to civil rights was no longer relevant in the context of this conversation, or something to that effect. Dumbfounded, I asked if I had heard him correctly that he called Young a has-been. "Yes" came the reply.

Another panelist added that Young sits on the board of Wal-Mart, the suggestion being that his politics are out of touch with the modern political sensibilities of African Americans. A little too "old school" for his own good.

That may be true. And the bloggers' roundtable is the appropriate place to hash out such opinions, as we did today. I welcome them.

But for the record, Andrew Young is no civil rights "has been."

You may consider him old, his ideas outdated, his choice of boards questionable. But to cast aside his contribution to the progress of blacks in this country, and his role in the political history that helped create opportunities for future political stars like Obama, is, well, jaw-dropping to me.

In fairness, perhaps that's not what was meant, exactly. But as a person who remembers when Young was the Obama of his day, so to speak, I'm saddened to think that we sometimes discard "old" black folks along with their "old" ideas. Let's disagree on what he said, but not on whether he's qualified to talk about black folks at the highest levels of political power in this country.

As we get older, and can see our own old age in the distance, our memories get longer and we appreciate what happened before.

So I told my guest today that Andrew Young's civil rights credentials don't need to be vouched for, no matter what people think about his opinion of Obama.

For the record, I also don't agree with Young. Barack is certainly competent enough to run for the presidency, and if he wins, to try to figure out a way to get the job done. Others have. What's age got to do with it?

Funny. That's the same message that applies to Andrew Young.