Tavis to Michelle Obama: Thanks, But No Thanks

Tavis to Michelle Obama: Thanks, But No Thanks 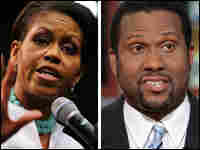 Radio host Tavis Smiley says Michelle Obama is persona non grata at his State of the Black Union being held next week. Smiley initially invited Barack Obama to attend the symposium; but Barack, who is busy campaigning, regretfully declined and offered to send his wife, Michelle in his place.

Here's an excerpt of Barack Obama's letter to Smiley:

In the final stretch, I will be on the campaign trail everyday in states like Ohio, Texas and Wisconsin talking directly with voters about the causes that are at the heart of my campaign and the State of the Black Union forum such as affordable healthcare, housing, economic opportunity, civil rights and foreign policy. I am committed to touching every voter, and working to earn their vote.

That is why with regret, I am not able to attend the forum. I understand that you have declined the campaign's request to have Michelle Obama speak on my behalf. I ask that you reconsider. Michelle is a powerful voice for the type of real change America is hungry for. No one knows my record or my passion for leading America in a new direction more than Michelle Obama.

According to this letter -- and radio host and columnist Roland Martin -- Tavis turned down the offer of having Michelle attend. Read more of Roland's take on it, and listen to Michelle Obama talk to radio host Michael Baisden about this issue.

Should Barack Obama attend this event? Or is Tavis Smiley being irrational?