Accessibility links
Is Obama to Blame for Oprah's Ratings Tumble? : News & Views Oprah's ratings are down, and some are blaming Obama. 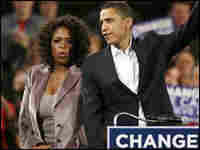 New ratings out for daytime television point to a downturn in viewership for The Oprah Winfrey Show, and a marked decline in the host's popularity. Her daytime audience, which was at a high of nearly 9 million back in 2004-2005, is now down to 7.3 million.

Some are drawing the conclusion that Winfrey's endorsement of Barack Obama for president is turning her Clinton-supporting female viewers away in droves. According to the L.A. Times:

"Before the primaries and caucuses, she was credited with helping to draw impressive crowds and thousands of new volunteers to Obama rallies in Iowa, which he won, in New Hampshire, which he lost, and in South Carolina, which he won.

An October Gallup Poll before the rallies but after her public endorsement of the Illinois freshman senator found her favorable ratings had fallen from 74% to 66% while her unfavorable ratings jumped by more than 50% from 17% to 26%."

While the numbers don't look great, the show's producers aren't drawing any parallels between declining ratings and Oprah's political affiliations.

"Officials of billionaire Winfrey's company, Harpo Productions, profess no concern over the dip in numbers. They say daytime audiences have generally declined and her audience is still about one-third larger than the No. 2 daytime program, Dr. Phil.

Do you think Oprah's support of Obama is to blame for her ratings drop or are people simply losing interest in the talk show queen?