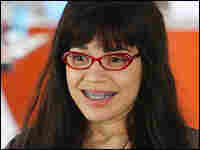 Sawyer is director of the UCLA Center for the Study of Race, Ethnicity and Politics and the author of Racial Politics in Post-Revolutionary Cuba.

I really tried to love the show Ugly Betty. I even like America Ferrera. The idea of a less than anorexic real woman with curves representing a Latina on television is wonderful. I have also been a longtime fan of Vanessa Williams so, why does Ugly Betty offend me?

In my opinion, the show is pseudo-feminism where the bottom line message is that Latinos can assimilate and achieve success by protecting white male privilege. The central message is that if Latinas take care of white men, and don't challenge their undeserved privilege and in fact defend it, they too can be upwardly mobile.

The show not only offends me as an African American but also should offend hordes of Latino men, who are either absent in popular films or television or there is a suggestion that they are so sexist and backwards the only way for a Latina to achieve liberation is through white men.
Let me explain.

The central conflict in Ugly Betty is that Betty is the plump, 'ugly' and awkward secretary of a callow but handsome white male heir to a publication empire with the jewel of the crown being a fashion magazine "Mode." Betty is also secretly in love with him, but this fact is only vaguely foreshadowed to viewers.

When the white man is not busy partying or chasing women, he has to occasionally fight for control of the magazine from his chief rival played by Vanessa Williams -- a black woman who plays the "bitch" on the English language telenovela. The dynamics of the interaction are stunning.

The audience is supposed to cheer by proxy for a white man who has inherited his wealth and position to thwart the ambitions of a black woman, who works harder and tries to survive on her wits, and charm rather than her inherited wealth.

The fate of her boss and Betty, our heroine, are intertwined such that his success is Betty's and vice versa. My problem is, I just can't cheer for Betty or what she represents. Yes, of course, in the world of the beautiful and fashionable, Betty is the underdog. But ultimately her success is tied to protecting white male privilege.

This seems to be Hollywood's twisted interpretation of Chicana feminism. A consistent convention in films is that Latinas achieve liberation and upward mobility in particular from Latin men through sexual liaisons with white men who are not weighed down by tradition and machista culture.

The encounter is not liberating, it is degrading and sexually disappointing compared to her romps with her husband. Machismo or sexism is no less an issue among white men than it is among Latinos.

As an African American, I find this use of Latinos interesting. The film Something New where a character played by Sanaa Laython finds her groove with a white landscaper is so unusual that the film had to be called "something new." Black women are often in movies to save white men and white families but they only on rare occasions have sex at all and let alone with the white men they are there to serve. The careers of Whoopi Goldberg and now Queen Latifah are built on these films. But why the twist with Latinas?

My guess is the answer is in Greogry Rodriguez's book Mongrel, Bastards, Orphans, and Vagabonds. The book itself begins with a celebration of the making of "mestizos" in Mexico through sexual liaisons between the Spanish conquistadors and Indian women. Rodriguez even, at points, dismisses the violent nature of these liaisons to craft a notion of Mexicans happily living between and undermining the color line then and now through assimilation and interracial sex.

Rodriguez, backed by the Los Angeles Times and the New America Foundation, echoes the same message as Ugly Betty: protect white privilege, distance yourself from black people and most of all lay down -- literally and figuratively -- for white men and you to can move up the ladder.

I find the message insulting, racist and humiliating.

But Hollywood is also sending subtle or not so subtle messages that don't help the situation. It needs to stop.