Accessibility links
White Cop Disciplined for Profiling Black Police Chief : News & Views A white police officer confronts a black motorist who turns out to be one of the NYPD's highest-ranking commanders.

A white police officer has been pulled off active duty after harassing the wrong man: Deputy Chief Douglas Zeigler.

The highest-ranking black officer in the NYPD was parked in a department-issued SUV, wearing plainclothes, when two officers approached him. According to the New York Daily News:

"In his briefing to Police Commissioner Raymond Kelly, Zeigler said the two cops, who are white, had no legitimate reason to approach his SUV, ranking sources said.

After they ordered him to get out, one officer did not believe the NYPD identification Zeigler gave him." 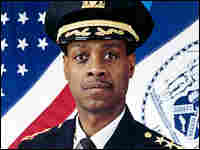 At the same time, the officers in trouble offer a different story:

"When one officer spotted Zeigler's service weapon through the rolled-down window, he yelled "Gun!" according to sources who have spoken with the officers.

Both cops raised their weapons and ordered the driver out of the car, sources said.

Instead of saying he was an armed member of the NYPD, Zeigler shouted, "Don't you know who I am?" the sources said."

Following a rash of highly-publicized incidents involving the police and civilians, some argue that this event further illustrates the notion that racial profiling in the department is alive and well.

State Senator Eric Adams is calling for reform within the NYPD, especially when dealing with minorities.

"Something is wrong with our Police Department and their interactions with people of color," said State Sen. Eric Adams (D-Brooklyn), a former police captain.

The incident was reported as police are being criticized for stopping and frisking record numbers of pedestrians -- about 145,000 in the first quarter of this year. The majority of them were black or Hispanic.

The Rev. Al Sharpton, who has been leading demonstrations in the city to protest the acquittals of three police officers in the shooting death of an unarmed man as he left his bachelor party, took note of the Zeigler incident while speaking at his weekly rally in Harlem.