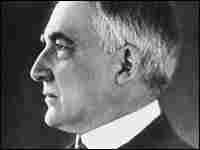 What do they have in common?

Well, if you said they were all U.S. Presidents, you are RIGHT ... but not exactly thinking out of the box.

They are all subjects to claims that they are black, or at least have black ancestors. Throughout much of American history, the "one drop rule" said that if ANY of your ancestors were black, no matter how distant, so were you.

Afrocentric historians have written their piece on why they think there have been several black Presidents. Two books leapt immediately to our mind: J.A. Rogers' The Five Negro Presidents; and Auset Bhakufu's "Six Black Presidents: Black Blood: White Masks.

Today we spoke to Professor Gage and award-winning author Edward Ball (who wrote the bestseller Slaves in the Family) about whether or not there could have been a black president already, and just as importantly, what the conversation says about our collective history.

You can take a listen to our conversation here.

Take a listen and tell us what you think about the possibility that America has already had its big racial "first."