Accessibility links
Cartoonist Speaks His Mind on Obama Cover : News & Views Do you agree with Art Spiegelman's overall assessment of the artistic and social purpose of The New Yorker cover?

The response to the New Yorker's cover, depicting as gleeful terrorist fist-bump-ers Senator and Mrs. Obama (or should that be Mrs. Obama, Esq., since she is a lawyer?) has been pretty unbelievable, here on our blog and, well, everywhere else.

Today we spoke on-air with Art Spiegelman, who has both been a critic of The New Yorker and one of their most famous and controversial cover artists. 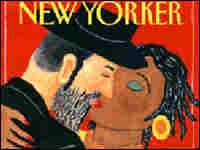 His 1993 cover called, "The Kiss," showed a Hassidic Jewish man and a black woman kissing. It came after tensions between the two groups spurred intense riots in the Crown Heights section of Brooklyn. We asked why he chose that image. Here's his response.

Art Spiegelman: "Huh. Well, lets see. Back then the wounds for that particular set of race riots were very raw still, and I felt as I was just entering The New Yorker with a mandate to see how my underground comic sensibility and The New Yorker's rarefied sensibility might meet. I offered this up as a Valentine's Day cover, because there's this thing called irony. You know if you show people who are murdering each other kissing, it makes one think about why they might have been killing each other. It opens some subjects up to discussion that otherwise were just taken as givens. And I think this cover managed to unite that community like nothing else, which they both hated me for."

I also asked if he thought The New Yorker's Obama cover crossed the line of propriety.

Art Spiegelman: "Of propriety? Perhaps, but I think it did so for an urgent and good cause, which is to blow this stupid calumny about Obama away once and for all. It travels as the subtext through all this polite conversation. I just um, as I was looking around today, saw some NBC report that was quoting a Newsweek poll, saying 50 percent of Americans believe that Obama is or was a Muslim and was sworn in on the Koran to a Senate seat and so on. Madness. And it seems to me that showing the fevered image directly will be a possible way of looking at and dissipating that image. I think, as a result, it's a fairly brave thing to do in which The New Yorker is fulfilling its function at its best which is to make people think and talk."

Finally, he had some thoughts on how the blogosphere is manifesting during this controversy.

Art Spiegelman: "You know, I think that what I've been seeing on the blogs which is kind of an impressive thing since there weren't blogs back in 1993 when "The Kiss" cover was there. All I got to see were sheets of angry letters of one kind or another. Here the letters are there before the ink is dry on the printing press, and there's relatively little reflection so one is sorting through this as it is sorting itself out, but what is happening is there is a discussion about something that need to be talked about, and The New Yorker helped that discussion happen. And it's one of the times when I feel 'hats off New Yorker,' they got it right, you know? This is not something that goes away by saying, 'but it's not seemly.'"

Do you agree with his overall assessment of the artistic and social purpose of The New Yorker cover? Do you think that this cover crossed a line the magazine would not have crossed with a white candidate? And why do you think this hit such a nerve?