Accessibility links
RNC Has Fewest Black Delegates In 40 Years : News & Views The number of black delegates at the RNC is at its lowest in decades. 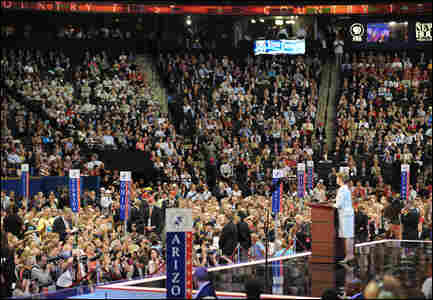 Filmmaker Spike Lee, while being interviewed by CNN's Soledad O'Brien at the DNC last week, challenged the cable network to compare the racial make-up of those assembled at both conventions. The Republican National Convention, Lee implied, would be largely white.

According to a report published on EURWeb, the number of black delegates at the RNC is at its lowest in decades:

In fact, the 2008 GOP event has the lowest number of African American delegates since 1968, according to a convention guide released to delegates this week by the nonpartisan research institution, Joint Center for Political and Economic Studies.

According to the Hudson Valley Press, the Joint Center's guide recognized McCain's efforts to reach black voters, but concluded: "John McCain is very likely to receive a historically low share of the black vote."

Read the full report. Below are a few more GOP-related headlines and op-eds. Share your thoughts.