Accessibility links
The Tax Man Cometh ... To Church? : News & Views Should churches be able to campaign directly on behalf of candidates, while maintaining their tax-free status? 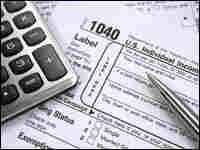 Should churches be able to campaign directly on behalf of candidates, while maintaining their tax-free status?

The group, according to the Washington Post, is recruiting pastors to endorse political candidates from their pulpits on Sept. 28, "in defiance of Internal Revenue Service rules."

The effort by the Arizona-based legal consortium is designed to trigger an IRS investigation that ADF lawyers would then challenge in federal court. The ultimate goal is to persuade the U.S. Supreme Court to throw out a 54-year-old ban on political endorsements by tax-exempt houses of worship.

Yet an opposing collection of Christian and Jewish clergy will petition the IRS today to stop the protest before it starts, calling the ADF's "Pulpit Initiative" an assault on the rule of law and the separation of church and state.

Backed by three former top IRS officials, the group also wants the IRS to determine whether the nonprofit ADF is risking its own tax-exempt status by organizing an "inappropriate, unethical and illegal" series of political endorsements.

The battle over the clergy's privileges, rights and responsibilities in the political world is not new. Politicians of all stripes court the support -- explicit or otherwise -- of religious leaders. Allegations surface every political season of a preacher crossing the line.

What is different is the Alliance Defense Fund's direct challenge to the rules that govern tax-exempt organizations. Rather than wait for the IRS to investigate an alleged violation, the organization intends to create dozens of violations and take the U.S. government to court on First Amendment grounds.

A game-changing factor in this fracas: the Web, namely YouTube, where many churches are now posting Sunday sermons -- including those with political overtones. Here's more from the New York Times:

It is unclear whether the accessibility of evidence on the Internet will produce more or speedier investigations. So far this year, the rate of new cases the revenue agency has pursued roughly matches that in the campaign years of 2004 and 2006 -- when there were about 100 annually, according to Nancy Mathis, an agency spokeswoman.

"What is so fascinating here is that the Internet is instantaneous, and the government is slow," said Frances R. Hill, a professor at the University of Miami School of Law who specializes in nonprofit tax law. "Whether this will speed the government up in the use of its authority remains to be seen. Clearly, what church groups used to spend a lot of time and money doing with voter guides they can now do in a rapid, cost-free way."