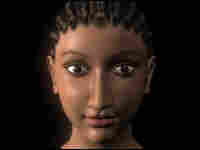 Move over Liz Taylor -- the real Cleopatra just showed up. Researchers have unveiled a new composite image which they say more accurately portrays the ancient seductress. Renowned for her legendary ability to beguile men like Julius Caesar and Roman General Mark Antony, she probably didn't attain her reputation by being entirely unattractive.

The computer-enhanced image takes into account her geography, family history, and various items bearing her likeness. Daily Mail has more:

Pieced together from images on ancient artifacts, including a ring dating from Cleopatra's reign 2,000 years ago, it is the culmination of more than a year of painstaking research.

The result is a beautiful young woman of mixed ethnicity - very different to the porcelain-skinned Westernised version portrayed by Elizabeth Taylor in the 1961 movie Cleopatra.

Dr Ashton, of Cambridge University, said the images, to be broadcast as part of a Five documentary on Cleopatra, reflect the monarch's Greek heritage as well as her Egyptian upbringing.

"She probably wasn't just completely European. You've got to remember that her family had actually lived in Egypt for 300 years by the time she came to power."

So, if Hollywood were to remake Cleopatra with this mixed-race image in mind, who would you like to see play the title role?