Accessibility links
Farewell, Freddie Hubbard : News & Views Timing is everything in this business, so it was an unfortunate twist of timing that prevented us from airing the incredible "Legends" interview we did with the great jazz trumpeter Freddie Hubbard before he died last December 29th. 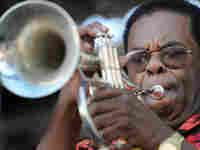 Timing is everything in this business, so it was an unfortunate twist of timing that prevented us from airing the incredible "Legends" interview we did with the great jazz trumpeter Freddie Hubbard before he died last December 29th.

Producer Roy Hurst and I have done many of these in-depth interviews with jazz greats over the last half dozen years here at NPR, and on occasion -- this is one of them -- the experience is quite extraordinary.

Freddie came into our NPR West studios hobbling on a cane, slightly pudgy and seemingly a bit faint of breath. But, as he sat behind the microphone to re-live his life and career as one of the premier jazz performers of the 20th century, he came alive.

He didn't duck any questions, admitting his substance problems that robbed him of his talents, and that he was once afraid of the challenge of going against Lee Morgan and Miles Davis, but pushed on anyway, driven by his own competitive spirit.

There was much more to the interview than we had time to air this week, but we tried to give you a sense of who he was and what drove him to make the music he made. Hopefully, before our show goes off the air March 20th, we will be able to bring you the remainder of that interview, including the fascinating story of what I consider the finest live recording Freddie Hubbard ever made: "The Night Of The Cookers" live at the Club La Marchal.

That night was on an on-stage heavyweight battle between two budding jazz giants, Freddie and Lee Morgan, frantically, breathlessly going head to head. It is a rare, hard-to-find recording, but we have it.

If you are a lover of jazz, you won't want to miss this.