Accessibility links
I See White People : News & Views Has there been a paradigm shift on the discussion of race in this country? There has on News & Notes. 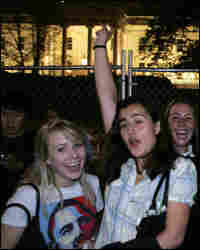 Since the election and inauguration of Barack Obama as President of the United States, our show -- and countless others -- have talked ad nauseam about the issue of race, and what Obama's ascension to the highest office in the land means for America and its citizens -- especially for citizens of color.

But black folks aren't the only ones who have a stake in the success or failure of the new black president. In fact, although we have claimed him as wholly ours, the truth of his mixed-race heritage cannot and should not be over looked.

Is he, as so many have suggested, a post-racial figure?

Do white Americans have reason to fear him?

Today, we committed a major segment of our show to talk with people, whose racial views we too often take for granted. We wanted to hear what white folks think about race and the president, from white folks themselves.

Two bloggers -- a generation apart in age -- appeared on News & Notes to discuss Obama from the white perspective. A third scheduled guest fell ill at the last moment and had to back out.

Was the discussion insightful? Informative? Uncomfortable?

It is not often that shows centering on black issues showcase white guests in this way. But we did, and we will again.

Check it out, and give us your feedback.

Has there been a paradigm shift on the discussion of race in this country?

There has on News & Notes.