Accessibility links
U.S. Won't Label Atrocities Against Rohingya 'Genocide' : News & Views A much anticipated report by the U.S. State Department blames Myanmar's security forces for violence against Rohingya Muslims but does not call the mass killing a genocide. 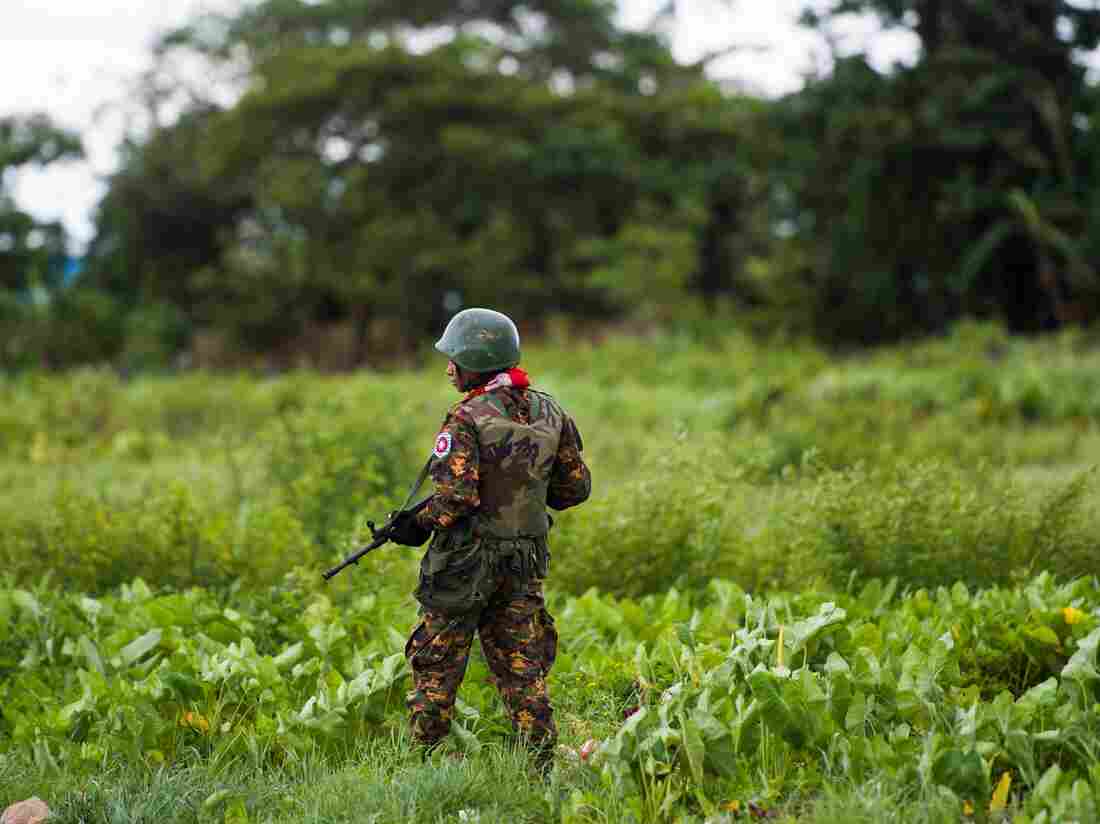 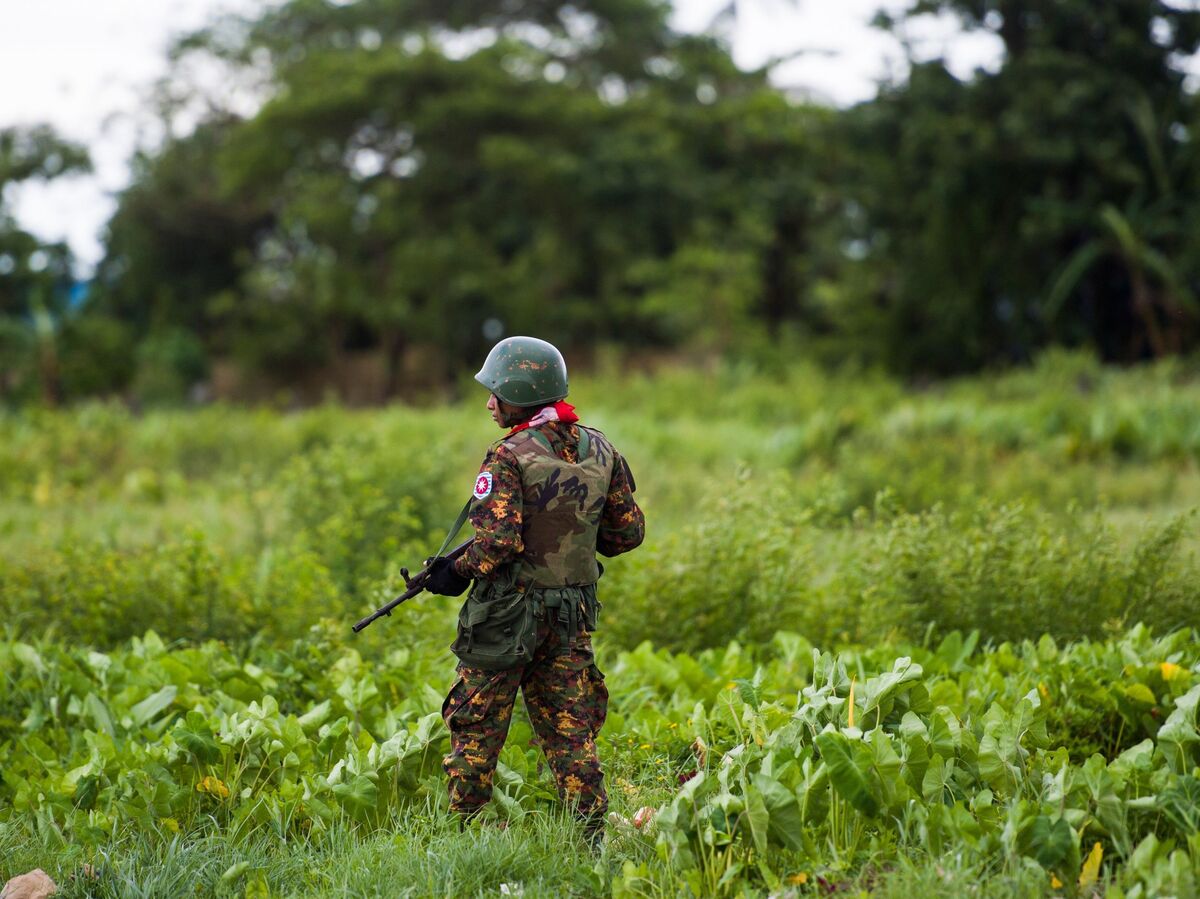 A Myanmarese soldier guards an area at the Sittwe airport in Rakhine state last week. U.N. investigators last month released a damning and meticulous report detailing why six Myanmar generals should be prosecuted for genocide against the Rohingya Muslim minority.

The U.S. has issued a report condemning the violent crackdown on the Rohingya Muslims by the Myanmar military as "extreme, large-scale, widespread." But the report, issued by the State Department on Monday, notably did not label the mass killings a genocide.

That distinction is an important legal one governing how and whether the International Criminal Court may act in these cases.

"We rarely make atrocity determinations," a State Department official told NPR, and "when we do it is only because we judge such a conclusion is warranted after a thorough review of the available facts ... and because we assess that to do so at a particular time will help advance our policy objectives."

The report surveyed over 1,000 Rohingya refugees in Cox's Bazar, Bangladesh, where hundreds of thousands of the Muslim minority have fled Buddhist-majority Myanmar following attacks by that country's military. It is estimated up to 700,000 Rohingya arrived in 2017 following a brutal crackdown by the Myanmar government, which said that it was trying to quash an insurgency. Doctors Without Borders estimates that about 10,000 died in the violence.

The Rohingya who fled in 2017 joined thousands of others already there who escaped during a previous crackdown in October 2016. The U.N. estimates that about 1,000 may have died in that violence.

According to the much anticipated report, "the recent violence in northern Rakhine State was extreme, large-scale, widespread, and seemingly geared toward both terrorizing the population and driving out the Rohingya residents."

The report acknowledges that "the scope and scale of the military's operations indicate they were well-planned and coordinated." It also details systematic rape and the targeting of women and children.

But the probe stopped short of calling the events "genocide" and "crimes again humanity," both of which would meet the legal standard allowing the International Criminal Court to prosecute those responsible for the atrocities.

The report comes at a time when the Trump administration is engaged in an intense campaign against the ICC, pledging never to acknowledge the court's authority. In an address to the U.N. General Assembly Tuesday, President Trump said, "The United States will provide no support in recognition to the International Criminal Court. As far as America is concerned, the ICC has no jurisdiction, no legitimacy, and no authority."

A report by the U.N. last month called for top military brass in Myanmar's army to face charges of genocide over the crackdown on the Rohingya, and last week the ICC chief prosecutor took steps to open a probe into the alleged crimes. Myanmar's military chief responded on Monday by warning against any meddling by the international community.

"The findings are pretty damning and very thorough, so it's surprising that they kind of muted the language to not match the U.N. language," Hunter Marston, a fellow with the Carnegie Council for Ethics in International Affairs, tells NPR.

Marston thinks the State Department might be wary of exacerbating a situation "where we probably don't have influence or the technical means for enforcing accountability or preventing further violence."

A State Department official told NPR in an email that the agency fully supports previous characterization of the events as "ethnic cleansing" but that the agency rarely makes atrocity determinations.

The official said the U.S. will remain focused on improving the situation and holding those responsible accountable and that these findings will inform the decisions of Secretary Mike Pompeo and other policymakers moving forward on those objectives.

Human rights groups were frustrated with the U.S. position.

"It's disappointing the State Department avoided legal determinations, but at this point the dust has settled and we have a very clear picture of what crimes have been committed and how," Matthew Smith, of the Southeast Asia-based Fortify Rights, told NPR in an email.

Smith says the question is now about action and that the administration should be doing more to ensure accountability for genocide and crimes against humanity — starting with pressuring the U.N. Security Council to refer Myanmar to the ICC.

"They should help establish an ad hoc criminal tribunal as well as the creation of an independent mechanism to collect and preserve evidence," Smith said. "These are all options on the table.

The State Department's report came on the same day the Trump administration announced it was almost doubling its aid for the Rohingya in Bangladesh and Myanmar. However, the swell of people has put so much pressure on Bangladesh that the government has announced plans to start moving Rohingya refugees to a remote island in the Indian Ocean next month.

A previous version of this story suggested about 1,000 Rohingya deaths in the crackdown by Myanmarese troops. The 1,000 figure comes from the U.N. and refers to violence in 2016. Doctors Without Borders suggests violence in 2017 killed about 10,000.