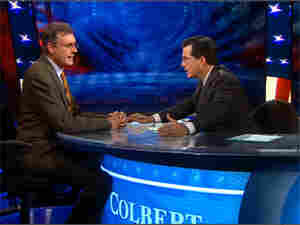 Last night NPR correspondent John Burnett appeared on The Colbert Report to talk about his experiences covering Mexico's drug war and the border — and the particular dangers and obstacles for journalists. (This is Comedy Central, after all.) It's a beat John, who's based in Austin, has been reporting for years.

Stephen Colbert (who at one point channeled his Cuban alter-ego Esteban Colberto) asked John about journalists as a target for killings, whether legalizing drugs in the U.S. would ease the violence and how Mexican citizens are staying informed when their media are threatened from covering the drug war.

Colbert was typically hilarious, and John was a true pro. Watch the clip here .