The tornado in that swept through Tuscaloosa late last month.

Last week we heard from our colleagues in the South who were in the trajectory of the massive tornadoes that touched down in Alabama on April 27.

Elizabeth Brock, director of the Center for Public Television and Radio at the University of Alabama, describes the scene in Tuscaloosa:

The tornado was up to a mile wide in some places. Once it touched down in Tuscaloosa, it stayed on the ground for nearly two hours traveling through Tuscaloosa neighborhoods and business districts into Birmingham. Some of the neighborhoods and smaller communities have been completely wiped out.

Tuscaloosa took the brunt of the direct hit. When you go into the communities, it's the most incongruous sensation. Visually, it's a war zone — homes leveled for blocks and blocks — but the air is sweet with the smell of pine from all the uprooted trees. I'll never forget that contrast.

The tornado and devastating storms reinforced the need for public broadcasting in Tuscaloosa.

"I've redefined my definition of 'essential employees,'" Brock says. "We are employees of the University of Alabama and understandably they asked only essential employees to come to work. For many people [who lost power] the only broadcast available is a radio. Then, in that situation, all the staff becomes essential."

The University's commercial television station was among those who lost power. Without any way to broadcast, their reporters and staff joined Alabama Public Radio's efforts to inform the community.

"We reach about two-thirds of the state of Alabama," Brock says. "During the storm and the aftermath we had to reinvent ourselves from feature-based programming to live, wall-to-wall, this-is-where-you-go-to-find-your-dog coverage."

The coverage has been crucial to those most affected by the storms, she says.

"Major parts of the city did not have electricity for several days, Brock says. "That limited [residents'] options. They couldn't get online. They couldn't watch TV. Even in the days of new technology and so dominated by television, it's a reminder of how valuable radio is."

"Some areas were devastated," he says of the EF-5 (wind speed of more than 260 mph) tornado that blew past Huntsville. "Just swept right off the face of the Earth." 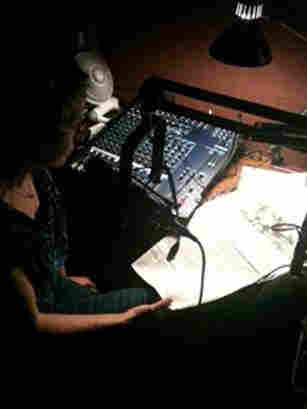 WLRH's back up generator provided enough power to run a small board, a microphone, a computer and a light so Morning Edition host Ginny Kennedy could report the latest developments of the storm. WLRH hide caption

The storm knocked out power to the entire city, he says. No traffic lights, no gas stations, and the grocery stores could only accept cash for the first few days. At WLRH, which is located on the campus of the University of Alabama in Huntsville and serves much of northern Alabama and parts of south central Tennessee, Tannehill and the rest of the staff have relied on generator power to stay on the air.

"With no power at the station, we relied on a back-up generator that could run for eight hours until we had to stop broadcasting to recharge it," Tannehill says. "It gave us enough power to operate a small, 8-track mixing board, one computer, a light and the microphone. We were definitely operating 'caveman' style."

In spite of these limitations, Tannehill filed spots for NPR's Newscasts and worked with the WLRH staff to keep the community informed even through four different tornado warnings.

The station staff came to work each day ready to do whatever needed to be done to cover the destruction of the tornado, while they were worried about the safety of their own homes and families. Tannehill says that they just focused on what they could do today and how to get that done.

In short, they were just doing their jobs. Just like they do every day and especially when it matters most.