How Public Radio Scotch-Taped Its Way Into Public Broadcasting Act

How Public Radio Scotch-Taped Its Way Into Public Broadcasting Act 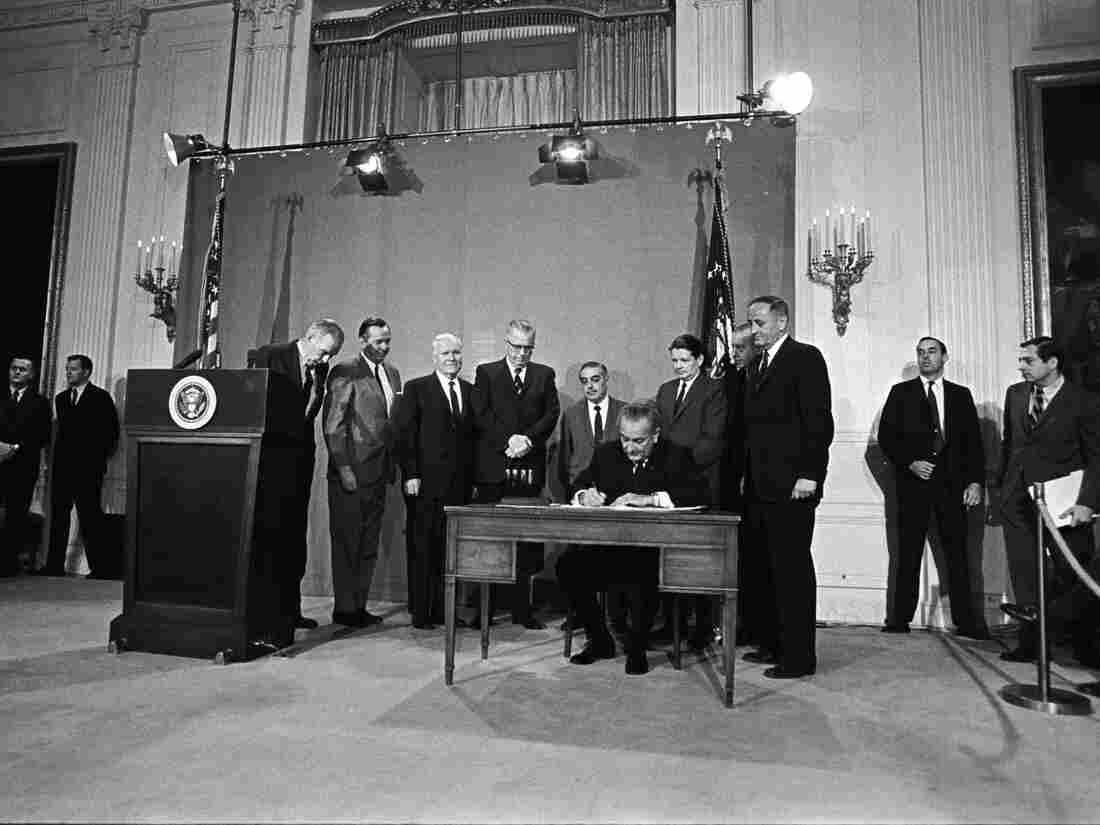 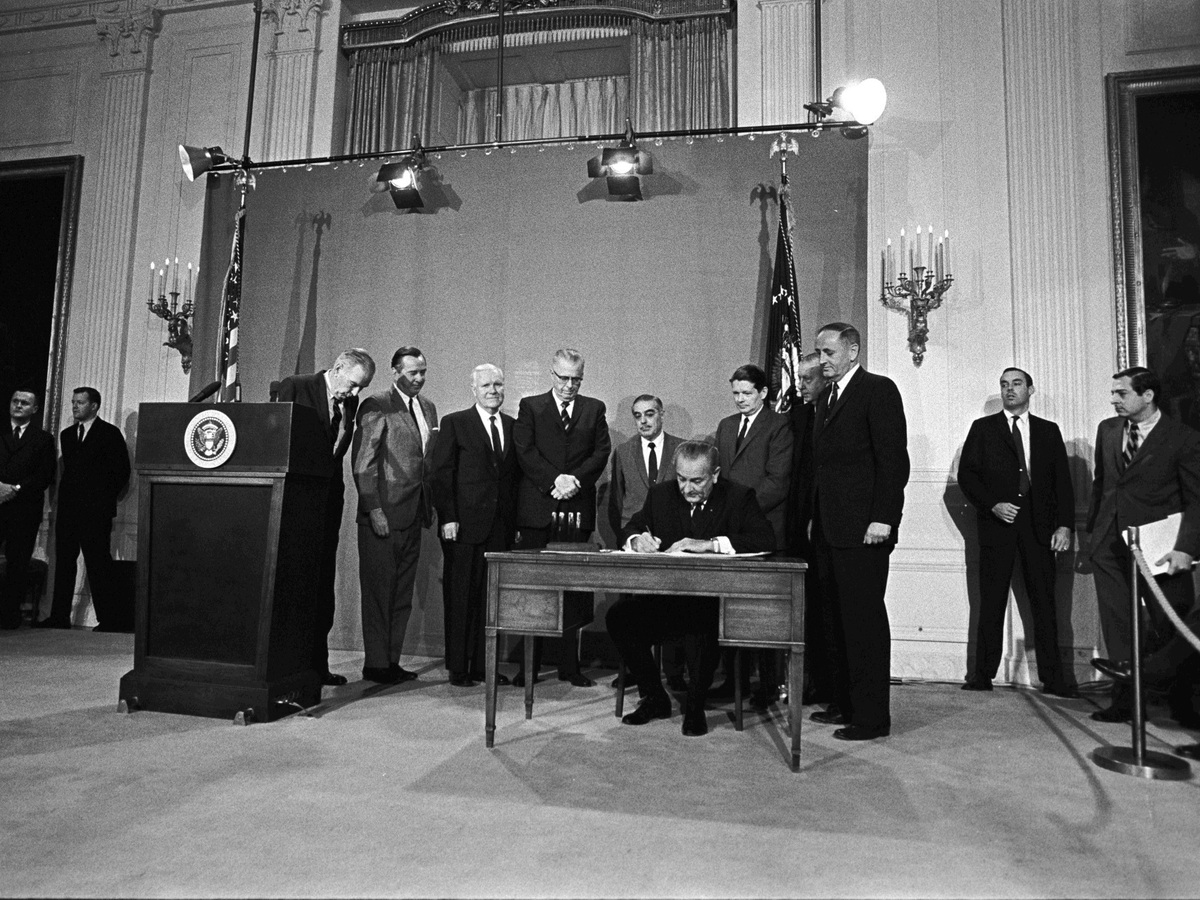 President Lyndon B. Johnson signs the Public Broadcasting Act of 1967, in the East Room of the White House.

Forty-five years ago this week, President Lyndon B. Johnson signed the Public Broadcasting Act of 1967. Aligned with his vision for a Great Society, Johnson's signature on that legislation created the Corporation for Public Broadcasting, paving the way for the incorporation of National Public Radio, just a few years later.

In that historic document, approved by Congress and blessed by the president, the words "and radio" were literally Scotch-taped into the text following every mention of "television." 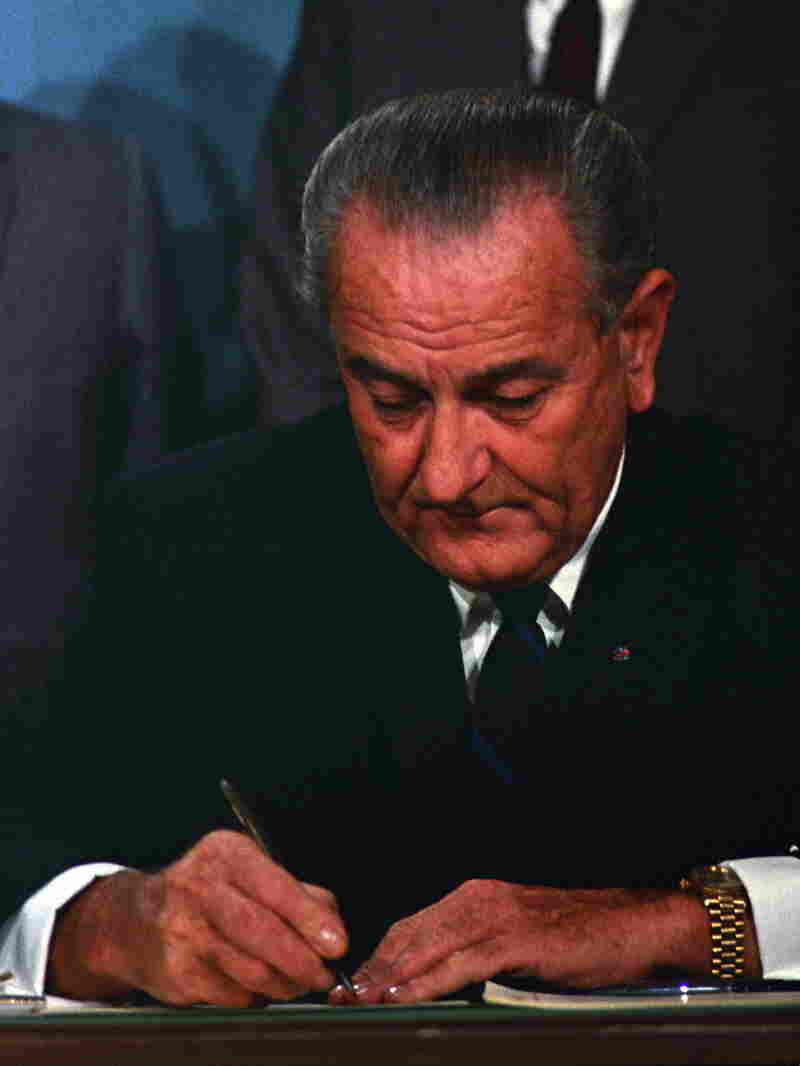 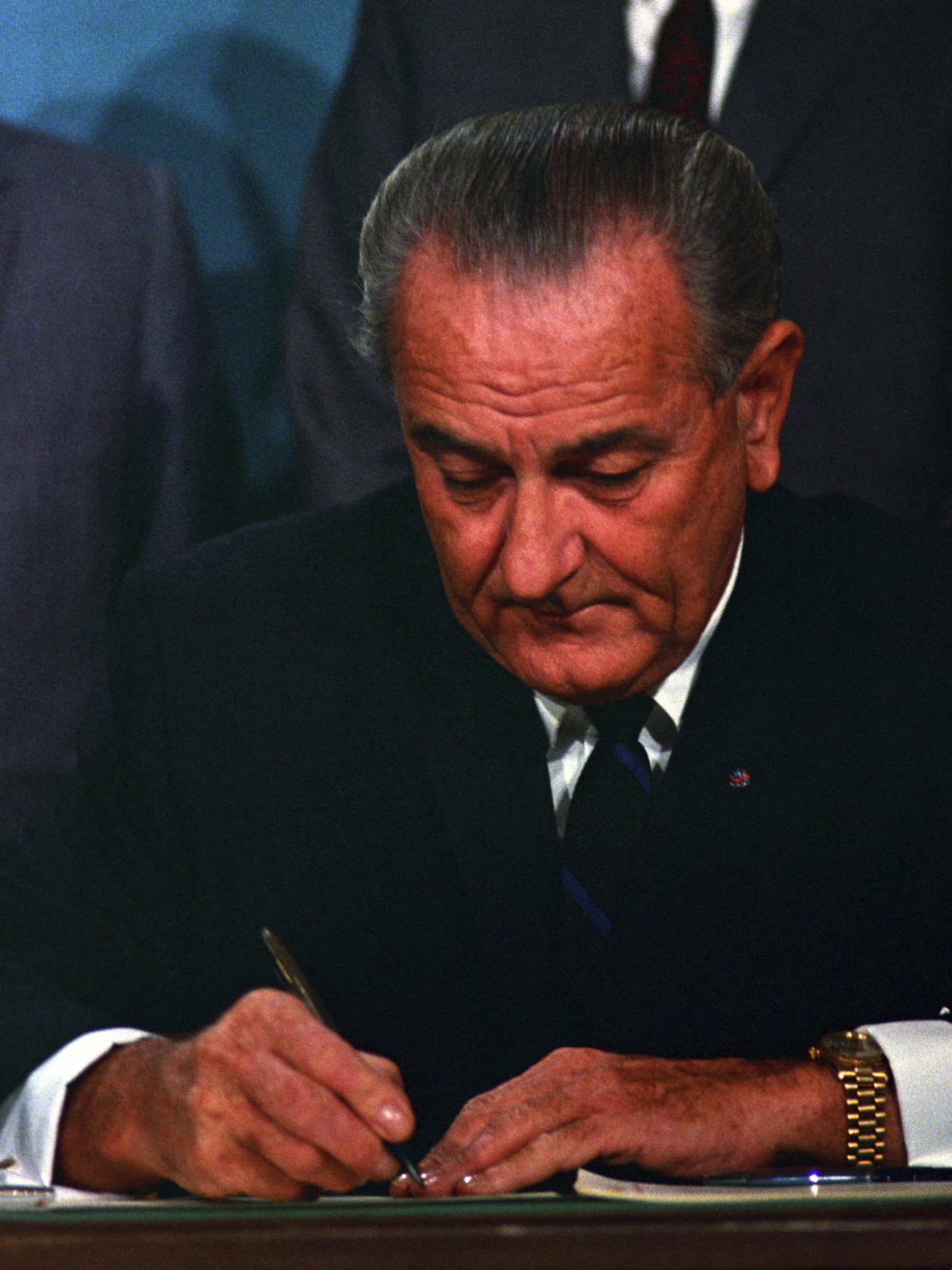 Public broadcasting has come a long way since 1967. We're on the air, we're online, we're on smartphones, tablets and Twitter. We're in taxi cabs, work commutes, classrooms and military bases. We're on more than a thousand local public radio and television stations.

We're there when disaster strikes, providing citizens with emergency information that keeps families safe. We're in 98% of urban and rural America, serving you with the best in news, education, music and entertainment programming.

When President Johnson signed the act into law, he said that he and the 90th Congress envisioned an America that was enriched by knowledge and ideas:

"We in America have an appetite for excellence, too. While we work every day to produce new goods and to create new wealth, we want most of all to enrich man's spirit.

"That is the purpose of this act."

Much has changed in 45 years, and public broadcasting has evolved in ways its founders could never have envisioned. But our mission remains the same. We continue to serve our 170 million listeners and viewers, in nearly every geographic location and platform possible, with programming that enriches the spirit.

As we celebrate the signing of this landmark legislation, take moment to thank your local public radio or TV station for their service.

Jessica Schreibstein is a member of the NPR Policy and Representation team.

In his book Listener Supported: The Culture and History of Public Radio, Jack Mitchell writes that however inconspicuously "and radio" may have been included into the bill's original text, those words had been just as slyly removed just days before it was to go before President Johnson. He writes about how the bill's author and President Johnson's assistant in charge of public television legislation put radio back into the bill:

"In fact radio had been taken out, and they had to put it back. So crudely did they do the job that the finished document clearly shows where they taped the insertions into the original draft and then photocopied the pages. The typeface of the inserts doesn't even match that of the document. So, via some midnight oil and Scotch tape, radio got into the President's draft of what was still the Public Television Bill creating the Corporation for Public Television."

Of course, just slipping in "and radio" isn't the whole story here. Even before the Scotch tape caper, the public radio supporters, were somewhat of a "guerilla operation," writes Mitchell.

Jerrold "Jerry" Sandler and Scott Fletcher were on the opposite sides of the same coin, literally and figuratively. Both worked for the National Association of Education of Broadcasters, the joint radio-TV professional organization, Sandler was a lobbyist representing radio and Fletcher for television. Fletcher had been more fruitful in securing money for television and Sandler knew radio needed to be part of the new corporation to survive. So he went to Fletcher to ask. Their conversation was recounted by Sandler in an 1978 interview with Burt Harrison:

Sandler: "Scotty, I know that, and I believe you, and I'll always love you for it, but we have a problem on our hands. We are being totally neglected in this. You know better than I that you can't put it aside for a later time. The future is now."

Fletcher responded that the issue was decided. The act would be the Public Television Act and the corporation, the Corporation for Public Television. To bring radio in at that point, he concluded, would "change the scenario."

"So be it," Sandler replied.

"But you can't change the scenario."

"Why not?" Sandler persisted.

"Because it's been written that way; it's got to be that way," Fletcher answered.

"Well, the word broadcasting doesn't have the right sound. It's not television."

"You're damn right, it's not television," Sandler replied.

At this point it appeared that even Sandler's passion would not alter the fate of public radio. The text of the bill would include radio, but the title would remain the Public Television Act of 1967, and it would call for the creation of the Corporation for Public Television.

Text from the Public Broadcasting Act of 1967. Current.org hide caption

Then, in a reversal of fortune, when the act made it to the Senate a name change was suggested by Senator Robert Giffin, and the bill was eventually passed as the Public Broadcasting Act and the Corporation for Public Broadcasting. Mitchell continues the story:

"The public radio guerrillas could not believe their good fortune. They had had no right to win over the television juggernaut, and few of them had believed they really would.... Their improbable victory made possible National Public Radio and all of the local stations that compose public radio today."