Accessibility links
Host ProFile: 'It's pretty much a journalistic playground.' : NPR Extra NPR Host and Correspondent Rachel Martin offers insight into her exciting year - marriage, a baby and a year-long stint hosting Weekend Edition Sunday. It's part of our ProFile series introducing the people behind our programming, the diverse and inspired personalities that make NPR, well, NPR.

Host ProFile: 'It's pretty much a journalistic playground.'

Host ProFile: 'It's pretty much a journalistic playground.' 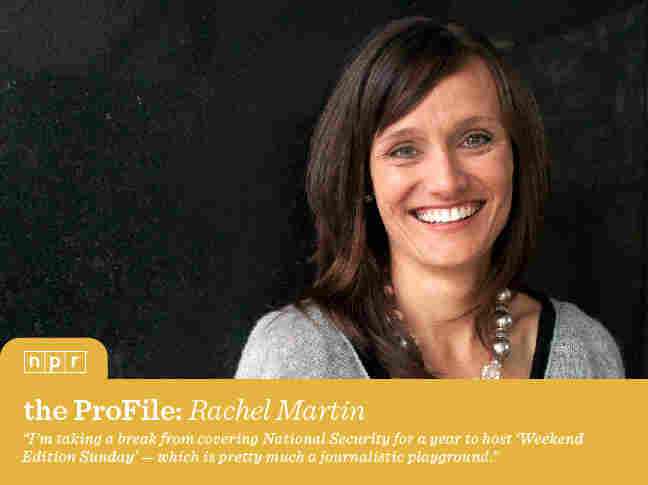 The one word I always stumble over on air is..."both". Apparently, I like to put a random "L" in this word when I say it – like "bolth." Maybe it's an Idaho thing.

When I go into the studio, I always have... a pen. Even if I don't write anything down. For some reason, I can't think without a pen in my hand.

The Newscast headline reporting the last year in my life would be... "Good things Come in Threes!" (I got married, had a baby and got to host Weekend Edition Sunday – what a year!)

On Sunday morning, you'll find me... in the studio, with a big mug of coffee (loads of milk and sugar) ready to make radio.

I've learned the most about radio from... all the amazing editors I've gotten to work with over the years: Doug Roberts, Kevin Beesley, Steve Drummond and Bruce Auster.

When I tell people I work for NPR, they often say... "I love NPR – do you know Sylvia Poggoli?".

Growing up, I wanted to be... a Broadway singer.

This ProFile feature is just one in a collection of profiles introducing you to the people who bring you NPR. These are the journalists and staff - the names you know and those you don't - who are behind the programming you experience every day that makes NPR, well, NPR.