Accessibility links
Beauty In A Place Of Misery: Laura Sullivan On Her Night At Alcatraz : NPR Extra A few weeks ago on All Things Considered, NPR Investigative Correspondent Laura Sullivan told the story of Bill Baker, a former inmate at Alcatraz, who came back to spend a night in his former cell. We wanted to know more, so we asked Sullivan a few more questions.

Beauty In A Place Of Misery: Laura Sullivan On Her Night At Alcatraz

Beauty In A Place Of Misery: Laura Sullivan On Her Night At Alcatraz

A few weeks ago on All Things Considered, NPR Investigations Correspondent Laura Sullivan told the story of Bill Baker, a former inmate at Alcatraz, who came back to spend a night in his old cell.

The thought of spending a night in this infamous prison while getting the perspective of an inmate was such an incredible story that we wanted to know more.

So, we talked with Sullivan to hear more about her night at the Rock. Especially the ghosts. 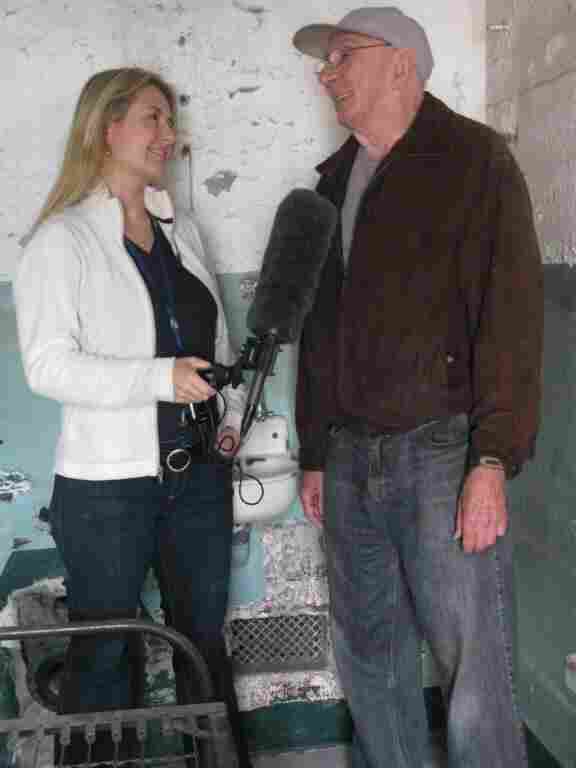 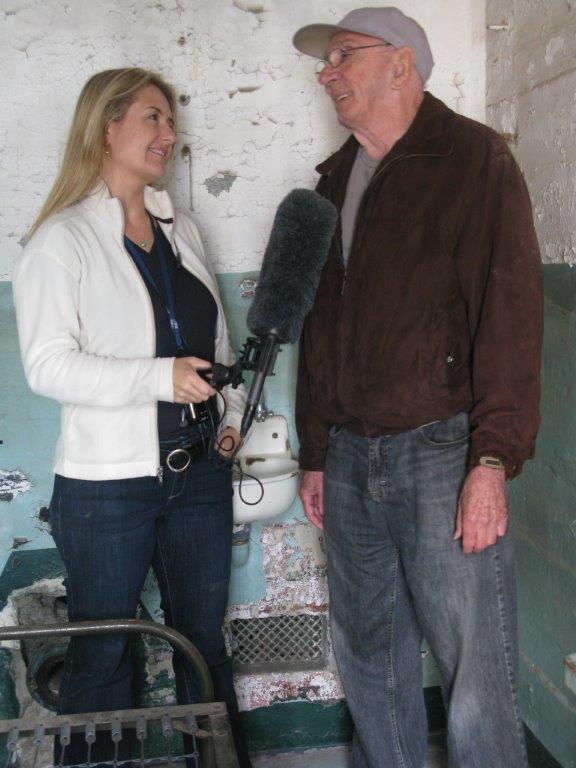 Laura Sullivan interviews Bill Baker in a cell at Alcatraz.

Q: How did you find Bill Baker?
Laura Sullivan: I had heard years ago from a park ranger on Alcatraz that on rare occasions former inmates would come back and spend the night in their old cells. It didn't happen very often and was becoming rarer because there were so few former inmates left.

From time to time I would call up that ranger, John Cantwell, or as Alcatraz visitors know him, "Ranger John," and ask him if he's heard of anybody coming? Sure enough, this summer, Ranger John called me and said he thought an inmate might be coming to stay.

The National Park Service and the Alcatraz alumni group, which is made up of former guards and their families, graciously allowed me to tag along. His name was Bill Baker and he was 80 years old.

Q: What was it about a former inmate sleeping overnight that you thought would make for good story?
LS: To me this story was about more than just a famous historic prison and former convict. I wanted to get to the bottom of the human story, about the choices we make throughout our lives and what it is like to come to terms with them as we grow older. I think we're all looking for answers that make our lives make sense. Bill Baker got to search for those answers in a dramatic and compelling place.

Q: What did you expect before meeting Baker?
LS: I didn't know that much about him. I had read his book on the plane before I arrived. I was just crossing my fingers that, as we say in radio, he could talk. He didn't let me down.

Q: Did anything about your interview surprise you?
LS: Bill Baker is ridiculously funny. He's dead pan. I asked him what he brought for dinner on his big journey back to the past. He looked at me without missing a beat: "Chips and guac," he said, as if that is the only thing a person would ever bring to spend the night on Alcatraz. I told him I brought cheese and bread. He told me I was an NPR cliché.

But more than that, I was impressed by his introspection. I envied his ability to see where he'd been and what it all could mean. You can't ask for more in a radio interview.

Q: What did you learn about the experience of the prison that you couldn't have known without the first-hand account?
LS: Ghosts. Alcatraz has a reputation for having a lot of ghosts. Televisions shows from all over ask to stay overnight, try to capture ghosts on camera and make a show out of it. It's easy to understand why. The place is creepy. It's dark and damp and the smallest noises echo down the concrete hallways. The medical ward looks like something out of an insane asylum with old metal contraptions that resemble torture devices. All the while the wind is whipping through the broken windows and the fog horns are blowing in the distance.

Baker and I walked that entire prison, looked in every last room and laid awake in our cells for hours. I never saw any ghosts and he said he didn't see any either. I think it is the history of the place that haunts it.

Q: There were some raw moments in the interview, was that hard to hear or experience?
LS: It was difficult when he cried, especially in the prison yard. It was such a painful moment for him. It felt like decades of emotion coming to the surface. That's one of the hardest parts of being a reporter sometimes.

Q: Was there something Baker said/did that didn't make into the on-air piece?
LS: Bill Baker was obsessed with his replica tin prison cup. He saw it in the gift shop and made a beeline for it. He carried it with him all day and filled it with water and set it by his bed at night. He said it was one of those items that took him back the moment he saw it. He said they used to use it to bang on the cell bars when they were upset or happy or just to get another inmate's attention.

Late at night when we were there, he came to the cell I was sleeping in, which was next to his, and banged the cup on the bars. He said he had an idea. He had never been outside the prison at night. We walked out the front door of the prison in the dead of night to see the fog rolling in under the Golden Gate Bridge while the lights of San Francisco were still sparkling in the water. "Look at this view we missed all those years," he said.

A place of such misery suddenly became beautiful.