Accessibility links
Alt.Latino ProFile: 'Everyone Has A Fascinating Story, You Just Have To Listen' : NPR Extra Jasmine Garsd has been co-hosting NPR Music's Alt.Latino from Mexico City since last summer. This week, she reunites with co-host Felix Contreras in Austin for the first-ever SXAméricas at SXSW.

Alt.Latino ProFile: 'Everyone Has A Fascinating Story, You Just Have To Listen'

Alt.Latino ProFile: 'Everyone Has A Fascinating Story, You Just Have To Listen'

Since last summer, Jasmine Garsd has been co-hosting NPR Music's Alt.Latino from Mexico City, where she's reporting on the area's music and culture for NPR. This week, she reunites with her Alt.Latino co-host Felix Contreras in Austin to celebrate the debut of SXAméricas, a new branch of SXSW geared to connect U.S Hispanics, Latin American and Spanish industry thought leaders. The pair spun tracks at the SXAméricas Opening Night Mixer last night, and tomorrow, will host an intimate chat with French-Chilean rapper Ana Tijoux, whose new album is streaming at NPR Music.

Before leaving for Texas, Garsd put down her mic just long enough to tell us a few stories of her own. If you're at SXSW this week, we hope you'll catch up with her and the rest of the NPR Music team! (And if you're not in Austin, put on some headphones and get there with this SXAméricas Mix from Alt.Latino and NPR Music's Austin 100 sampler). 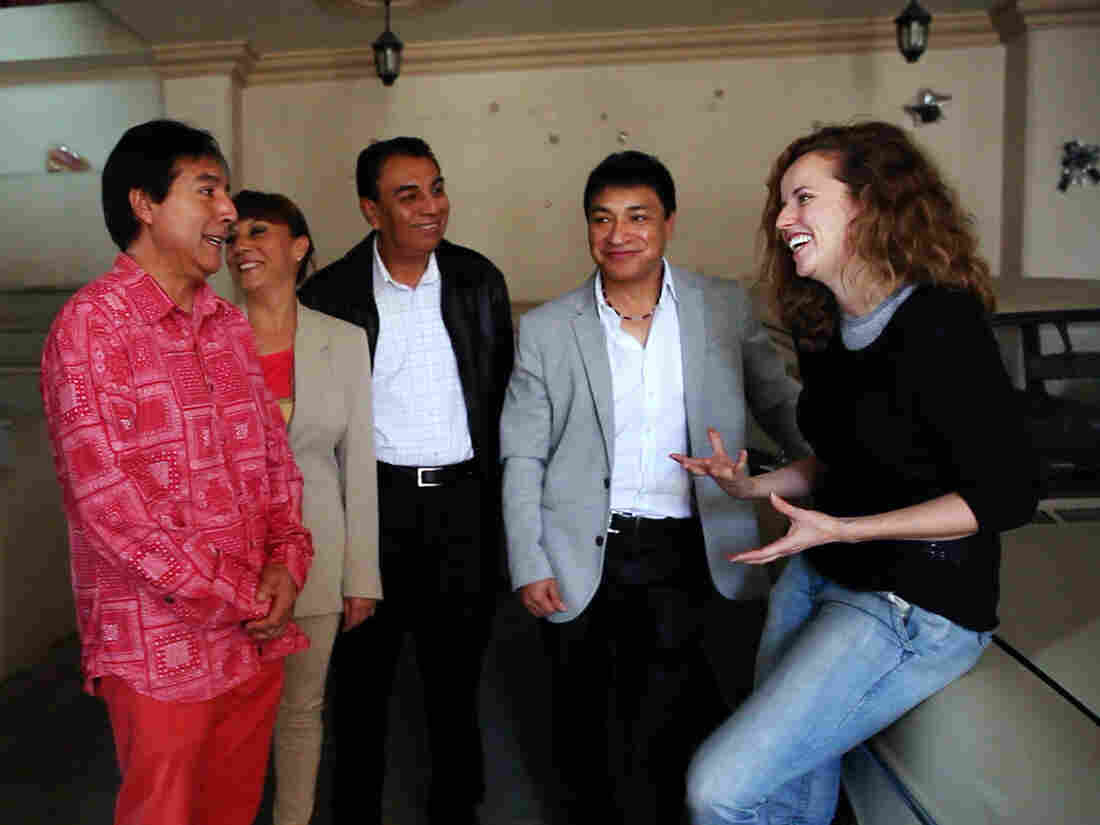 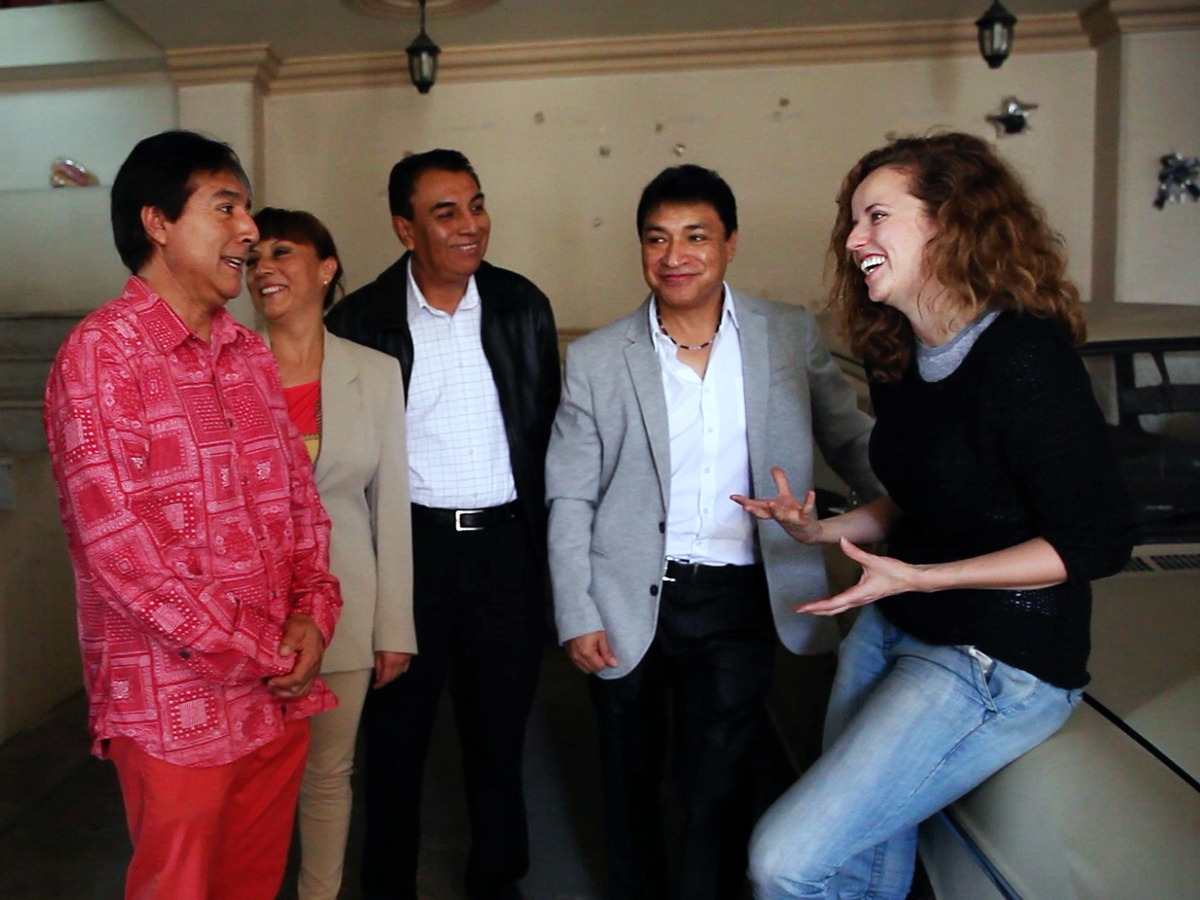 My name is... Jasmine Garsd

My job is... I co-host Alt.Latino, and I report on Latino and Latin American issues for NPR.

My favorite Alt.Latino moment was... we've done a lot of cool interviews - Pedro Almodovar, Manu Chao, Puerto Rican rap duo Calle 13. But honestly my favorite moments are the small ones in which Felix [Contreras] and I crack up until we just can't even keep it together on air. One time I remember Fe kept accidentally calling this woman 'pelusa' which means 'dust glob,' in Spanish and we just had to stop the taping because we couldn't keep a straight face.

More From Jasmine: From Radio La Colifata to KQED, Growing Up to the Airwaves

"Back in Argentina my grandma listened to a lot of talk radio. We used to go to sleep listening to talk radio at night - she'd put her little radio underneath her pillow and it would broadcast the muffled talk shows through the night.

"Around that time, my dad gave me a short wave radio - and at night I'd dial into radio from all over the world: Cuba, India, Egypt. Mind you, we didn't have Internet. It would've been so much easier, but there was something magical about finding the right frequency to tune into an Albanian station, and trying to figure out what country you had dialed into. I didn't always understand what they were saying, but there was something there about people's need to have conversations with each other.

"There's was this great radio station in Argentina - LT22 Radio La Colifata. In Argentine slang, Colifata means 'lunatic'. It's an endearing term for a station held at the neuropsychiatric hospital Dr. Jose T. Borda, in which patients are broadcasters. You always got a lot of truth - sometimes it would be someone endlessly complaining about the heat and mosquitoes (which you had to agree with), but then you always got these moments of honest, brilliant insight.

"When I moved to the U.S., I worked in a lot of kitchens and heard a lot of Howard Stern, who can be gross but he's also a brilliant radio entertainer. I learned a lot from reporter Sarah Varney who I interned with at KQED in San Francisco and probably the most influential person on me has been [NPR Tell Me More Host] Michel Martin, her style of interviewing, her dedication and her fairness with topics at hand."

I wanted to be.... a costume and makeup person when I grew up. I studied makeup and stage design for Opera for a bit at the Teatro Colon in Buenos Aires.

In my suitcase, you'll find... my grandfather's poncho, which I travel with for good luck; my recorder, and a good book. Right now I'm re-reading Octavio Paz' Labyrinth Of Solitude, so you'd find that.

The one thing everyone should know about Mexico is... a lot of bad news comes out of Mexico to the world, but it's a magical, breathtaking and very intellectually-stimulating place. The other day I was jogging at the park by my house - Lago de Chapultepec - and I kept passing through these enormous ancient pre-Colombian statues of heads that are about 12 feet tall, and it occurred to me that I live in a very, very special place.

My next gadget will be... I need a faster way to get around Mexico City. I want to get a motorcycle, but probably I'm just saying that to impress you and will end up buying a bicycle. Or even a tricycle.

If I could share a coffee with anyone... it would be [Spanish filmmaker] Pedro Almodovar. I think he's brilliant. Or flamenco singer Concha Buika. We interviewed both this year, and I fell even more in love with them.

Tell Me More... about your story. [On] one radio show I would listen to as a kid - once a week the host would ask listeners to call in and say 'What is your master problem in life at this moment?' You'd think you got a lot of whining, but in the end people would call in with some fantastic stories (one listener called in every week complaining about a ghost), ethical concerns, moral dilemmas and everything in between. I learned that everyone has something interesting to say if you listen hard enough.

On Sunday morning, you'll find me... waking up hanging by my jacket from a chandelier wondering what on earth happened. NOT TRUE! You'll find me having a cup of coffee with a friend or a newspaper.

Wait, Wait... Don't Tell Me... that I'm running out of Game Of Thrones episodes to catch up on. I have no idea what I'm going to do once that happens. Maybe I'll go out into the sunlight.

I'm not as... outgoing as I sound. I actually am pretty shy, which is why I chose a career that lets me talk to people in a dark studio behind a mic ;)

The one word I always stumble over on air is... I can't quite pronounce 'au' or 'eu' in English. I get very neurotic when I have to say the word 'neurotic,' and don't get me started on 'astronaut'.

I use social media to... keep in touch with friends and family, share ideas, keep tabs on my sworn enemies.