Accessibility links
NPR Podcasts Turn 10! : NPR Extra To celebrate, we're looking back at what has happened in podcasting over the last decade and sharing a special collection of NPR podcast episodes hand picked by the people who make them.

New technologies come with a big asterisk. We can never be sure whether they'll catch on and stick around for more than one or two seasons worth of holiday promotions. As a media organization, we're constantly investigating these new tools – and sometimes creating them – to make things better for people on the other side of the speakers or screens. 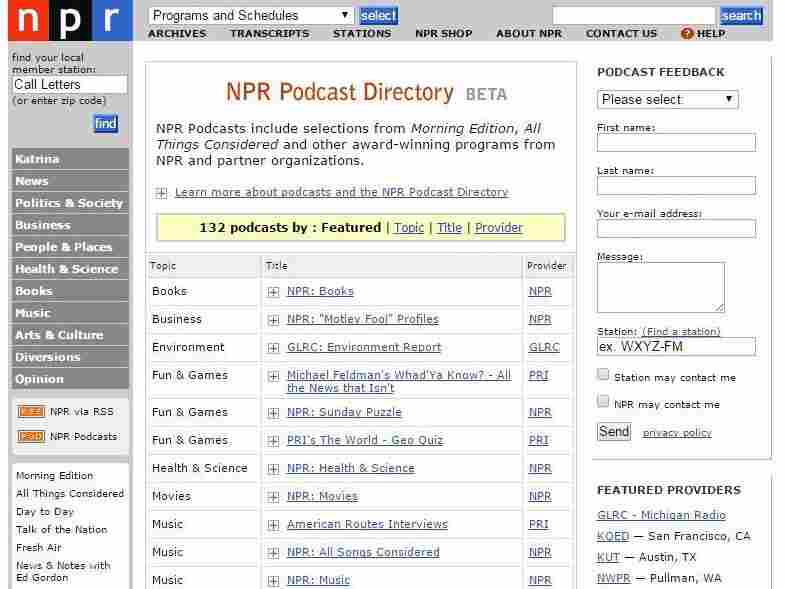 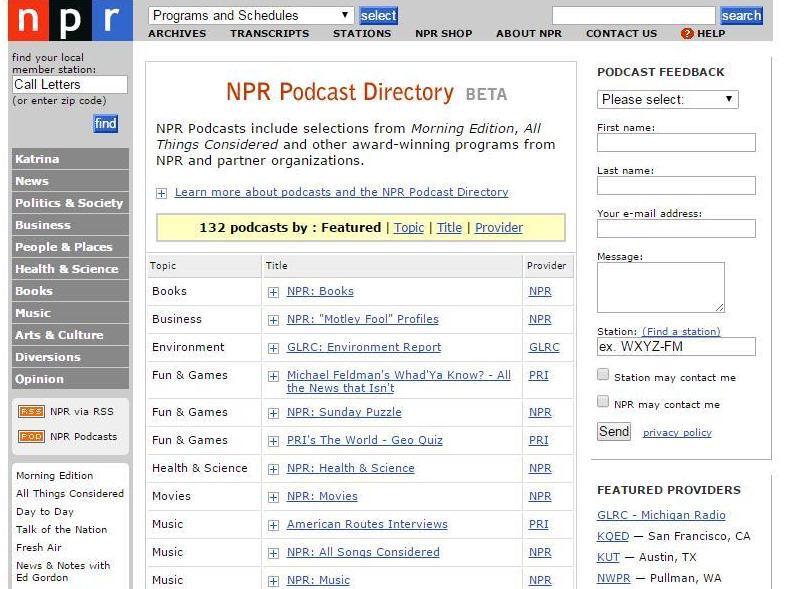 The NPR Podcast directory circa 2005.

Ten years ago today, NPR podcasts made their debut, with a directory of 170+ programs created by NPR and public radio stations. At the time, we didn't know whether podcasts would crash and burn next to minidisks, but the format was a beautiful match for the audio programming our journalists had been shaping for decades, and it had potential. Potential to let us think about programming in new ways, to stick with our audiences as their lives became more on-demand and to take that step forward with our existing network in public radio.

Our history in the podcast space since then is an interesting gauge of how much times have changed – for producers and consumers too. Between NPR and all of the public radio stations who contributed shows to those first collections in the directory, it took about a year and a half to reach 80 million downloads. Last month, we had 76 million downloads for just those programs NPR produces or distributes, and public radio stations are seeing record high listening on their own shows.

Apple launched iTunes in the summer of 2005, and not long after, Bryan Moffett, an analyst on the team that had recently launched our podcasts, traveled to the west coast to meet with Odeo, one of the first podcast directories that also had tools for creating and publishing podcasts from a browser.

A Brief History of NPR Podcasts

August 2005: NPR podcasts make their debut at www.NPR.org/podcasts with 174 programs, 17 NPR-originals. Gigaom wrote of the launch: "Acura is a main sponsor for NPR podcasts and some estimates say that this is probably the biggest podcast advertising buy till date."

November 2005: NPR doubles the number of original titles, adding The Diane Rehm Show and The Kojo Nnamdi Show from WAMU. alt.NPR brand launches, and All Songs Considered, already one of NPR's most popular podcasts, introduced "Open Mic Music," a tool that allowed artists to record a podcast intro, pair it with their music, and upload it for listeners to hear and vote on.
- Downloads: 5 million for all NPR and public radio programs

February 2006: Wait Wait...Don't Tell Me! premieres as the first full program podcast from NPR.
- Downloads: 13 million for all NPR and public radio programs

May 2008: NPR and This American Life broadcast "Giant Pool of Money," a collaborative reporting project released in the wake of the global financial crisis. It leads to the creation of the Planet Money podcast, produced by an NPR team that works to explain the global economy in ways everyone can understand.

December 2008: NPR launches a new online feature called "Mix Your Own Podcast," making it easy for public radio fans to customize their podcasts by selecting from subject, program, station and favorite personalities.
- Downloads: 300 million for all NPR and public radio programs

December 2014: "Planet Money Makes A T-Shirt" wins 2015 duPont-Columbia Award. The project, which the awards jury called a "tour de force," was made possible by a Kickstarter campaign, the most successful in the journalism/publishing category to date.

February 2015: Invisibilia reaches 10 million plays less than one month after its release.

May 2015: NPR and member station podcasts become available in NPR One.

Coming in September 2015: NPR will premiere the Hidden Brain podcast and participate in the IAB podcast upfront showcase in New York.

"It was pretty innovative for the time," says Moffett, now the GM of NPR's sponsorship team. The company wanted to work with NPR in distributing our podcasts, but they were struggling to compete with iTunes now that Apple had introduced podcasts into the mix.

"I remember leaving their offices that day and saying to Bruce Melzer, NPR's [then] director of business development, 'Man, those guys are toast,' since Apple had quickly dominated the podcast directory space," Moffett said. "Except, 'those guys' were Evan Williams, Noah Glass, Jack Dorsey and Biz Stone. Pretty much while we were there talking, they were working on the side project that would become Twitter."

The Twitter creators weren't alone in the risk and experimenting that came with being an early adopter. NPR introduced and tested different features, formats and shows over the years - an "alt.NPR" brand for our original podcasts and a build-your-own-podcast tool powered by our API (check out the timeline to see more). Not all of them have lasted through the decade, but we certainly learned from each.

Learning how to track engagement with this new vehicle for our content wasn't simple either. Moffett recalls:

No one really knew what to expect in terms of downloads. There was a lot of confusion over exactly what a download was, or how we would track people. All of it was new, and podcasts can't be measured as easily as web page traffic.

We actually came up with a novel way to try and put anonymous unique identifiers in the subscription URLs to at least understand how many people were subscribed. It worked pretty well for a few weeks until we realized it broke about 1/4 of the podcast clients out there, so we quickly stopped that.

I remember making a bet with someone that it would take us three months to get to 1 million downloads, but that goal was eclipsed in no time.

NPR podcast were downloaded that many times in the second month.

The podcast landscape has expanded in profound ways since then – both technologically and socially. A podcast app is now native in Apple's iOS8, a change the company made in 2014, and certain podcast-based programs have permeated pop culture – This American Life and Serial, NPR's Invisibilia and TED Radio Hour, now one of the most downloaded podcasts in the English language (13 million+ downloads in July 2015).

The changes of the last decade go beyond the simple number of people who've made podcasts part of their media diet, too.

Programs created for podcasting are no longer bound by the platform where they began. Fans and listeners interact with hosts on social media and at live events - tapings for shows such as Wait Wait... Don't Tell Me! and Microphone Check. New audio festivals have emerged in the wake of a growing fascination with podcasts. Radio Love Fest and Cast Party are two our own hosts have participated in this year.

Podcasts have a regular presence on NPR's broadcast shows, too – Alt.Latino on Weekend Edition, Hidden Brain on Morning Edition – and those programs can also be found at NPR One, NPR.org, Stitcher, iTunes and in many other places.

Great programs are added to the collective bank of podcasts each day from NPR and others media companies - both public and commercial. We're excited to share this space with so many talented thinkers, journalists and storytellers - some of whom started right here at NPR - and the growing community of people who appreciate the power of sound in our lives. 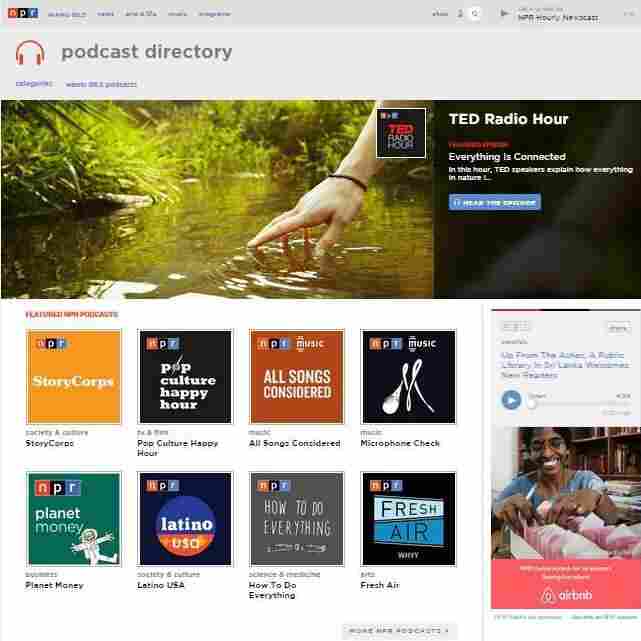 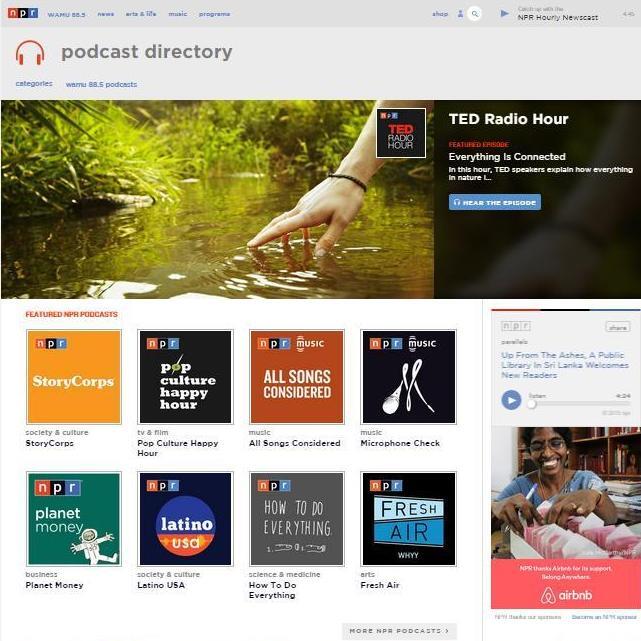 Anniversaries, birthdays and events in the celebratory category call for a treat, no? While our digital innovation isn't quite to the point where we can send you a slice of "Happy 10 Years In Podcasting, NPR" cookie cake Willy Wonka-style, we did think of another way to celebrate with you – a playlist of must-hear episodes from the people who make them.

Current NPR podcast hosts and producers selected one episode of their show that they want you to hear. An audio party favor, if you will.

Enjoy the listening. We hope it inspires a smile or helps you understand your world a little better. You certainly do that for us.

Ask Me Another Host Ophira Eisenberg

From The Top Host Christopher O'Riley

How To Do Everything Host Ian Chillag

How To Do Everything Host Michael Danforth

This post has been updated. A previous version incorrectly listed iOS7 as the first Apple operating system with a native Podcast app. That update was part of the iOS8 release.