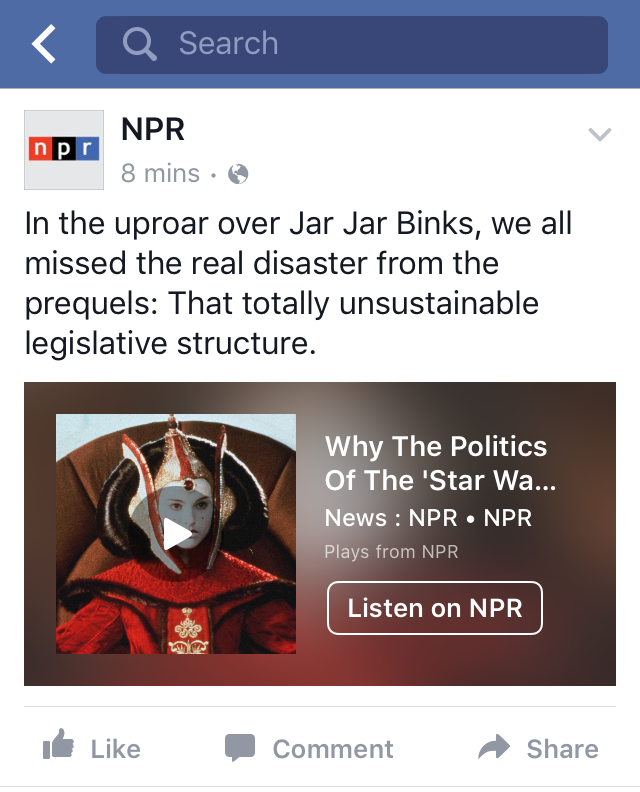 As listenership for digital audio increases globally, NPR's experiment will be the deepest audio integration yet between public radio and social media platforms.

For the first time, many Facebook users will be able to play NPR audio clips in their Facebook News Feed. In turn, this listening will contribute to public radio's next social steps.

An experiment built for sharing

After a brief preview on Facebook in December, NPR will begin the experiment in early January and publish several audio clips to Facebook every day for 30 days.

The audio clips will be available to the audiences Facebook has designated for the experiment: mobile users of Facebook's iOS app and desktop users of Facebook.com. Users of the iOS app may need to upgrade to the latest version, 46.0, before seeing the new feature.

The Facebook clips, which NPR editors will choose, will capture different audio moments from NPR's programs and podcasts, including select stories from NPR member stations that air on Morning Edition and All Things Considered. On each clip, listeners will have a "Listen on NPR" button to hear the entire segment or podcast episode on NPR.org.

The first clip in the experimental player is from the latest episode of the NPR Politics Podcast — a discussion of what we can learn from the baffling politics of the Star Wars universe. Facebook users can hear the clip here. On NPR.org, the full length audio is here, along with a text story. 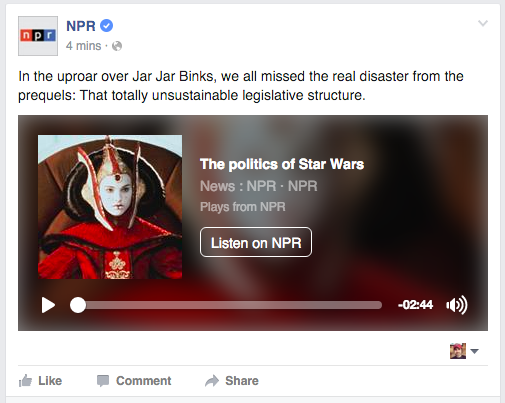 During the experiment, NPR's newsroom training unit and analytics team will track the performance of the audio posts. After the experiment concludes, NPR will share detailed results, analysis and recommendations with NPR member stations and partner programs.

In pursuit of industry answers

Leaders in public radio and the audio industry at large see social success as critical for the future of spoken-word audio.

The obstacles to social audio's success are numerous, but NPR and member stations have collaborated on two major experiments and resulting reports: "What can make audio go viral? NPR experiments with building earworms for social media" and "From explainers to sounds that make you go 'Whoa!': The 4 types of audio that people share."

Other social-audio experiments at NPR member stations have included WNYC's tests of Twitter audio and podcasts-as-videos on Facebook and Nashville Public Radio and others distributing on SoundCloud.

NPR and Facebook have discussed the possibility of News Feed audio for several years. Discussions intensified this year after the launch of NPR's embeddable player and its more than 800,000 pieces of audio.

Over the summer, Facebook began building a "Music Story" player in conjunction with several music services and identified its potential value to NPR, as a long-time Facebook publisher and a representative of public radio.

With this player, NPR decided to pursue an experiment that would benefit greater public radio and connect new audiences with different pieces of audio journalism and storytelling.