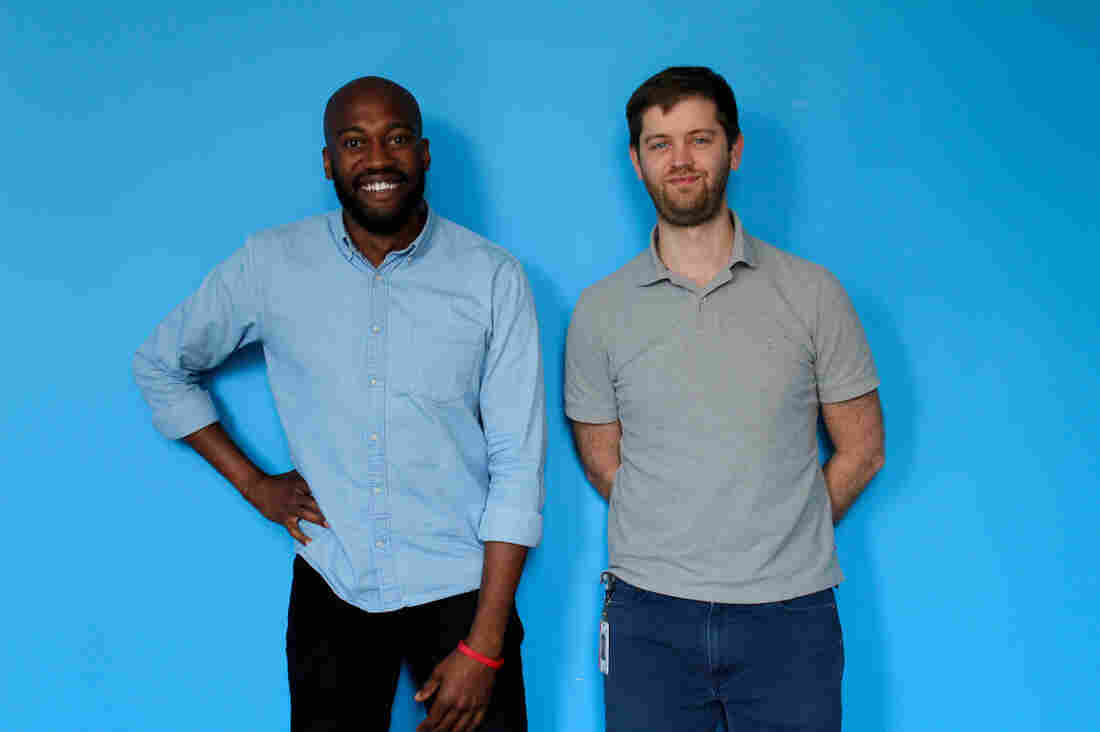 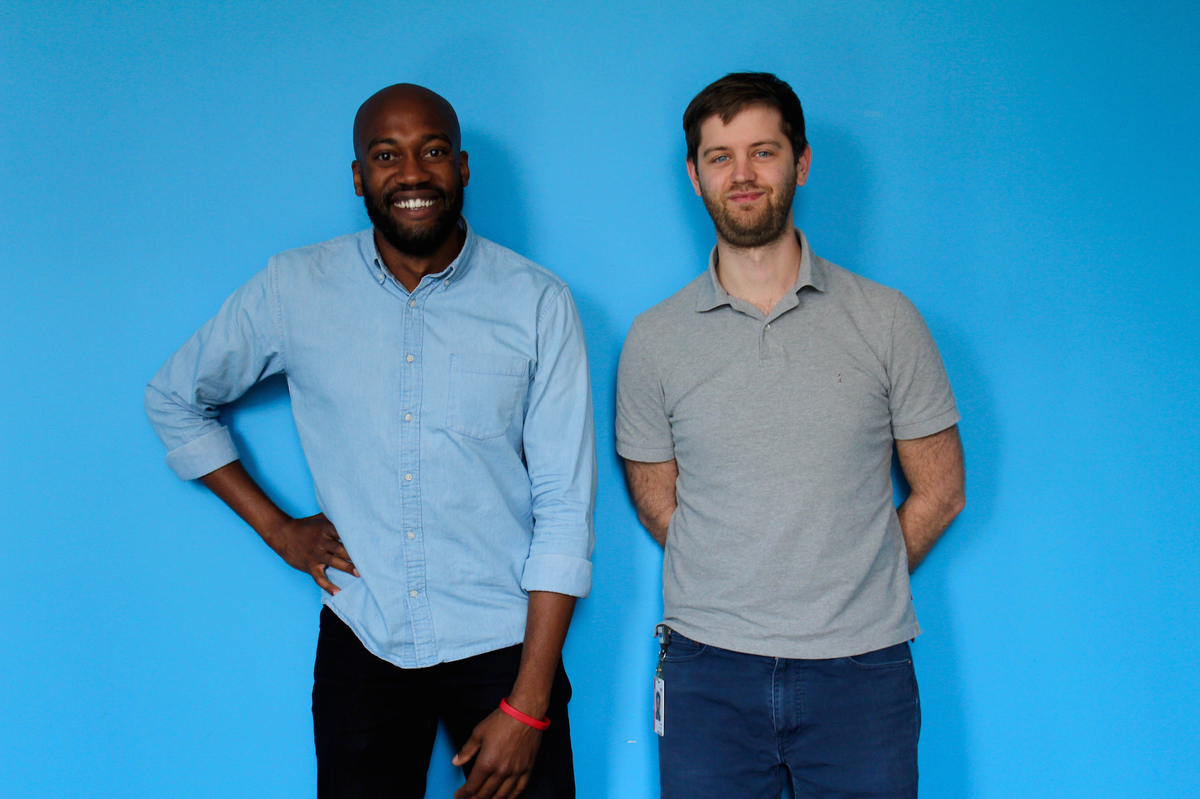 Sam Sanders (left) is the host of NPR's new podcast, It's Been a Minute with Sam Sanders, and Brent Baughman (right) is the producer.

You may already know Sam Sanders as a campaign reporter for NPR during the 2016 presidential election, as well as one of the original co-hosts of the NPR Politics Podcast. Sam's trademark curiosity and empathy made him a fan favorite as he covered the intersection of culture, pop culture, and politics, and talked listeners through all of the political coverage that swirled throughout the election cycle.

Sam recently teamed up with producer Brent Baughman (who also produces the NPR Politics Podcast) to create a new NPR show: It's Been a Minute with Sam Sanders. The podcast will feature two episodes each week. On Tuesdays, it will be "deep dive" interviews with celebrities or newsmakers, or discussion on a single, newsworthy topic. And on Fridays, episodes will wrap the week's news with a panel of experts and guests. The trailer is now available, and the first episode will drop on Friday, June 23.

In a Q&A with Sam and Brent, we talked about what listeners can expect from the new show. But we also heard a little bit about socks, listener feedback, and best moments from their weeks. 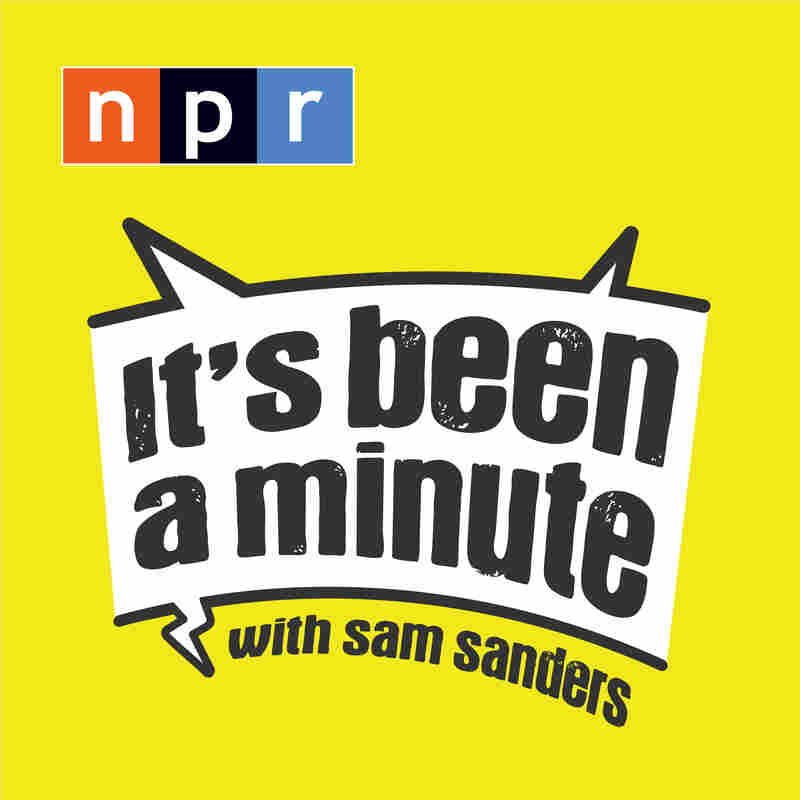 How did the idea for this podcast get started?

Sam: It was definitely Brent's idea. I'm not sure when it first came to him, but I remember when he first told me. Was out for pizza and beer with him and a few other friends, and while I was venting about something work and/or presidential campaign related, he suggested that when I left the Washington desk we could do a show together. I kinda blew it off, if I recall correctly; something like, "Sure, whatever," with a strong eye roll. I didn't know how serious he was. Honestly took a few months for me to get it!

Brent: There's a tradition of great talk shows at NPR with roots in the conversations we all have at our desks. It's All Politics, Pop Culture Happy Hour, the current NPR Politics Podcast. I also think listeners are drawn to Car Talk more for the talk than the cars. Anyway, Sam has a talent for conversation and already does it with so many talented talkers in the building.

Who's your dream interviewee for the show?

Sam: Kate McKinnon from Saturday Night Live. I've actually been trying to book her since the 2016 campaign. What she's doing sits right at the nexus of entertainment, popular culture, and politics, which is what we're trying to get at in the show.

(Kate McKinnon, if you're reading this, Sam wants to talk to you.)

Sam, you famously walk around NPR headquarters without shoes on, and you're always wearing fun socks. What's your favorite pair? 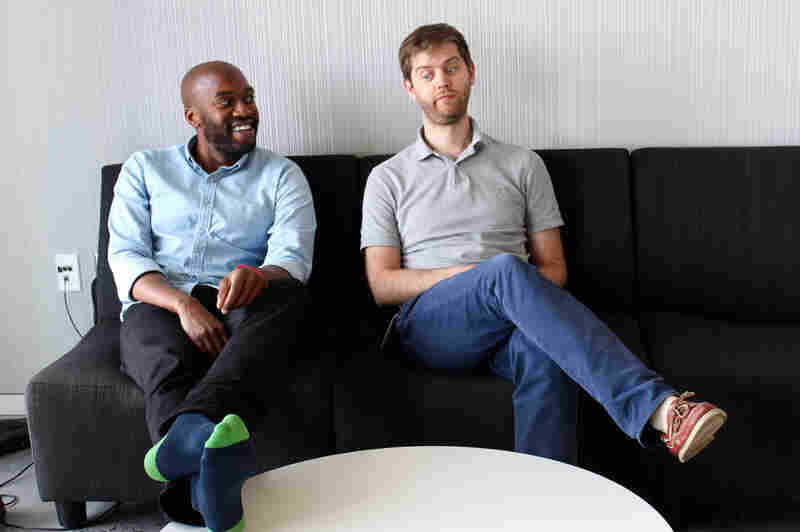 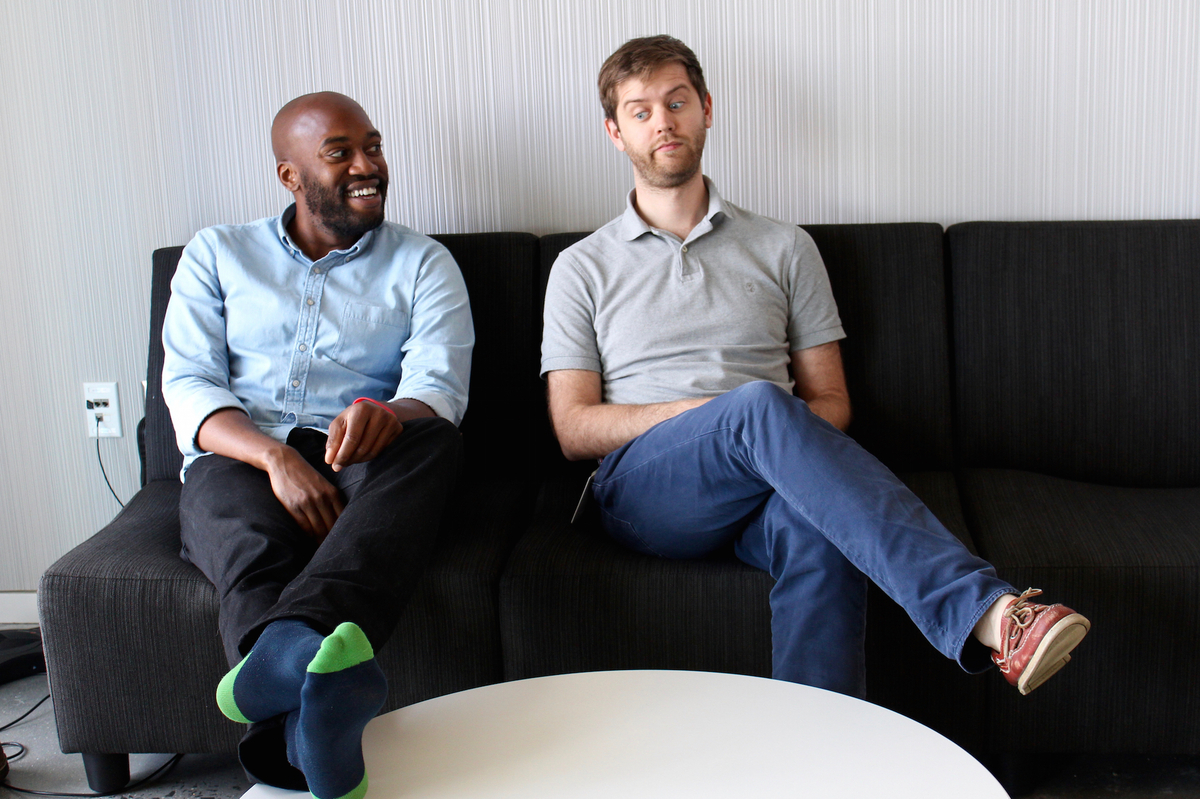 Sam: People have started giving me socks now that they see me shoeless so much. Gotta say the pair of NPR socks gifted to me by Mike Oreskes and the red, white, and blue starred socks Brent got me are two faves. I also have a pair with lots of surfing dogs on them. Love those too.

You guys asked for a lot of feedback from listeners as you were refining the focus of the podcast. What did you learn in the process?

Sam: That our listeners have really good ears. The specificity of their feedback and the crystal-clear way they let us know what worked and what didn't was amazing. Got an email last week with a pretty detailed tip on when to post some music to accompany the introduction of a new segment. I was like, "They should work here!"

Brent: Sometimes when you're working on something so intensely it's hard to be objective about it. We got a lot of good feedback about what wasn't working. But also what was. We heard over and over that listeners love the diversity of topics, the mix of high and low brow, the positive energy. It helped steady our compass.

(Sam and Brent exclusively piloted and tested things in the NPR One app starting in February, and listeners submitted survey feedback throughout that entire process.)

Brent: You are a lucky producer if your tape is entertaining enough that you laugh or smile while you're cutting it—when you've already heard it at least once before. That happens all the time with Sam, because he is so good at locking people into the moment and engaging in a joyful way. The first interview we'll run with Lena Waithe from Master of None is full of so much laughter and spontaneous energy that came from Sam just being perfectly present, and Lena responded in kind.

Sam: Brent is drama free. I usually am not. Whatever emotion I am feeling at the moment, I'm giving it 150%. I kinda think of the two of us as an Obama/Biden duo. Brent's the Obama—even-keeled, ever professional, contained, and thoughtful. I'm the Biden—kinda loud, always talking, always moving, sometimes an unpredictable and loose cannon, occasionally chasing the random squirrel. 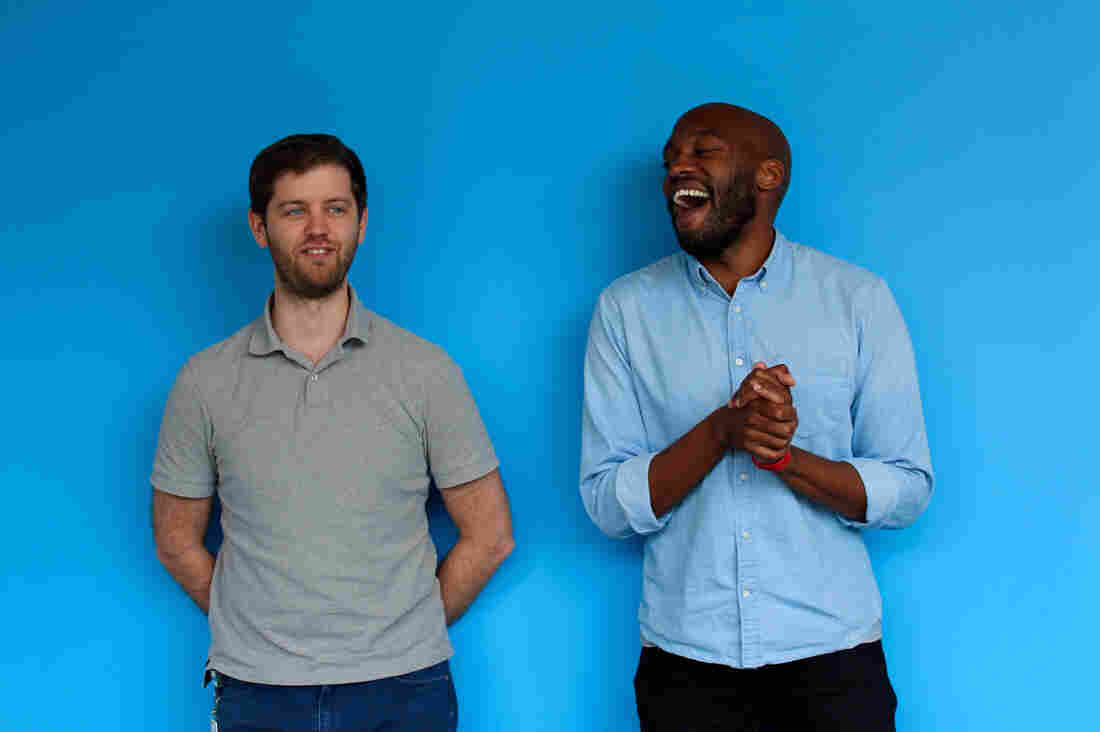 Sam, you're used to interviewing people all the time. But what's a question that you wish you could be asked in an interview?

Sam: What song is stuck in my head at the moment. There's always at least one there. And I always have a story to tell about each one.

Brent: Aww, thanks for asking. I planned a trip for my girlfriend and me to Mexico for her birthday in September. So the plan is to work really hard all summer on the new show and earn that whole week off.

Sam: Kasia Podbielski of NPR's Training team made strawberry and rhubarb pie and brought it to work. It was perfect.

For those who haven't heard any episodes yet, what would you say to convince them to listen?

Brent: If you are simultaneously exhausted by the news but can't seem to focus on anything else, this will help. It's about the news. But it's not the news. And it's fun to listen to.

Sam: We will always surprise you. And we'll never be afraid to laugh at ourselves. 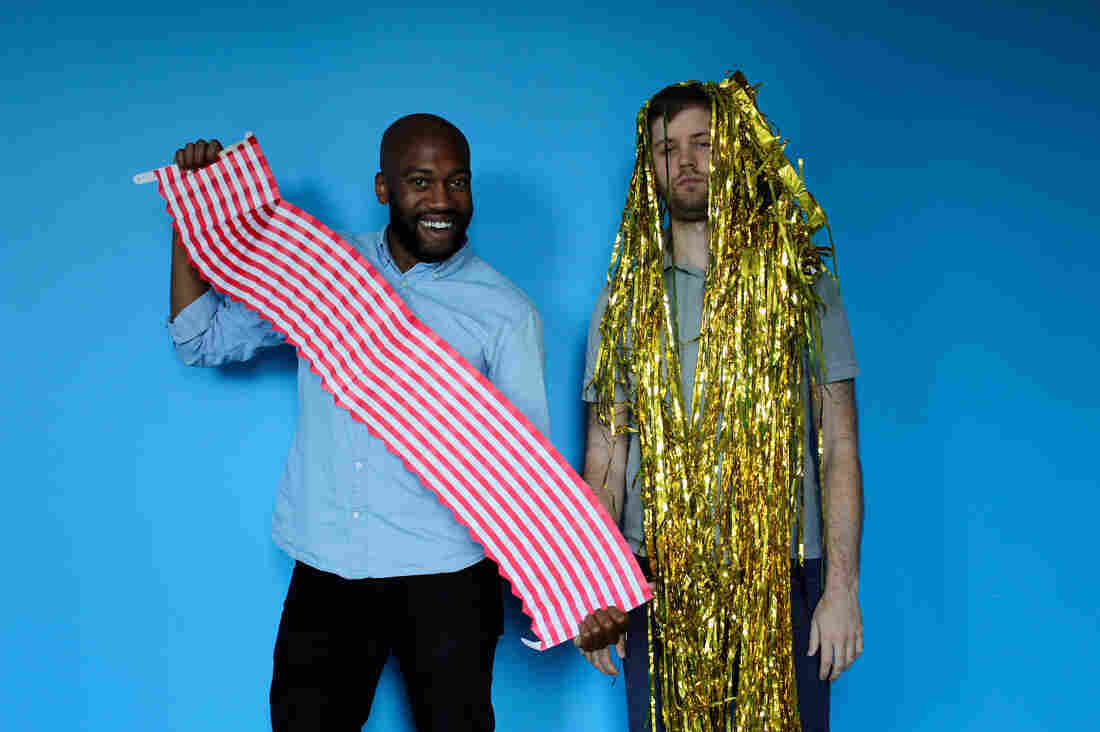