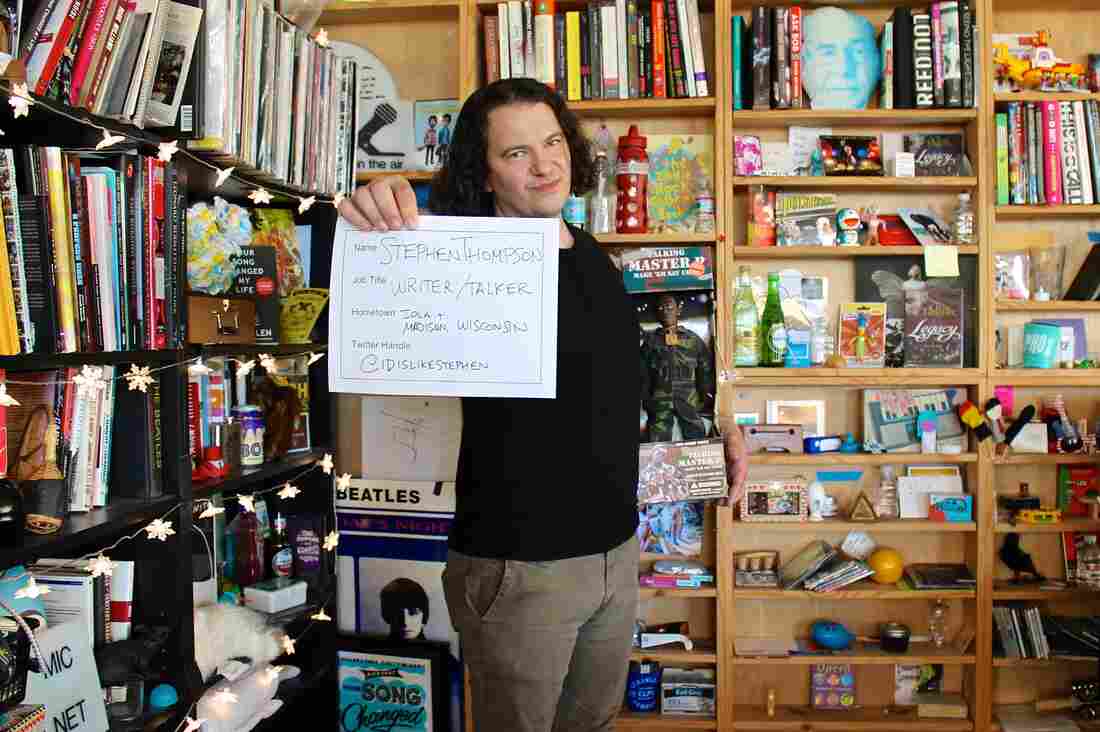 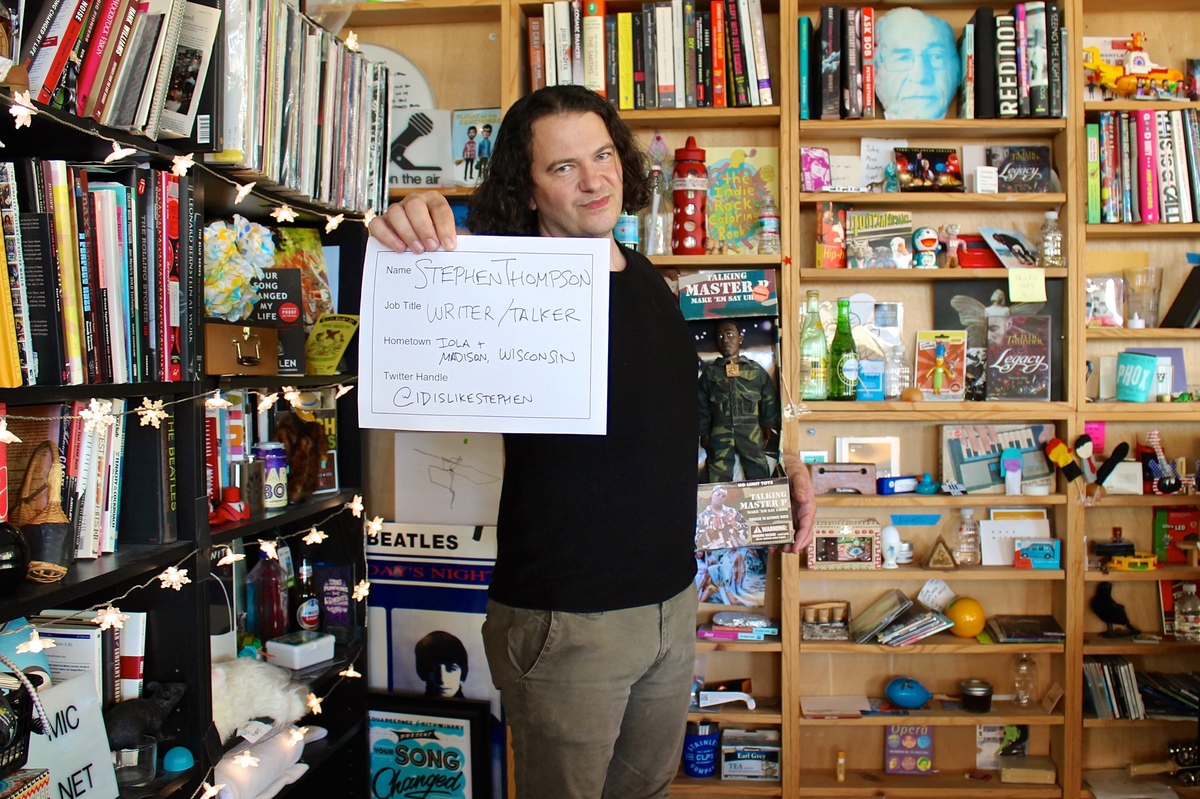 Faces Of NPR is a weekly feature that showcases the people behind NPR, from the voices you hear every day on the radio to the ones who work outside of the recording studio. You'll find out about what they do and what inspires them. This week's post features NPR Music's Stephen Thompson.

Where You're From: Iola + Madison, Wisconsin

You're a producer for NPR Music and a panelist on Pop Culture Happy Hour. What does that mean?

Being listed as a "Producer I" means that many of NPR's job classifications make little logical sense. I'm not a producer, opting instead to write about music and pop culture and pop up on newsmagazines and podcasts as often as they'll have me. As for being a panelist on Pop Culture Happy Hour each week, it means I get paid to to have fun, thoughtful conversations with some of my dearest friends, which is a pretty sweet gig any way you slice it. Beats workin' in the mines. 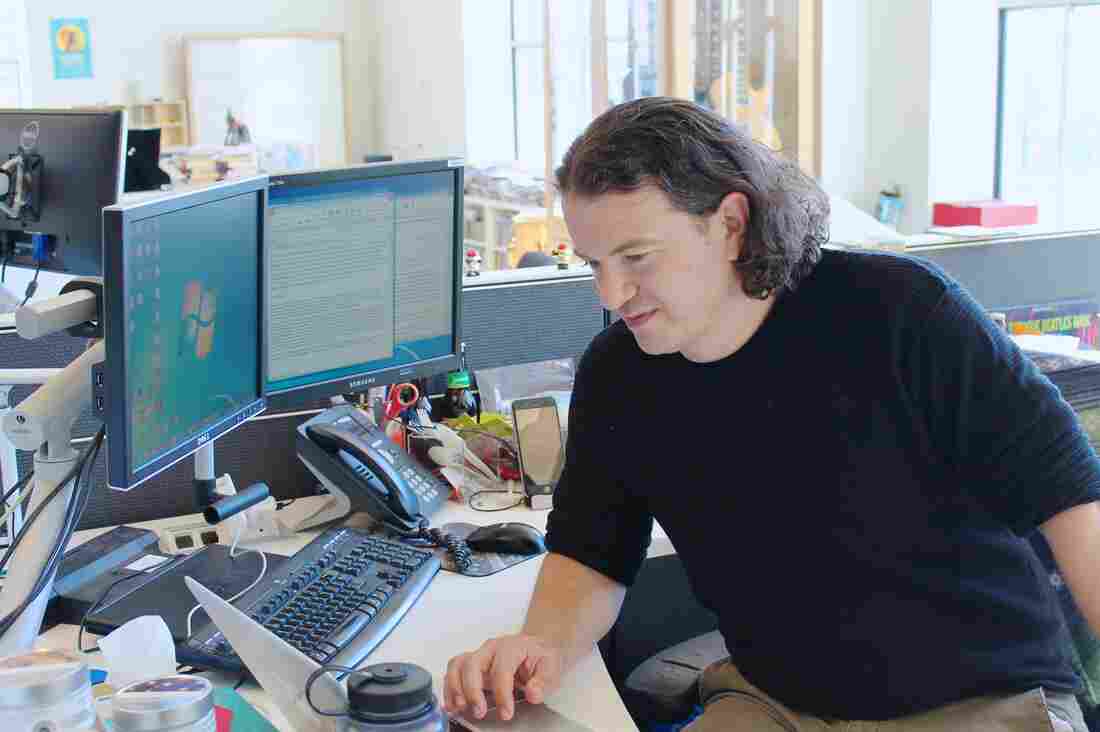 Someone who wants my job is free to pry it out of my cold, dead hands, but I encourage aspiring music/culture writers and podcasters to write and/or podcast as much as humanly possible, wherever possible — if no one asks you to write/talk, don't wait for them to do so; create your own outlet, even if it's something as low-profile as a Wordpress page or a podcast you make with your best friend. That's basically what Linda Holmes and I did when we came up with Pop Culture Happy Hour. We recorded a pilot on our own time when no one was paying attention.

As for my start at NPR in the spring of 2006, I'd worked at The Onion for 12 years, during which time I founded, developed, and hired/managed the staff of their entertainment section/website, The A.V. Club. I like to think of The Onion and NPR as the twin towers of journalism in America, so I'm proud to have sunk more than a decade of my life into each. 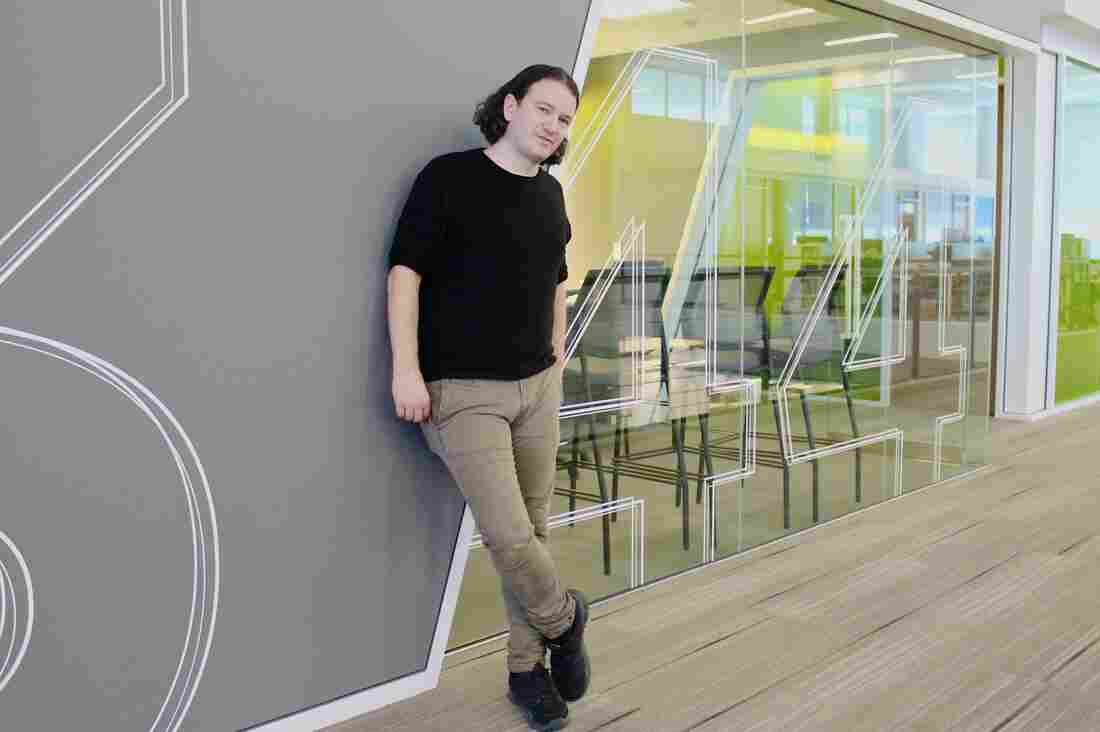 What are some cool things you've worked on?

I'm proud of Pop Culture Happy Hour to an unseemly degree, and I still feel smug about suggesting to Bob Boilen that we ought to have a singer perform at his desk back in 2008. (Bob did most of the actual work, but I've been eating lunch off that idea ever since.) The whole NPR Music project has basically been one long cool thing I've worked on, and all that Onion and A.V. Club stuff was pretty cool, too. Let's see, what else? My kids are cool enough to view me as a gigantic goober, and I've been working on them for ages, so I'm gonna count them, as well.

It would have to be attending a White House Rose Garden ceremony while posing as Ari Shapiro's trusty intern. As a huge fan of the Green Bay Packers, I'd desperately wanted to watch the team visit the White House and rub their 2011 Super Bowl victory in the face of a certain high-profile Chicago Bears fan. So I tagged along with Ari, whose knowledge of football consisted of a vague recollection that it was most likely the sport the Packers play. So I filled him in on the basics, while he filled me in on the basics of White House etiquette: whether body paint counts as a shirt, whether to shriek "The Bears Still Suck!" at Barack Obama, that sort of thing. 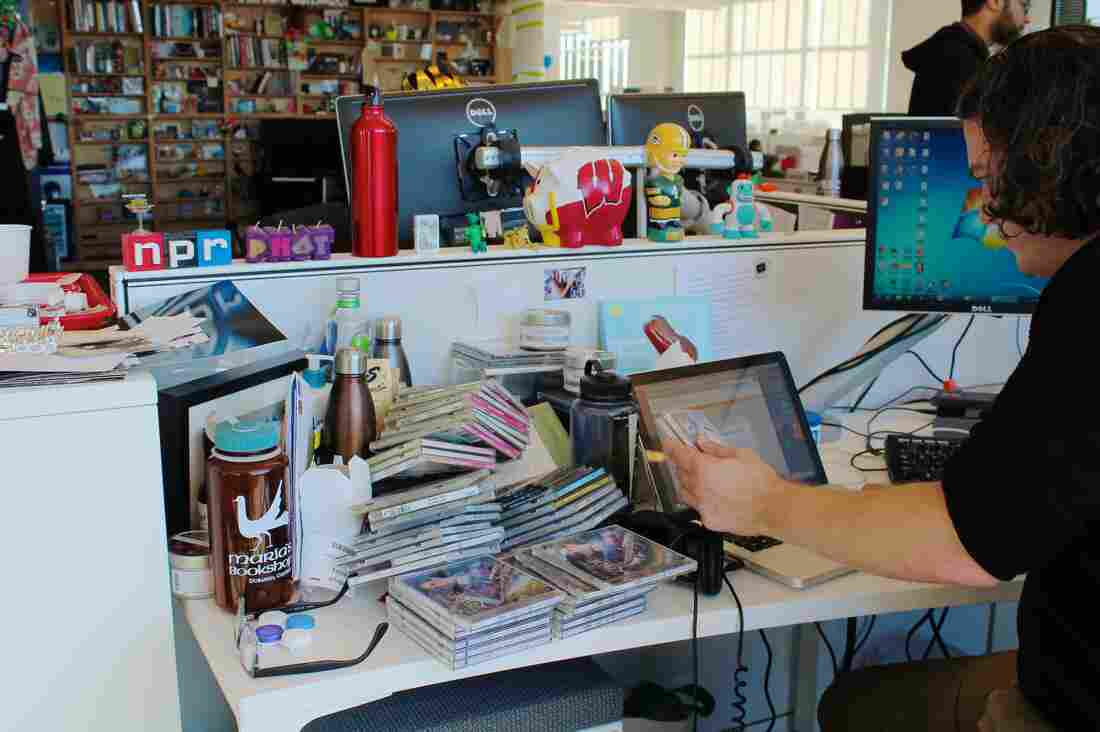 Several dozen copies each of albums by Zade and Bucky Covington, a jar of sunflower seeds, a keyboard choked with sunflower-seed husks and human hair, a dozen or so Yanni CDs that Bob Boilen hides around my cubicle the moment I step away from my desk, and 15 or 20 filthy utensils.

Most recent favorite would have to be Chance The Rapper, though producing two Hanson Tiny Desks in one day was a thrill — that's one of my favorite Tiny Desk experiences, for sure. The Avett Brothers and Adele were big ones for me, too. But I should be diplomatic and call it a 657-way tie.

What emoji best represents you?

Is there an emoji in which a flag-draped unicorn rides a Harley-Davidson off a ramp shaped like an eagle's wing en route to an Evel Knievel-style leap over a flaming gorge? If not, then let's say: N/A. 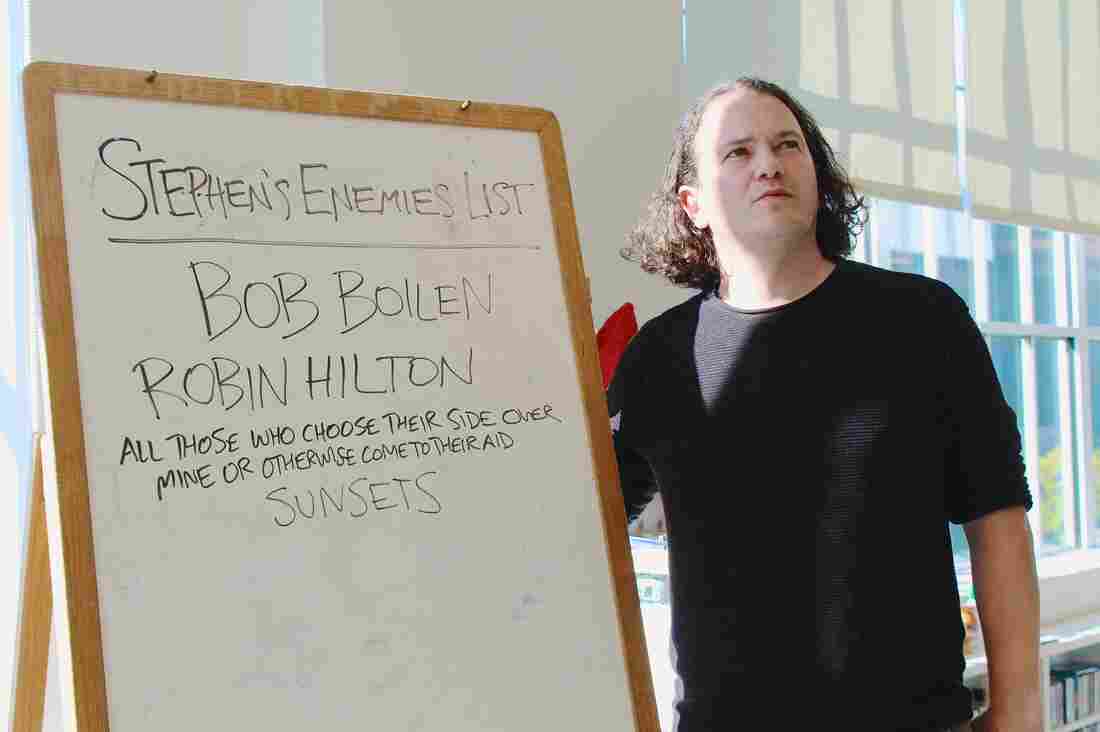 "'Nice Guys Finish Last' is delusional propaganda, embraced by an unseemly coalition of the not-nice and people who finish last." Kinda long for a motto, but it's the first life lesson that popped into my head.

What is a question you wish you could be asked? Also, give us your answer.

"Mr. Thompson, what do you intend to purchase with your world-record lottery winnings?" (Answer: "35 of the 57 remaining Fabergé eggs.")

I'm absolutely in love with how little input I receive from advertisers/sponsors — seriously, I don't think we stop often enough to bask in that independence. I love how much of what I do gets to be driven by enthusiasm, and I love the audience so much. I've done a zillion Pop Culture Happy Hour functions in the last seven years, and I've never met a listener I didn't like. 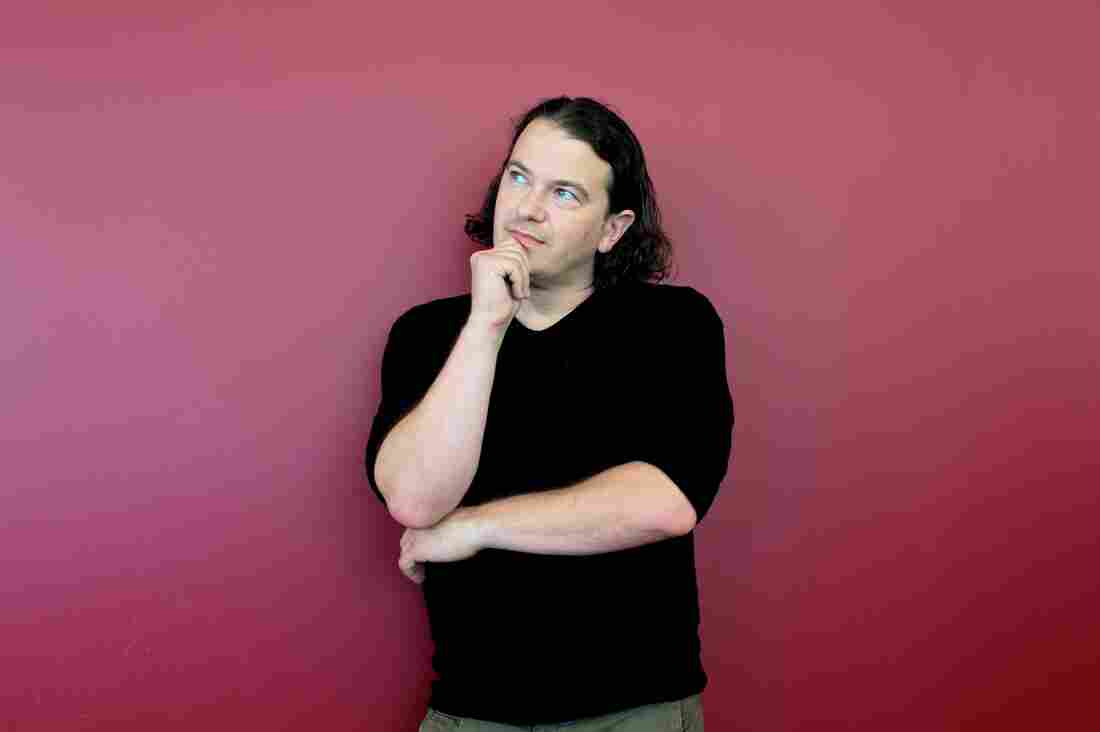 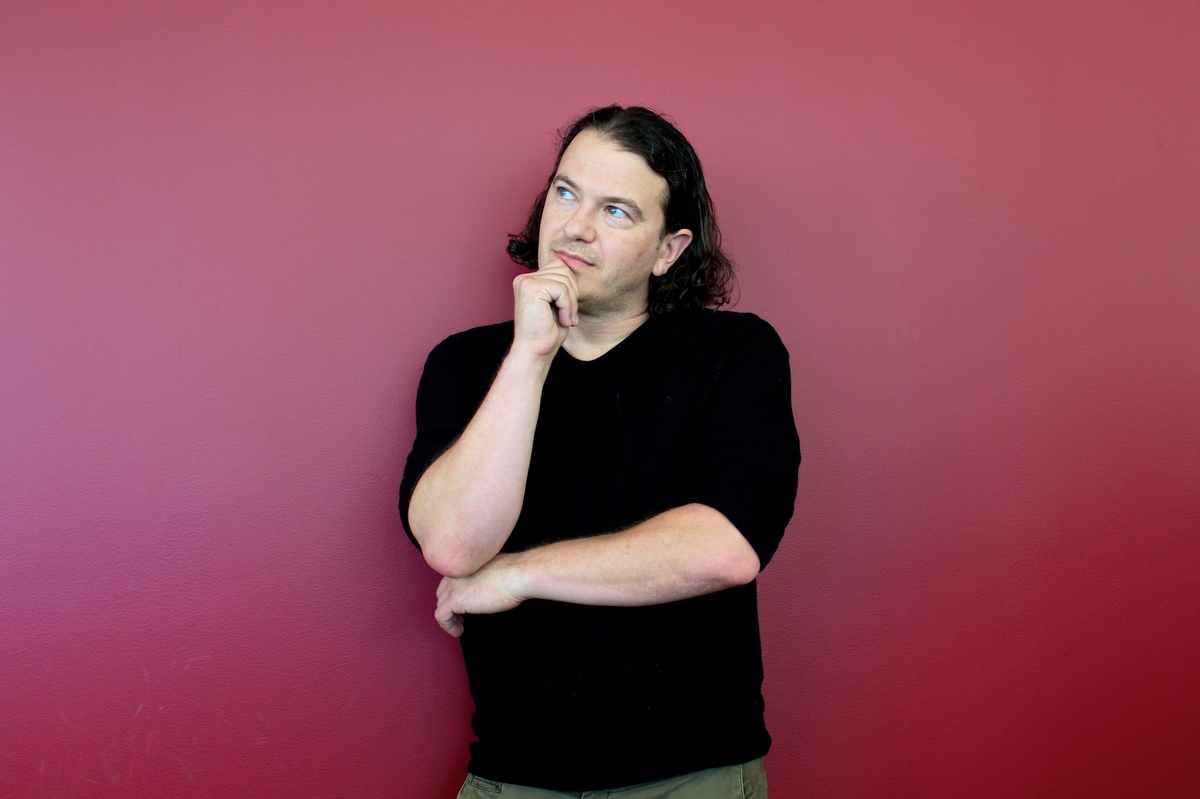