Behind the Stories features perspectives from the reporters, editors, and producers who create NPR's content, offering insights into how and why they do what they do. For this post, we heard from NPR Special Correspondent Melissa Block, who covered the 2018 Winter Olympic Games. 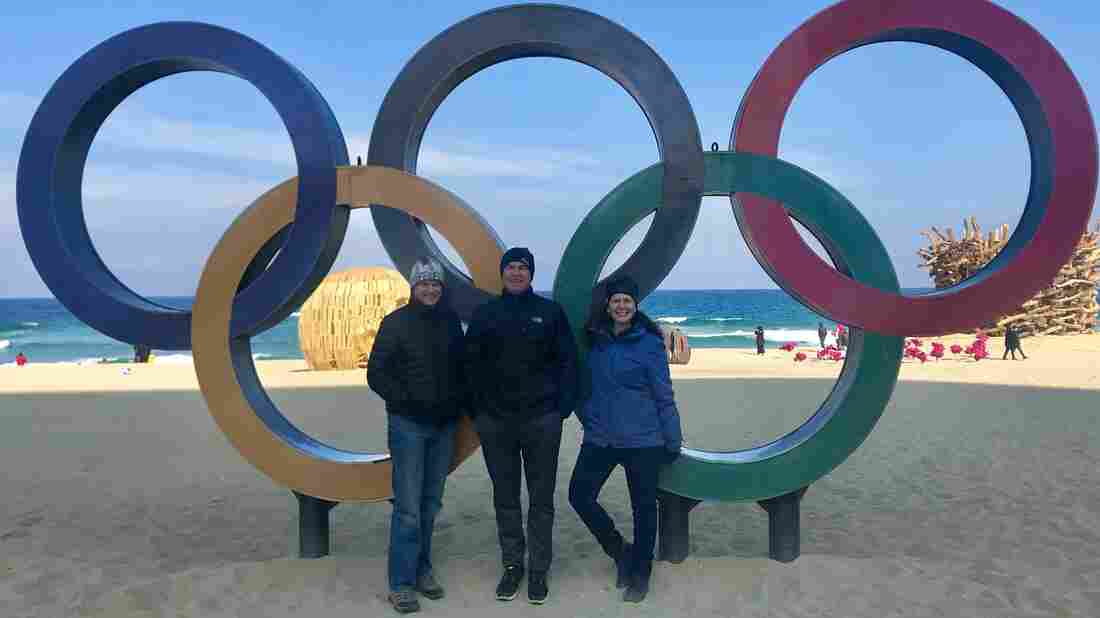 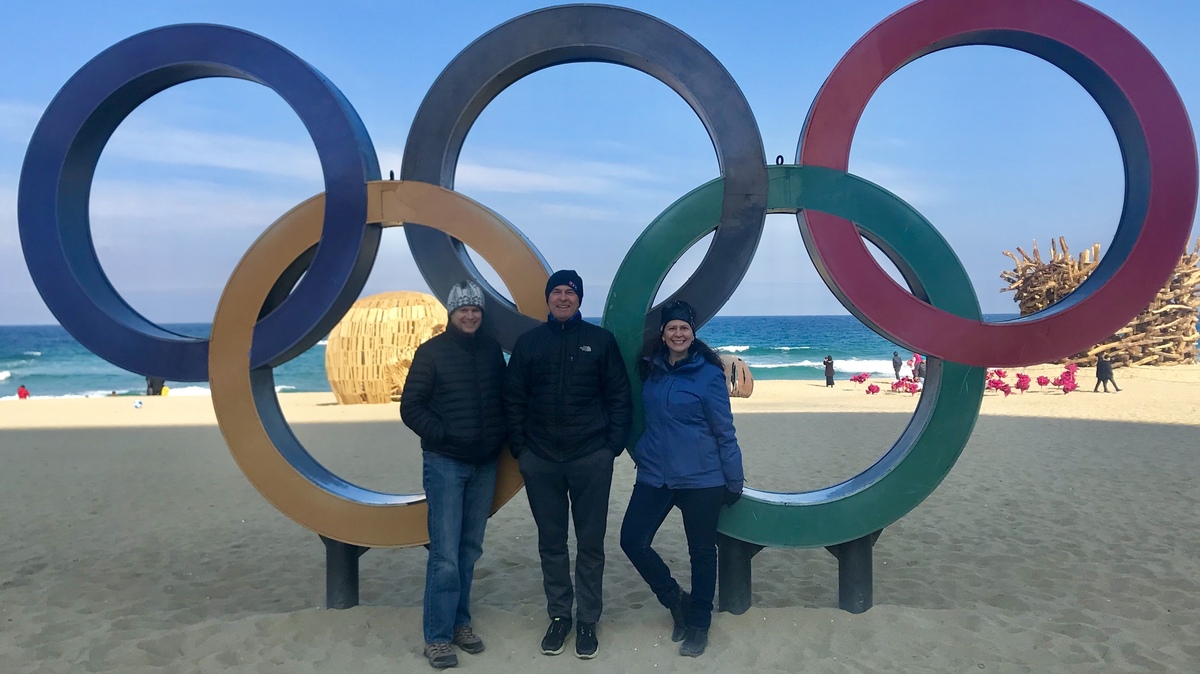 Welcome back from Pyeongchang! Any jet lag?

Yes! It's vicious! Just when I think I've overcome it, I hit the wall. It's much worse coming back this way than it was heading over to Korea. Luckily, now I can nap.

We know this isn't your first time covering the Olympics. What was unique about your approach in covering these winter games?

Layers! Lots and lots of layers. I basically wore at least two of everything at once, to combat the intense cold and wind: two pairs of socks, two pairs of gloves, two sets of long johns, two hats. I think my record was six layers of shirts/vest/jacket. I could move, but barely. (And I was still cold.)

@NPRmelissablock prepping for the Opening Ceremony with the most important gear! @pyeongchang2018 pic.twitter.com/o9yIg0ZDGO

What sort of planning goes into covering an event this big?

We had to apply for credentials back in August. I started planning stories last September, when I went to a pre-Olympics media summit in Park City, Utah. I took several reporting trips in the months leading up to the Games to profile athletes and sports I was most interested in (biathlon, bobsled, skeleton, aerials skiing.) There were also all sorts of logistics for our team to coordinate: housing, travel, and audio gear.

Since our team was so small (consider: we had a grand total of five people there; the New York Times had... wait for it... 34!), we had to be selective about what we could and couldn't do. The Winter Olympics are much smaller than the summer games, but the venues are spread out over many miles. You simply can't cover it all, so you just try to be at the right place at the right time.

What was everyone's role on the team? 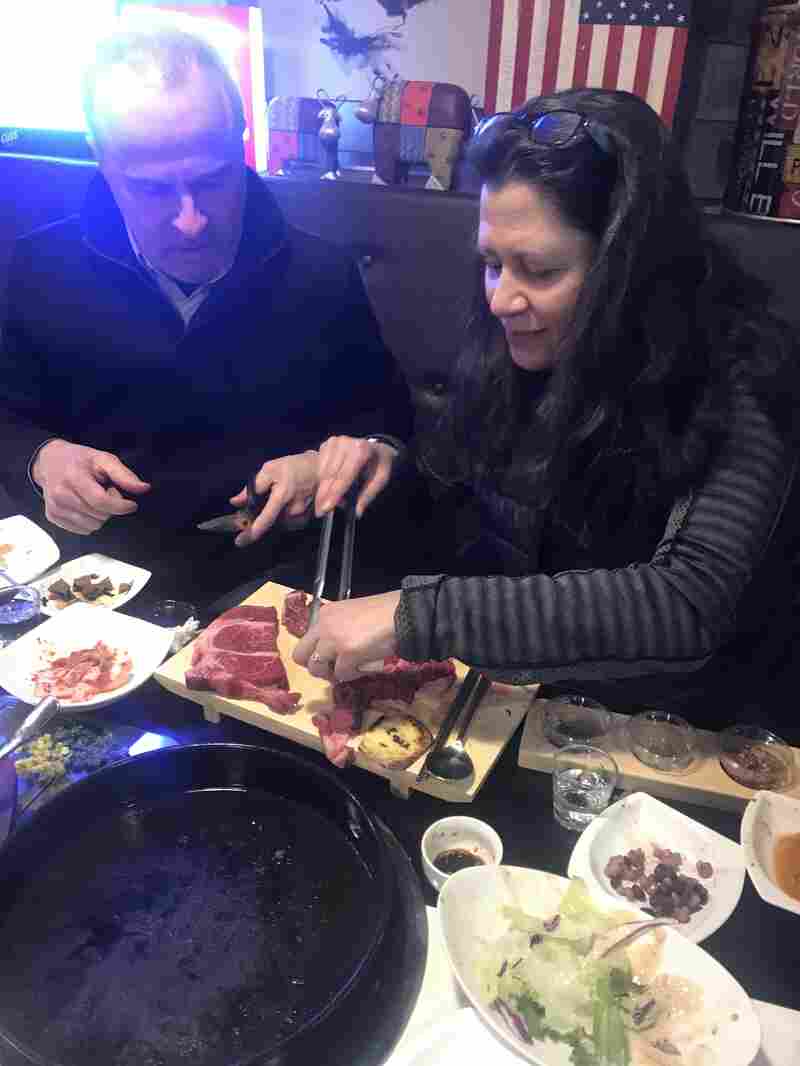 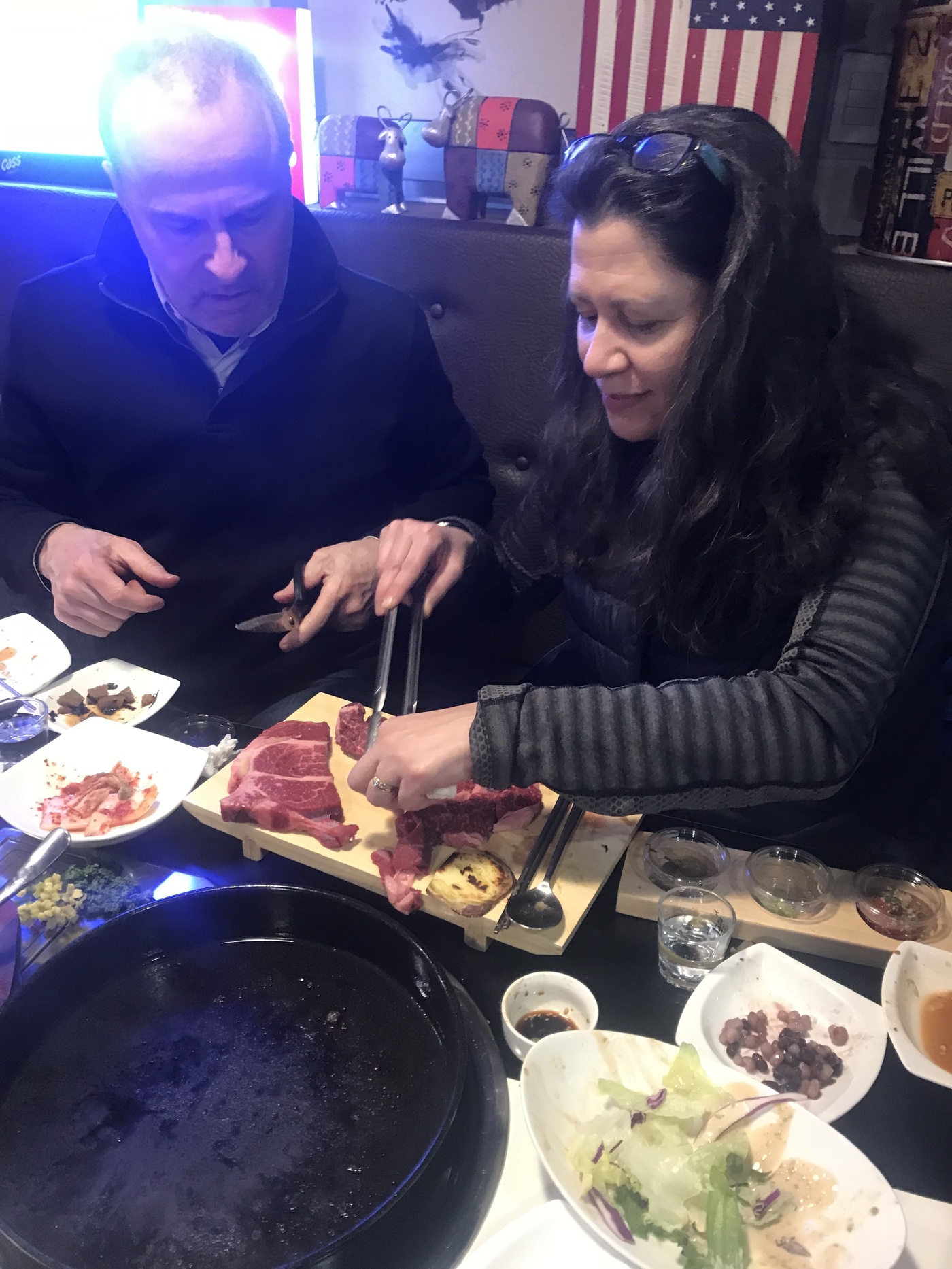 Tom Goldman (NPR sports correspondent) and I were the two main reporters covering the Olympic sporting events for our radio programs. Bill Chappell did the same on the digital side for npr.org. Elise Hu, who is based in Seoul, focused largely on North-South Korean relations and the geopolitical implications of the Games. Russell Lewis, our fearless editor, coordinated all of our coverage, set up our makeshift Olympic "bureau," offered unflagging moral support, and much more.

Most importantly, I appointed myself the chief #TeamNPR scout for the best places to grab a quick dinner of Korean BBQ. It's a very important job.

We saw a few photos of you using blankets and coats to cover yourself when recording audio. Tell us a little more about the challenges of making audio stories outside of the studio.

Right! Our workspace at the media center in Pyeongchang turned out to be super noisy. We were situated right beneath two air duct blowers that sounded pretty much like jet engines. The fuzzy Olympic mascot blanket (isn't it sweet?) and my parka were an attempt to create a bit of soundproofing while my colleague Tom Goldman recorded his narration for his stories. When NPR reporters are filing on the road, we often will pile up blankets and pillows to create a less echoey space for voice tracking.

Honestly, it was so noisy in the workspace that I ended up not working there at all; I wrote and filed from my nice quiet room, where I also had an electric kettle and could make myself endless cups of tea. 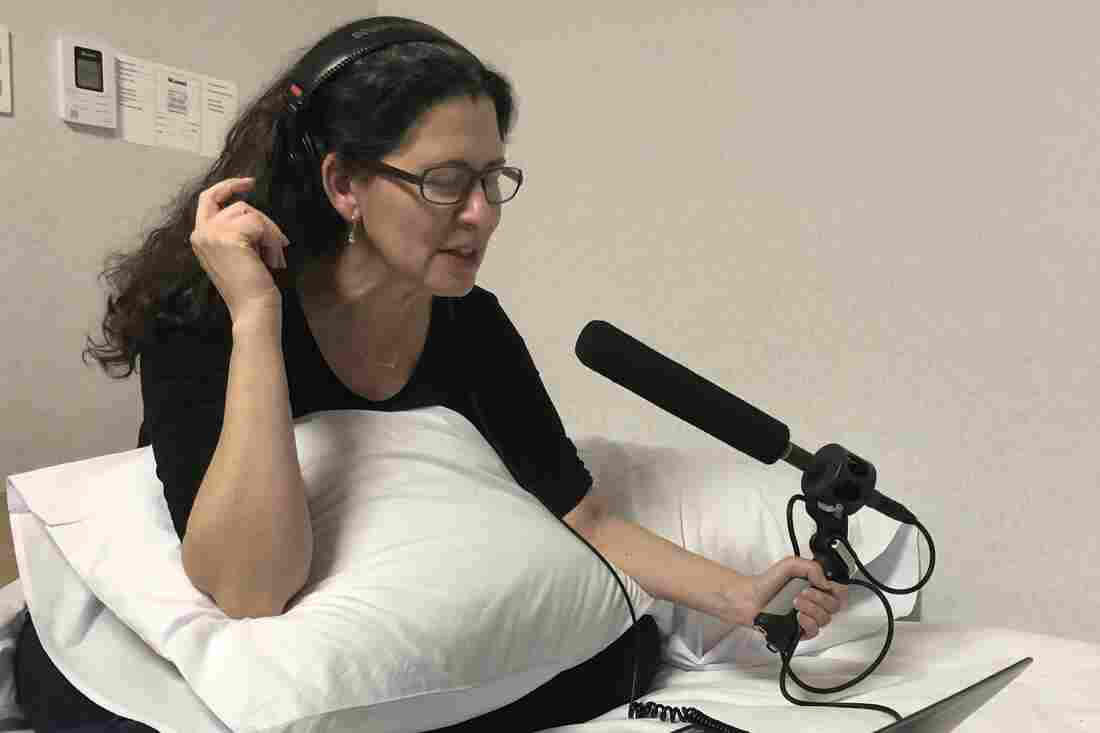 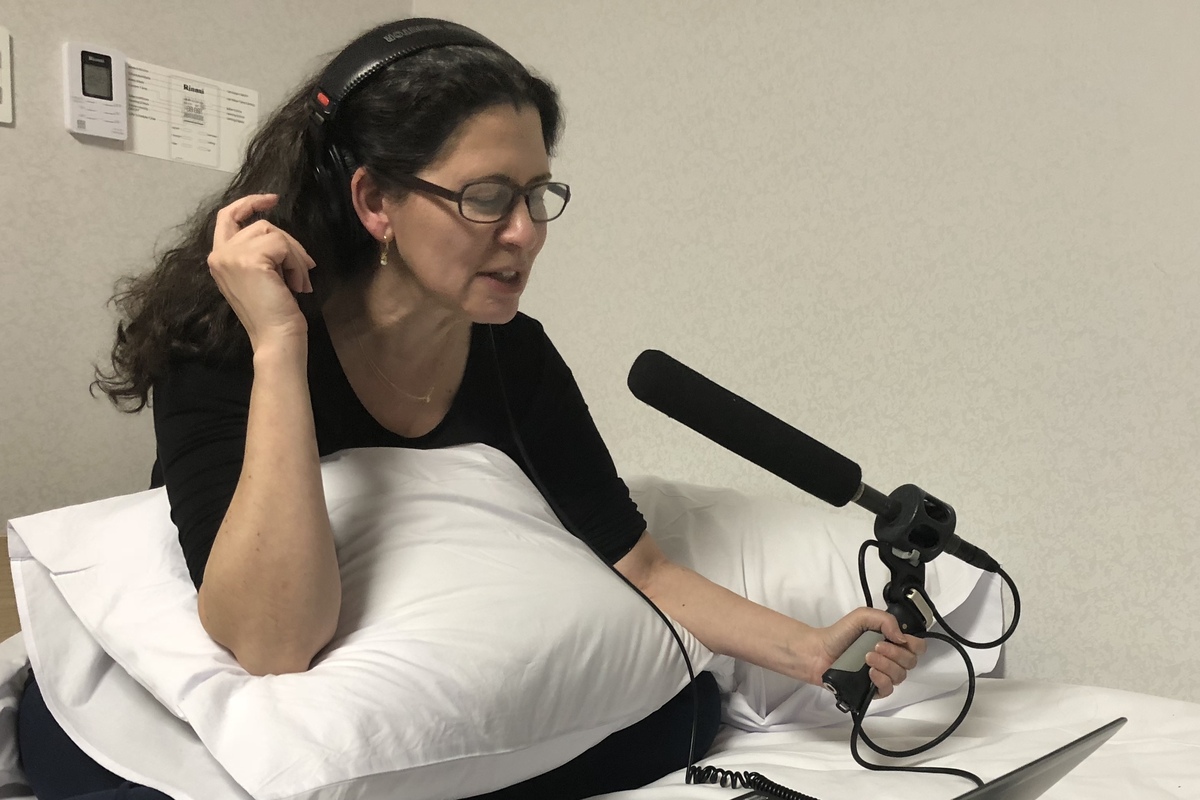 How do you think NPR's coverage differed from other media outlets?

I think one of the hidden benefits of being such a small team is that, by necessity, we shed the notion of comprehensively covering every event. What that frees us up to do is follow our passions and curiosity. For me, that led to a profile of an Olympian mom watching her Olympian daughter compete in biathlon, a primer on Olympic sports lingo and a story about the men in charge of making ice at the various venues.

We thought the "Ice Meisters" piece was particularly NPR. What inspired you to write it?

I'm always fascinated by people who are obsessed with what they do, especially when it's a craft the rest of us might not understand or pay attention to — like ice-making.

Here's my favorite thing that didn't make it into the story: I asked one of them, Mark Messer, if he's always paying close attention to ice, like even when he drops ice cubes into a glass. And he said absolutely! He said he's always looking at how the bubbles are formed, and in studying the ice, he can figure out whether the cube froze from the bottom or the top. I love that.

Adam Rippon said he listens to NPR to get pumped before a workout. Did you get a chance to meet him?

If by "meet him" you mean be part of a throng of cranky reporters clustered in a tight pen in what's known as the mixed zone, waiting for the athletes to appear after they compete, then yes, I did meet Adam Rippon, twice. Here's photographic proof (that's my hand in the blue jacket, holding my Marantz 620 recorder.) 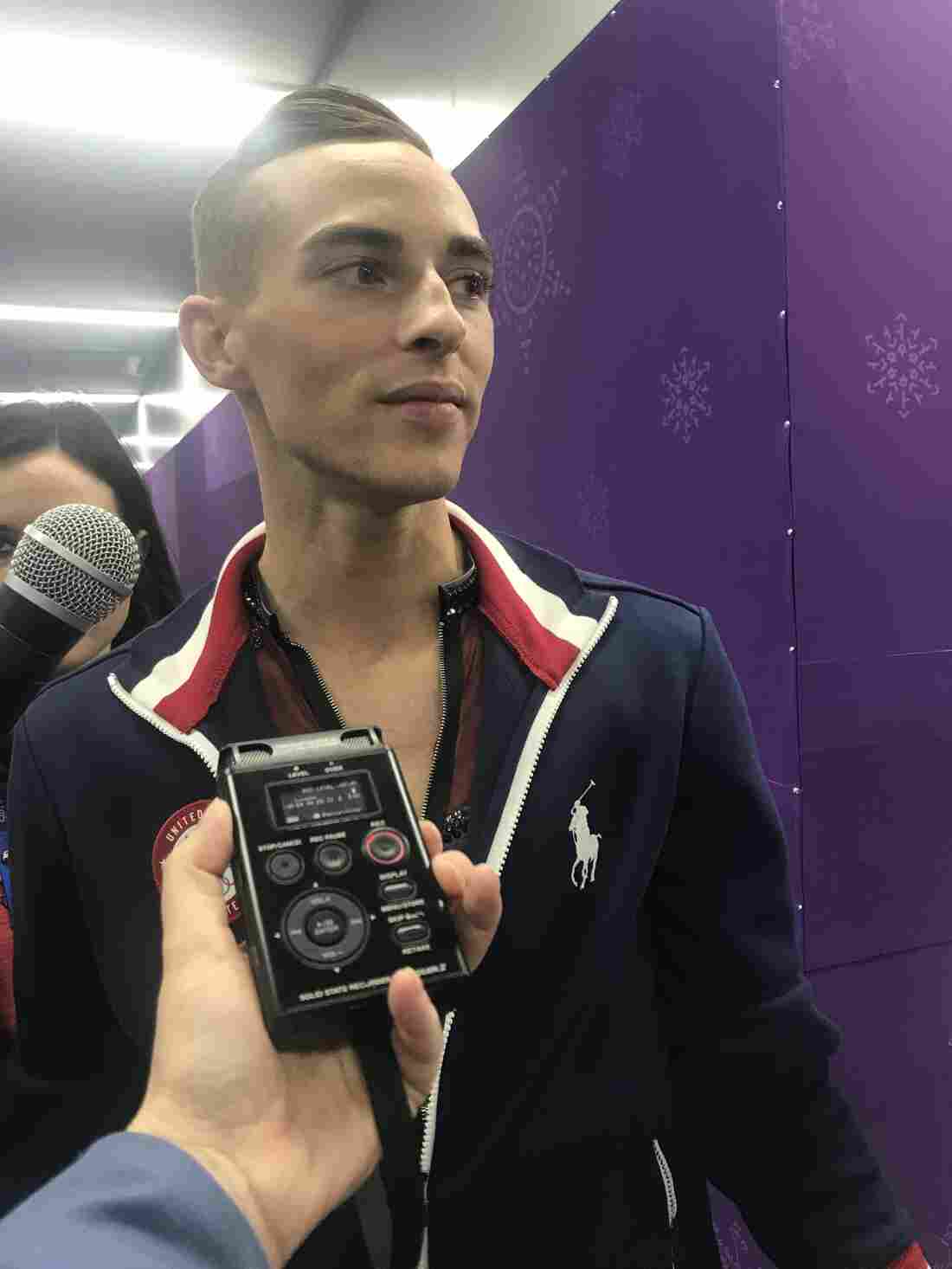 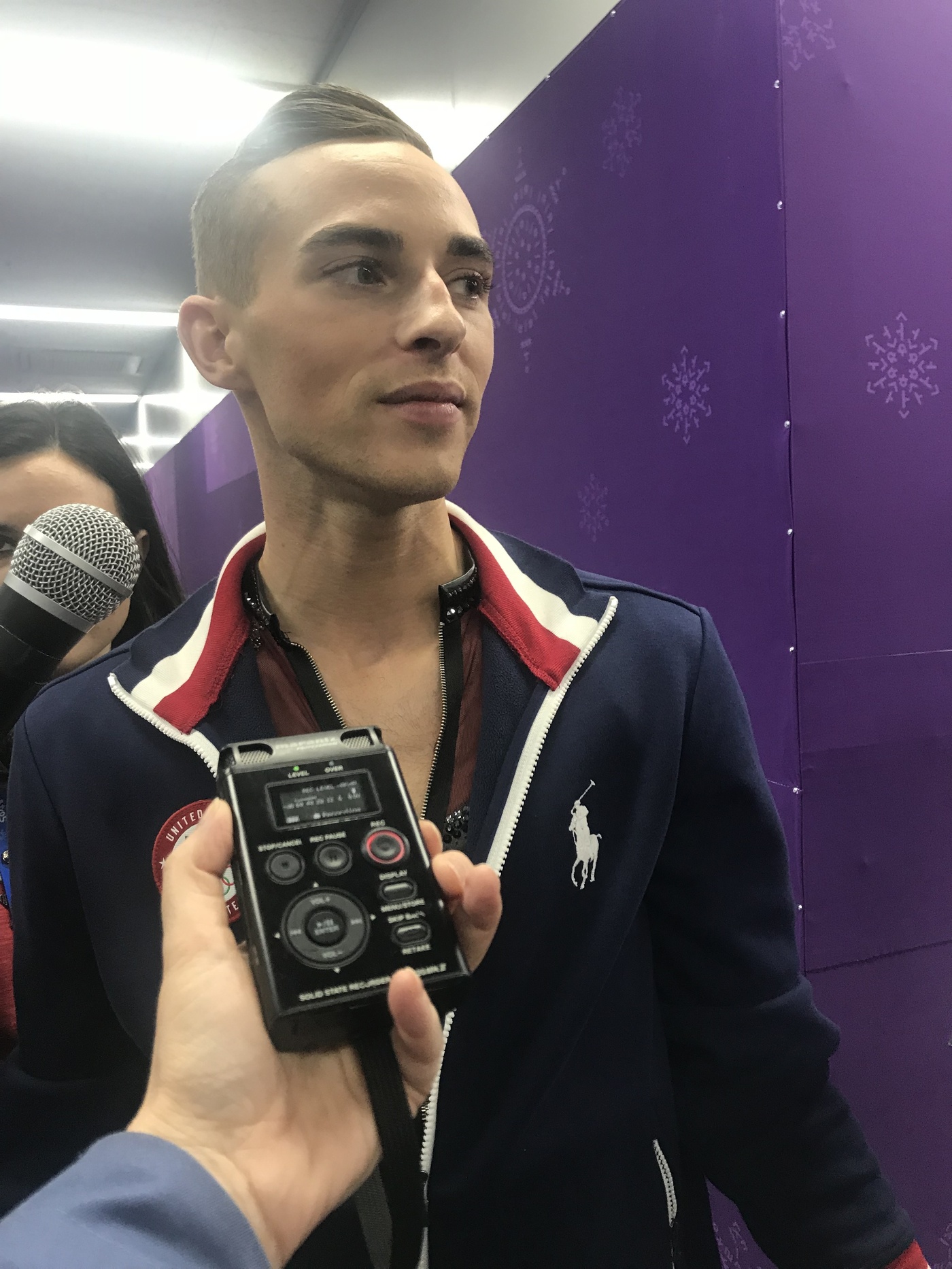 I can tell you that Adam Rippon is as charming and funny in person as you might imagine. He also forever earned my gratitude by making it a point to field questions from me and the other women reporters there, who tend to get out-shouted by the male reporters.

Also, fun fact: I delivered an NPR tee shirt for Rippon to his press team the last night of the Games. No word yet on whether it fits.

You tweeted that sitting behind the biathlon shooting range was a highlight of the Olympics — What made it special?

After I tweeted that, some wags pointed out that if I was in fact behind the shooting range, that would have been a really dangerous place to be. So I guess I was more accurately in front of the range, but right behind the biathletes, watching them shoot. I'm fascinated by biathlon. It requires two totally opposite skills — the all-out endurance of cross-country ski racing, plus the zen calm of target shooting. Being so close to the athletes in the middle of an Olympic event — watching them zoom past, then being so close as they were shooting — was such a visceral thrill. It made me even more of a fan. 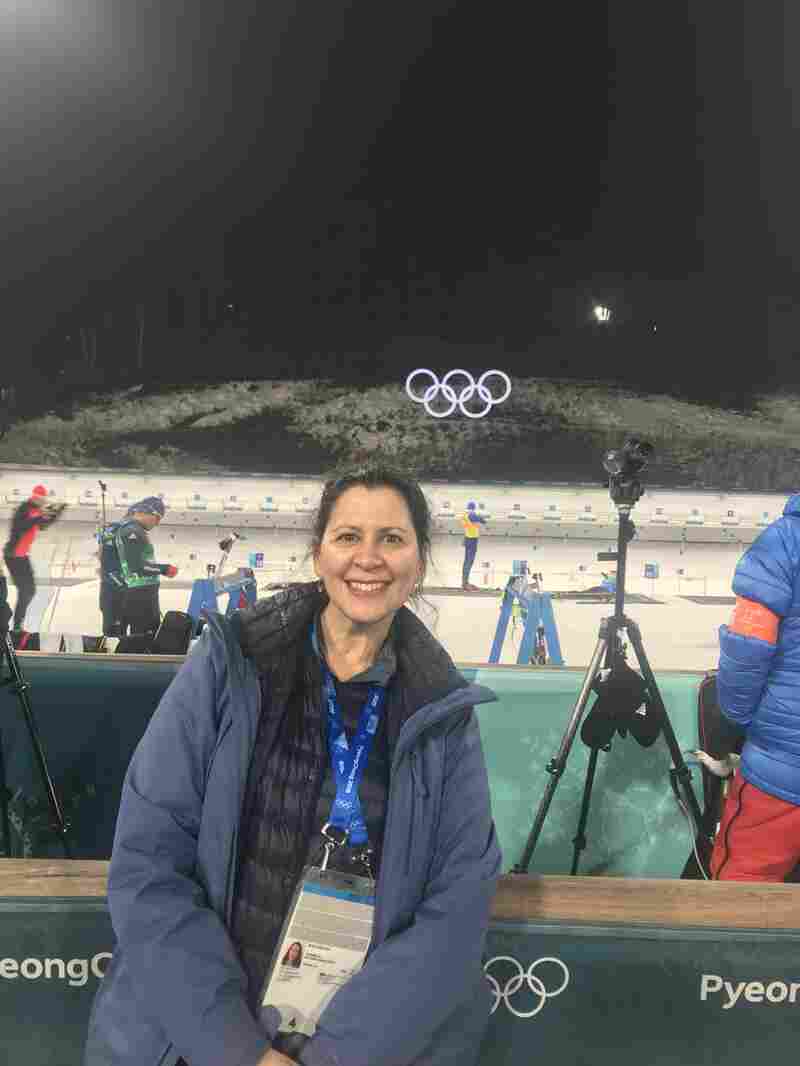 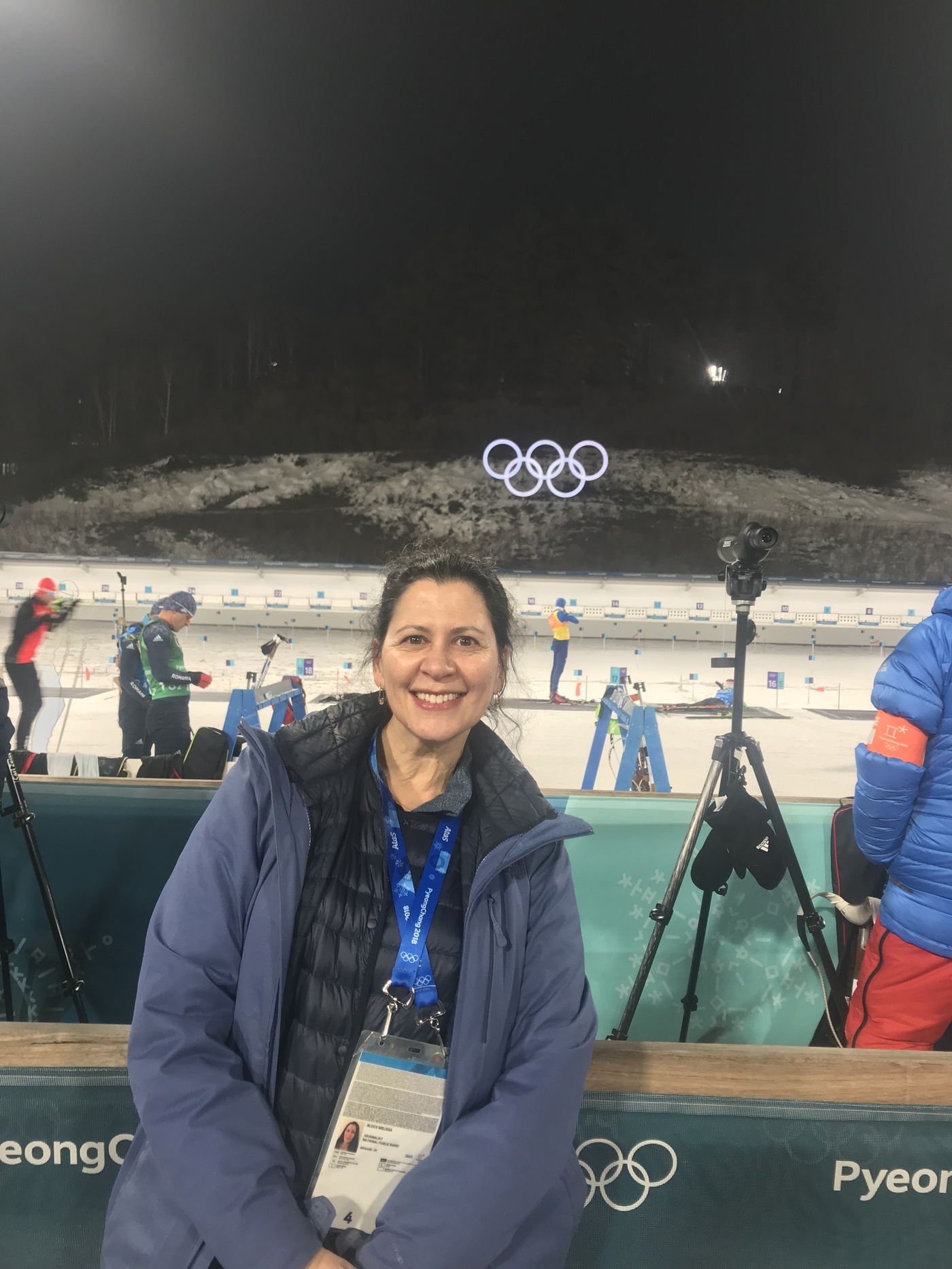 Melissa Block watches biathletes on the shooting range before the men's relay.

If you had to compete in a winter Olympics event, which one would it be?

Oh gosh. Most of the winter sports are so fast, so dangerous, and so terrifying, there's just no way I could even imagine myself doing them. Skeleton, bobsled, luge — careening up to 90 miles an hour on ice? Forget it. Moguls skiing? Hurts my knees just to watch it.

So I keep coming back to biathlon. One of the biathletes I profiled taught me to target shoot, and it was really fun. The trouble is, those biathletes are superhuman in cardiovascular strength. And they're often competing when it's really cold and windy.

I'm afraid that means my Olympic sport is couch sitting, watching it all unfold on a nice big screen. Or with recorder in hand, on the sidelines.