Here Are the Staff's 10 Favorite Episodes 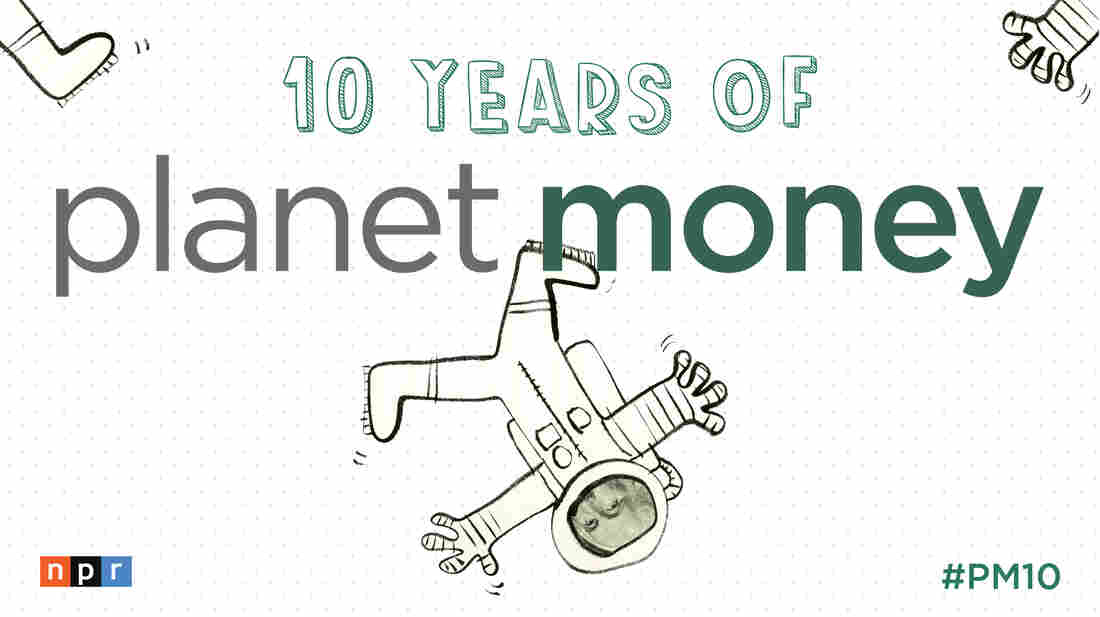 Planet Money is turning 10 years old. It was a risky venture from the start. Planet Money launched as the 2008 financial crisis was hitting full swing, with the ambitious goal of trying to make sense of the big economic forces that were moving the economy in real time, and with stories the average, non-expert would actually want to listen to. If that weren't enough, Planet Money was going to do it with a podcast, a new medium most people hadn't heard of yet.

Ten years later, the economy is roaring ahead, podcasts have exploded as a medium, but there's still plenty of stories to tell and the economic drama continues new characters and new twists. So, in honor of 10 years of Planet Money, the team picked out 10 of their favorite episodes, good places to start if you are new to Planet Money, or podcasts in general. Enjoy.

And thanks for listening! If your favorite episode was left off, let us know.

Tweet @planetmoney and tell us your favorite. Use the hashtag #PM10

The Giant Pool of Money
The episode that started it all. In 2008, NPR teamed up with This American Life to produce a special program about the housing crisis. What does the housing crisis have to do with the turmoil on Wall Street? Why did banks make half-million dollar loans to people without jobs or income? In what would become Planet Money's approach for a decade, hosts Adam Davidson and Alex Blumberg go find the regular people at the heart of the big story to make it all clear and as simple as possible. The success of this episode launched the creation of Planet Money.

Planet Money Buys Oil
Follow along as the team buys 100 barrels of oil — with cash in a briefcase, right in an oil field — and follows it every step of the way, through hauling, resale, through a refinery, and on into someone's gas tank. Each installment explains a different aspect of the oil industry to uncover the mysteries of fossil fuel and how it is used everywhere, and in nearly everything. This is a five-part series. If you listen to just one, go with #2 on how the price of oil is what it is.

The Planet Money T-shirt Project
Possibly the most well-known story we've done. Yup, another series. But a great place to start getting to know Planet Money. We wanted to see inside the global clothing supply chain by having a t-shirt made and traveling the world to follow each step of the manufacturing process — from the farms where the cotton is grown (in the US!) to the factories where the shirts are sewn together. You'll be amazed at the complex world behind an ordinary shirt.

This one comes with video too if that's your thing: Planet Money T-shirt Project Page

The Town That Loves Death
People in La Crosse, Wisconsin, are used to talking about death. In fact, 96 percent of people who die in this small, Midwestern city have specific directions laid out for when they pass. That number is astounding. Nationwide, it's more like 50 percent. In La Crosse, dying has become acceptable dinner conversation for teenagers and senior citizens alike. It's a place that also happens to have the lowest Medicare spending of any region in the country. Take note, America.

The Raisin Outlaw
Marvin Horne was known as the raisin outlaw. His crime: Selling 100 percent of his raisin crop, against the wishes of the Raisin Administrative Committee, a group of farmers that regulates the national raisin supply. He took the case all the way to the Supreme Court. In this episode, Planet Money explores the upside-down world of raisin farming.

The Wells Fargo Hustle
This one earned a Peabody Award in 2016. We go inside the bank branch at the headquarters of Well Fargo, a place where a lot of workers were rewarded for doing some very bad things. We find out just how far the bank was willing to go to pressure employees to break bad.

Open Office
Walls, doors, privacy—if you work a desk job in America, you probably do not have these luxuries anymore. In this episode, we hear how a vision on a mountaintop led to the birth of the open office. And we meet the stylish man that brought that idea to life (and, probably, to a workplace near you).

The Machine Comes To Town
American manufacturing is dead, right? Not exactly. The dollar value of what we make here keeps going up and up and up. But the success of American manufacturers has come at a cost. The number of manufacturing jobs in this country has collapsed as factories replace workers with machines. In this episode, Planet Money takes a trip to Greenville, South Carolina, where factories filled with bright shiny machines sit just across the train tracks from shuttered old mills. It's the perfect place to answer the question – what happens to a place when the machines come and thrive, and the best job option isn't to compete against the robots, but to make friends with them

Georgetown, Louisiana, Part Two
This is part two of a two-part series. Listen to part one here.

In 1838, Jesuit priests sold a group of 272 men, women, and children - slaves - to pay off Georgetown University's debts. The slaves were sent from Maryland to Louisiana. In part one of this two-part episode, we told the story of how the residents of a small town discovered where they'd come from. Now in part two, we ask what, if anything, Georgetown owes the descendants of those slaves.

The Birth Of The Minimum Wage
For most of U.S. history, there was no minimum wage. A few times, politicians passed laws tiptoeing toward a minimum. But the Supreme Court struck those laws down. In this episode, we find out how the U.S. finally got a minimum wage. It's a story of exploding bakeries, a blue eagle, and a guy who may or may not have been drunk.

Find weekly episodes of Planet Money on NPR One, Apple Podcasts and wherever podcasts are available.

More About Planet Money:
Planet Money launched in 2008 and, since then, it has won many awards including a Peabody and an Edward R. Murrow Award in 2017 for our investigation into Wells Fargo's retaliation against whistleblowers.

In 2017, the Planet Money team launched a second podcast, The Indicator, a daily, short story about the economy. Think of it as a daily dose of insight to go along with the news.