Accessibility links
Q&A: NPR's First "Future Correspondent", Elise Hu of Future You : NPR Extra Future You with Elise Hu is a our new monthly video series exploring how today's emerging science is changing what it means to be human.

You may recognize Elise from her Gracie award winning video series "Elise Tries" where she seeks out different experiences all across East Asia, from k-pop to pore vacuuming. Now, she's NPR's first "future correspondent" exploring how technology is changing what it means to be human.

Before going to Seoul, you covered the intersection of technology and culture. You are now NPR's first "future correspondent" — what does that mean? Did your work in Asia prepare you to spot trends of the future?

It's inexact, of course, but the questions I'm reporting concern the trends shaping where we're going as human beings and humanity thirty years from now. They are big ideas, but I'm focusing them around more digestible bits. The first exploration, this season, is really zeroing in on the human body and the most powerful computer we know of — the human brain. My work as a foreign correspondent will always influence my perspective. I don't know if it necessarily made me better able to spot trends but it expanded my visual field, metaphorically, of what I think is "normal" or "possible," which then led me to creating this show. Elise getting gel injected into a brain bonnet.

When you opened NPR's Seoul bureau, we wrote that "South Korea is at the nexus of geopolitical, business, technology and culture stories." Did you see anything during your time reporting from Asia that seemed futuristic and that you are now seeing here? Trends you covered in the Elise Tries videos like food of the future or the robo toilets.

A lot of what's going on in Japan and Korea is designing for a population that's rapidly aging, so more and more of what they're building is about supporting people who increasingly live alone and are less mobile or about automating more services like care-taking so that an aging population can maintain a quality of life. The demographic trends of aging and population decline are also evident in the Western world, but just happening a little slower due to immigration. So in that sense, Japan and Korea ARE the future. And since US public transportation infrastructure is so outdated, the bullet trains out East seem way futuristic compared to what we've got.

Why were you interested in exploring ways in which the future has already arrived?

As a reporter and just as a human, I'm always going to be curious about how things got the way they are, but that's largely covered by many journalists who are far more talented than me. I'm interested in trying new things, and building creative projects from scratch, so it made sense to me to look in the other direction — forward — and try and be hopeful about that.

Based off what you've seen making your series so far, what are you most excited about being part of our lives in 2050?

We have NO idea what life will be like in 2050. That timeline is SO FAR OUT given the accelerated rate of technological change. All I can really do is ask the questions about what kind of future we want or are currently designing, so that the conversations about the lives we'll lead — in concert with tech — are happening before it's too late to affect what happens. 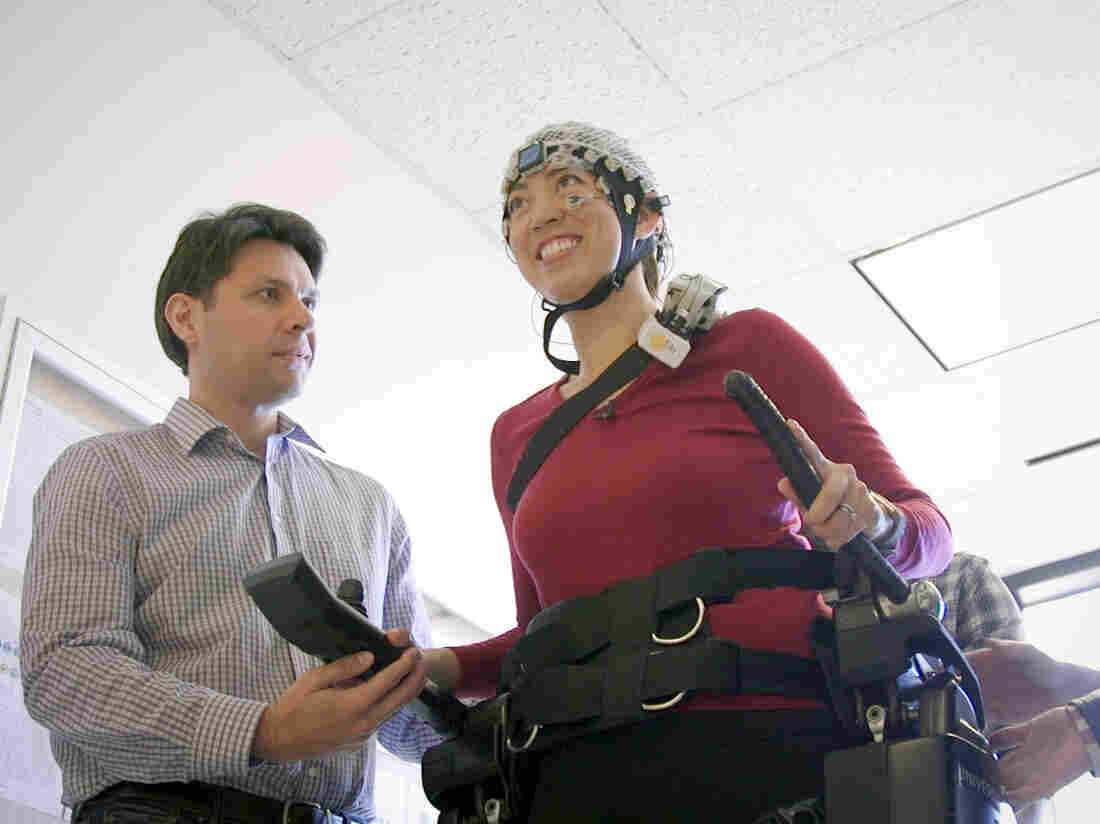 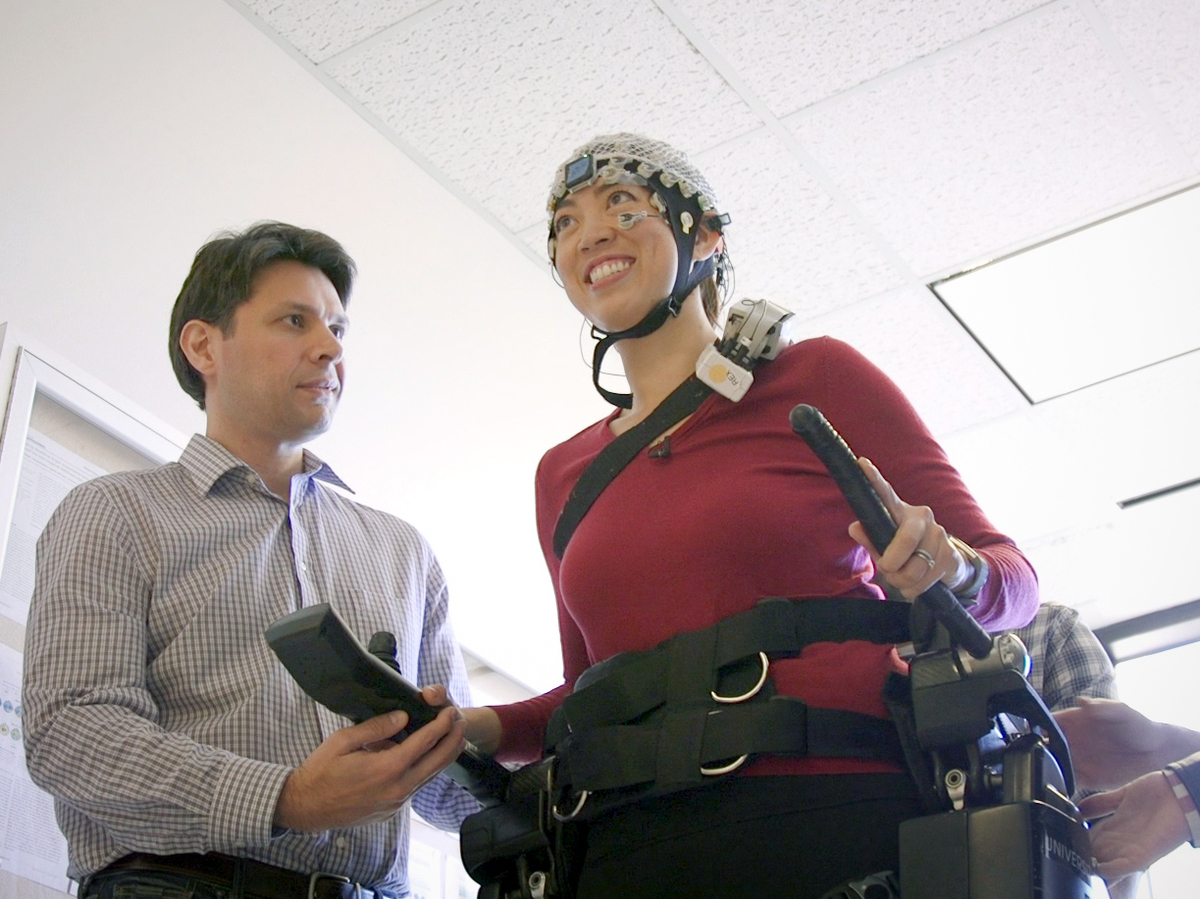 Elise testing out a robot suit.

Do you foresee any disparities in gaining access to technology that can improve human capabilities in the future?

Yes. Access is one of the thorniest problems. As we will explore in season one of Future You, the technology that's available to humans right now, whether it's helping paraplegics walk again, or curing Parkinson's symptoms, tends to begin as helpful and healing. But what's to stop the wealthy and healthy and able-bodied from acquiring the same tech that gives someone superior strength, or better memory, to AUGMENT themselves to become a class of super-humans? The class divide, when applied to biological abilities, could become exacerbated.

How do you think social media and the internet will impact the future generation of 2050?

It already is in substantial ways. I would point you to the work of tech ethicist Tristan Harris, who argues it's downgrading humans and we need to have a global conversation about it.

This is where I'm gonna tease an upcoming It's Been a Minute podcast episode I'm hosting in which Tristan and I have a full conversation about your very question. Tune in May 21st.

Looking back on filming this season, what was your proudest moment?

We're only a few episodes in, but I'm so proud of the team. It's a rare privilege for me to get such a talented team of photographers and producers and animators working in concert to support a central reporting question — who will we be? I'm so thrilled to be collaborating and to have collaborators like the Future You team.

We have to ask, what would be your ideal human capability in 2050?

Deeper empathy. I think if we could all have headsets or caps that let us feel each other more — whether it's one another's joy or sadness or worry — that could unleash a level of understanding and cooperation that is unseen right now.

Stay Connected: Be sure to tune in by visiting npr.org/futureyou on May 7th, join the conversation with #FutureHu and follow Elise Hu at @EliseWho.