August 31, 2012 • Ever wonder how NPR's Shots blog comes up with so many science puns? You're not the only one, and The Curious Listener series has the answer.

August 31, 2012 • These NPR mentions in other media demonstrate the wide range of news and information we cover and why our curious listeners often say, "I heard it on NPR."

Cancel Your Brunch: Behind The Scenes Of Breaking Election News

August 29, 2012 • A timeline of NPR's coverage as we cover the live coverage of how NPR brought you Mitt Romney announcing Paul Ryan as his running mate.

August 28, 2012 • For news junkies like us, even NPR's extensive on air and online coverage of the Republican and Democratic National Conventions is sometimes not enough. Here are Twitter feeds to follow from NPR journalists covering the campaigns.

Inside the Suitcase: What We Are Taking to the Conventions

August 27, 2012 • The NPR Election Team has been busy preparing for the Republican and Democratic National Conventions. Take a peek at what they've packed to be prepared for this kind of reporting trip. 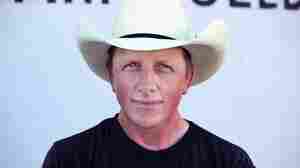 Christopher Hamsher, of Ontario, Oregon, lost his job recently. "I went ahead and opened my big mouth," says Hamsher. After overhearing a colleague speak ill of him Hamsher confronted him and was reported by a co-worker. He says because of the store's zero tolerance harassment policy, he was let go immediately. Now Hamsher is collecting social security and working for meals at a local bar. John Rosman/OPB hide caption

A Dot on the Map: The Stories that Bind Towns and People

August 24, 2012 • Oregon Public Broadcasting's daily conversation program Think Out Loud has been creating a map of stories by taking a hyper-local look at the communities across Oregon and southwest Washington, spending time exploring and discovering the things that connect each town to the rest of the state.

August 24, 2012 • From a self-proclaimed 'fangirl,' one NPR staffer's experience at a very special Tiny Desk Concert.

A Look to the Future: One Archive Tape at a Time

August 23, 2012 • The NPR Library is making waves in the world of newsroom libraries, and we certainly aren't the only ones who have noticed. We checked in with the pros behind the operation to find out just what they've been up to.

August 22, 2012 • 93% of the U.S. population is within the listening area of one or more stations that carry NPR programming.

August 21, 2012 • Whether you're an elephant, a donkey or the animal of your choice: you won't miss a beat with national convention coverage from NPR News.

August 20, 2012 • It's National Radio Day, and we're celebrating by paying tribute to one of the fathers of radio, Guglielmo Marconi, and to its future. Show your support by sharing one of the graphics below and let us know what caught your ear today.

August 17, 2012 • Before the Olympics came to a close on Sunday, Morning Edition producer Ben Bergman chatted with one of the night's hometown acts, Muse. All three English rockers lined up to show some international NPR love while they were at it.