Accessibility links
How Scams Worked In The 1800s : NPR History Dept. Women, priests, dapperly dressed gents — no one could be trusted. 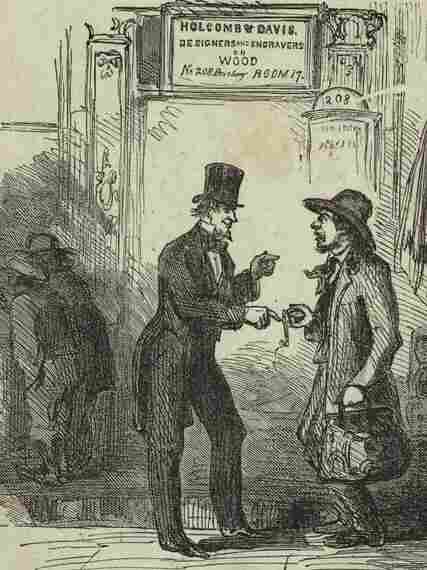 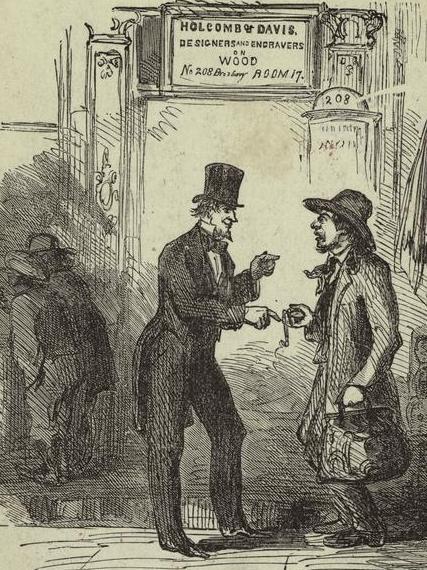 A New York City swindler tries to cheat a man from the country, 1868.

These days we are constantly warned of scams and schemes designed to hoodwink us. The FBI sends out scam alerts from its Internet Crime Center. The Federal Trade Commission cautions against all kinds of fraudulence, from the recent Anthem Hack Attack to IRS impostors. And this week the AARP Fraud Watch Network is reminding people of Valentine's Day scams, including fake florists and cash-on-delivery hornswogglers.

But in the spring of 1859, folks were concerned about another kind of hustle: A man who went by the name of A.V. Lamartine drifted from town to town in the Midwest — pretending to attempt suicide.

He would walk into a hotel — according to newspaper accounts from Salem, Ore., to Richmond, Va., and other places — and appear depressed as he requested a room. Once settled in, he would ring a bell for assistance, and when someone arrived, Lamartine would point to an empty bottle on the table labeled "2 ounces of laudanum" and call for a clergyman.

People rushing to his bedside to help him would find a suicide note. The Good Samaritans would summon a doctor, administer emetics and nurse him as he recovered.

Somehow Lamartine knew his situation would engender medical and financial assistance from kind strangers in the 19th century. The scenarios ended this way, as one Brooklyn reporter explained: "He is restored with difficulty and sympathetic people raise a purse for him and he departs.

Using this modus operandi, the reporter added, Lamartine was making his way across Ohio — raising $25 in Dayton and $40 in Sandusky and departing "with a free pass on the railroad to commit suicide at some other place."

It seems like a crazy way to make a living. But in earlier America, cheaters concocted the kookiest cons.

Arguably, the 1800s were the Golden Age of schemes. The term "confidence man" or "con man" was probably coined midcentury and, according to the New York Times, the Brooklyn Bridge was sold more than once to unsuspecting folks in the 1880s and 1890s.

"The world was at once smaller and bigger in the 19th century," says Amy Reading, "and it can be hard to get our minds around the difference."

Reading is the author of The Mark Inside: A Perfect Swindle, a Cunning Revenge, and a Small History of the Big Con. "Modes of communication were not so swift," she says, "so it was easier for itinerant swindlers to move from town to town, practicing the same small cons within a given region without getting caught."

At the same time, there were also fewer people in the world, so there were fewer degrees of separation, even in urban areas. "In my research," Reading says, "I was astonished to find instances where one person described a swindler he'd encountered, and then another person ran into the same swindler and recognized him on the basis of his friend's description. This is, in part, because con men leveraged people's interpersonal networks to move from mark to mark."

Con artists, chiselers, four-flushers and grifters had their own methods and behavior patterns, she says, and "that is exactly what the police could use to catch them."

Today we are familiar with some of the larger ripoffs, such as three-card monte and the Brooklyn Bridge sales. But here are some lesser-known scams of the 1800s:

The American capacity for gullibility, observes Amy Reading, "is unchanging over time because it is a function of how we are programmed, by biology and culture, to take in the external world. Any of our tools of empiricism, which generally hold us in pretty good stead, can also be used against us."

A prime example, she says, "is stage magic — our susceptibility to it has certainly not decreased over the centuries. ... Our senses, and our assumptions about how the world operates, are exactly what can be manipulated against us — even when we know that and are primed for it."

Not coincidentally, she says, "stage magic exploded in popularity in the second half of the 19th century, only to die back to present levels with the introduction of cinema."

What do change over time "are the particular rituals and customs and expectations and rules pertaining to trust in society," she adds. "As those norms are shifting, as they did quite massively in the 19th century, you have the perfect conditions for exploiting the gaps between new and old. That shift to modernity was often the very script of the con."