The Secret History Of Knock-Knock Jokes

The Secret History Of Knock-Knock Jokes 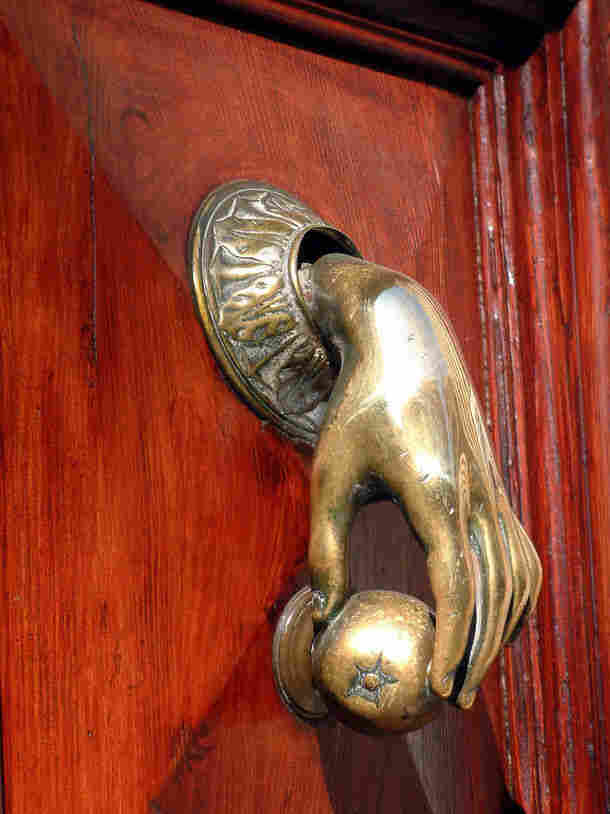 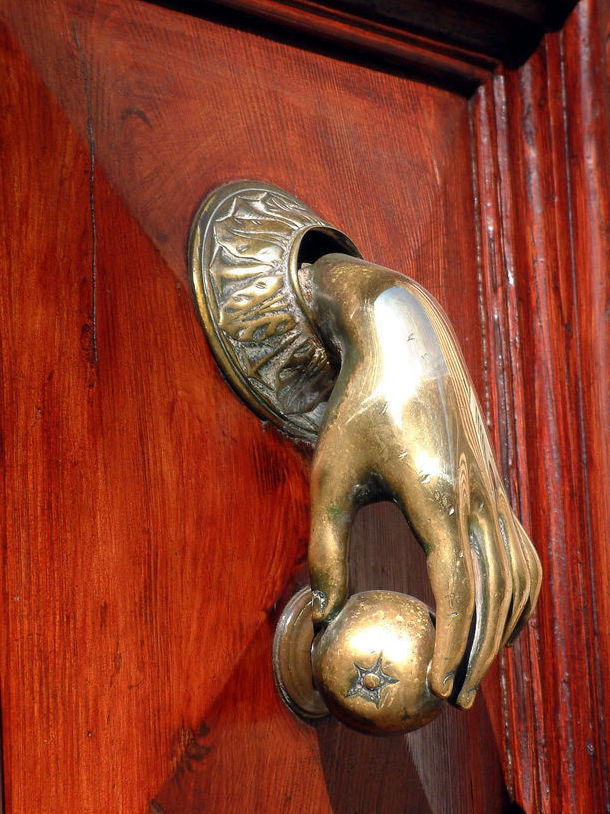 Joking like this used to be considered a sickness by some people.

The knock-knock joke has been a staple of American humor since the early 20th century. With its repetitive set-up and wordplay punchline, the form has been invoked — and understood — by people of all ages and sensibilities.

But knock-knock jokes have not always been universally appreciated. In fact, in the heyday of the knock-knock's popularity, certain critics railed against it.

Somehow — knock on wood — it has endured.

When Melissa Douty — a stand-up comic who competed in the 2015 World Series of Comedy last week — was interviewed by a reporter in Roanoke, Va., recently, she said her career began with a knock-knock joke.

The first joke that the 43-year-old Virginia comic remembers telling — at age 4 or 5 — was this: "Knock knock. Who's there? Mickey Mouse. Mickey Mouse who? Mickey Mouse's underwear."

So that, for better or worse, was Douty's initiation. But who told the first knock-knock joke?

Before there were knock-knock jokes — as we know them — there were "Do You Know" jokes. Writing in the Oakland Tribune, Merely McEvoy recalled that around 1900, a jokester would walk up to someone and pop a question like: "Do you know Arthur?" And the unsuspecting listener would reply, "Arthur who?" And the jokester would say "Arthurmometer!" and run off laughing.

"Jokes, like comets have definite orbits," McEvoy observed on May 26, 1922. "Most of them travel in elipses of 20 years." The Arthurmometer-type joke, he wrote, had returned — as a new type of jest or a "nifty."

Such nifties were popular among the flappers, McEvoy noted, who would ask: "Have you ever heard of Hiawatha?" And you would reply: "Hiawatha who?" And the flapper would say: "Hiawatha a good girl ... till I met you."

"Can it last?" McEvoy wondered. "Probably not. Let us hope that soon I will be able to meet you on the street and ask if you know Gladys and you will say Gladys who and I will say Gladys Zellitsover." 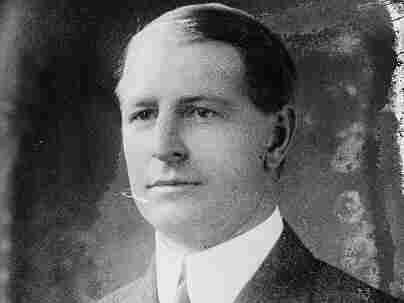 But the mania only morphed into an even more popular form: the knock-knock joke. And by the mid 1930s, knock-knock jokes were to be heard everywhere. Strangers told them on the streets. Businesses staged knock-knock contests. Swing orchestras wove knock-knock schtick into songs.

The craze was especially potent in Pennsylvania. The Harrisburg Telegraph of June 17, 1936, credited the rise of Knock-Knock Mania to the selection of Col. Frank Knox as the running mate for that year's Republican presidential candidate, Alf Landon. People at WKBO radio station in Harrisburg told Knox jokes on air throughout the day. The Telegraph printed a couple of punchline examples: Cecil have music wherever she goes. And Ammonia a bird in a gilded cage.

"You can't turn the radio on anymore without getting one of the Knock-Knock gags," Jean Mackenzie observed in a radio-listening column in the July 25, 1936, News Herald of Franklin, Pa. "They're fun and when some of the better orchestras perform them, they're screams. But you've probably found that out for yourself."

Merchants chimed in. The Edgmont Cash & Carry grocery in Chester, Pa., ran a display ad in the Delaware County Times: Knock! Knock! Who's there? Don. Don who? Don forget to do your shopping at the Cash and Carry ..."

And columnist Ken Murray passed along this in the Altoona Tribune on July 30, 1936: "Evidently the anti-New Deal Democrats are also playing that new game.

"Al be seeing you in Detroit."

At the end of her duplicate bridge column in the Reading Times on July 31, 1936, Constance Gerhard tacked on a handful of rapid-fire knock-knocks. Here are three of the punchlines: 1) Tarzan stripes forever. 2) Mike country 'tis of thee. 3) Agnew I'd seen you somewhere before.

And back in Chester, the Edgmont grocery expanded its knock-knocking marketing campaign by crowdsourcing usable ad copy. In August, the company announced a Knock! Knock! Contest with prizes. One of the examples in the Delaware County Daily Times: Knock knock. Who's there? Teresa. Teresa who? Teresa Crowd! 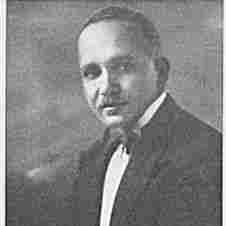 From the East Coast to the West Coast, Americans went nuts over knock-knocks. "The whole thing is a game," the Kerrville Times in Texas explained in August of 1936. "Who started it, where, and what it is called is a mystery."

Knock-knock clubs formed in towns in Illinois, Iowa and Kansas. In Missouri a popular version of the joke came from a college campus: Popeye. Popeye need some money. The Knock-Knock Song by Vincent Lopez, et al., became a favorite of some big bands. "That tune inflicted a fiendish game upon an America already suffering through the Depression," Lopez wrote in Lopez Speaking, his 1960s autobiography,

Lopez, Fletcher Henderson and other swing orchestra leaders incorporated the audience-participation novelty song into their acts.

Talk about going viral: Paul Harrison, a syndicated gossip columnist, noted in 1936 that "Hollywood has failed to escape infection by the germ of that game Knock-Knock ... that has grown-ups as well as children going daffy." He passed along new kickers, including: Sarah doctor in the house?

By September of 1936, spoilsports were ready for the knock-knock fad to fade away. "The best knock-knock was made by me," observed Heywood Hale Broun in his column, which appeared in the Reading Times. "It goes: 'Knock-knock. Who's there? A gang of vigilantes armed with machine guns, leather straps and brass knuckles to thump the breath out of anybody who persists in playing this blame fool knock-knock game.' "

The knocks against knock-knocks seem to have intensified sometime after the re-election of Franklin D. Roosevelt in 1936. People who disliked the puns voiced their objections, and people who loved knock-knock jokes were said to have social problems.

After all, in Europe, incessant wordplay was being treated as a psychological condition. Sigmund Freud had impugned puns in his 1905 book Jokes and Their Relation to the Unconcious. In 1929, Austrian psychoanalyst A.A. Brill was exploring a malady termed Witzelsucht — an addiction to wisecracks, according to Psychology Today. And German neurologist Otfrid Foerster identified manic punning in what eventually became known as Foerster's syndrome.

Writing near the end of 1936, D.A. Laird — director of the Rivercrest Psychological Laboratory at Colgate University — threw cold water on the knock-knock fever in America. He delivered a lengthy screed against mass manias of many types — including knock-knock jokes. Laird spoke of people who incessantly pun and of those who enjoyed the jokes as if they were sick.

In an article that appeared in papers throughout the country, Laird lumped knock-knock jokes in with other "absurd stunts which became crazes and which occupied the main interests of thousands of young people."

He defined knock-knock jokes as one of those "catch-question games, the answers to which no reasonable person could possibly guess."

Citing the scientific work of craze-experts E.S. Bogardus and L.L. Bernard, "the people most likely to take up these pointless games in an enthusiastic way are those folk who like to appear smart and bright by exhibiting a pseudo-intellectual activity. And since no one could possibly guess the right answer to these games, the person starting any of them has a feeling of superiority, a false belief that he is smarter than the other person."

In a weird twist of history. D.A. Laird — who appeared to consider punny repartee to be tedious — also served a stint as the faculty adviser of Banter, the campus humor magazine at Colgate.

Are knock-knock jokes funny or not? Are they examples of high wittiness or half-wittedness? The battle continues today.

However, in the Kids N Comedy shows at the Gotham Comedy Club in Chelsea, the New York Times reports regularly, clubgoers needn't worry that young stand-up comedians will perform knock-knock jokes. "This crew is sophisticated," the Times opines.

But apparently knock-knock jokes are sophisticated enough to deserve a correction in the New York Times. In 2013, the newspaper apologized for incorrectly crediting a knock-knock joke in a Ben Affleck movie. You may remember the joke. The punchline included the name of the movie: Argo.

Something to the effect of: Argo jump in the lake.

"I think knock-knock jokes always work ... with kids," says comedian Melissa Douty. "I haven't heard a new knock-knock joke in years, and I'm not sure I've ever heard a really funny one! I think I liked the Mickey Mouse joke so much because it had the word underwear in it and I felt like I was saying something wrong. I was a very edgy 5-year-old comic. For me, it was the perfect starting point for joke telling."