Accessibility links
After Selma, King's March On Ballot Boxes : NPR History Dept. Tucked away in the archives of the University of South Carolina is a video clip of a rousing King speech. 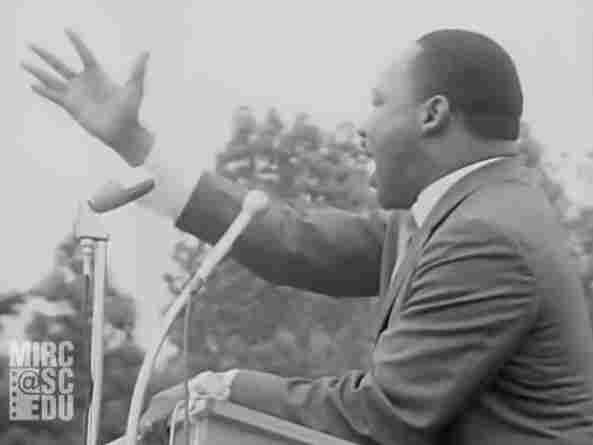 Dr. Martin Luther King Jr. — who was assassinated 47 years ago this week — will long be remembered for the many meaningful marches he led or joined, including ones on Washington in 1963, on Frankfort, Ky., in 1964 and from Selma to Montgomery, Ala., in 1965.

This last peregrination — a march joined by thousands of compatriots from all over the country — led to the Voting Rights Act of 1965. The march has been commemorated in books, on websites and in movies, such as the recent much-lauded Selma.

In 1966, King turned his sights toward another kind of march, a more personal movement that called on people in an individual and private way. Standing at a podium on a damp Sunday — Mother's Day — in Kingstree, S.C., King told a crowd of local people that their struggle wasn't over. Though Congress had passed legislation assuring everyone the right to vote without interference, he said, they were only beginning the battle.

King said that people must make sure all of their friends and family register to vote and, after getting people registered, must take on "another, even greater responsibility. And that is to go out and vote."

You can watch the rousing speech here in a fascinating clip — with sound beginning around 1:17. It is one of several little-known pieces of history that can be found in the digital archives of the University of South Carolina.

"It is an electrifying moment," says Bobby J. Donaldson, who teaches history and African-American studies at the University of South Carolina. In the film clip, we see King "away from the glare of the national limelight — King in his element among 'plain folk,' grass-roots community members who are eager to realize the full fruits of the long civil rights struggle."

Donaldson adds: "We not only hear King at his oratorical best, but we also see and hear thousands of people who respond to his call with shouts of amen and affirmation."

The speech, Donaldson says, "is at once a review of the long journey of social struggle and a forward glance at the opportunities of political engagement. He reminds the audience of the maligned history of black Reconstruction in South Carolina and likens the current movement to a second Reconstruction."

Over the next few days, Donaldson and other historians will gather at the University of South Carolina for the Media & Civil Rights History Symposium.

In the speech — which was delivered in early May 1966 and echoes other speeches of the era — King says:

"Let us march on ballot boxes ... so men and women will no longer walk the streets in search for jobs that do not exist. ...

"Let us march on ballot boxes until every valley shall be exalted, till every mountain and hill shall be made low, until the rough places are made plain and the crooked places straight and the glory of the Lord shall be revealed. ...

Words for all Americans to ponder as the next round of elections spins toward us.