Accessibility links
When Wearing Shorts Was Taboo : NPR History Dept. In certain places in American history, showing a little leg has been illegal — for men and women. 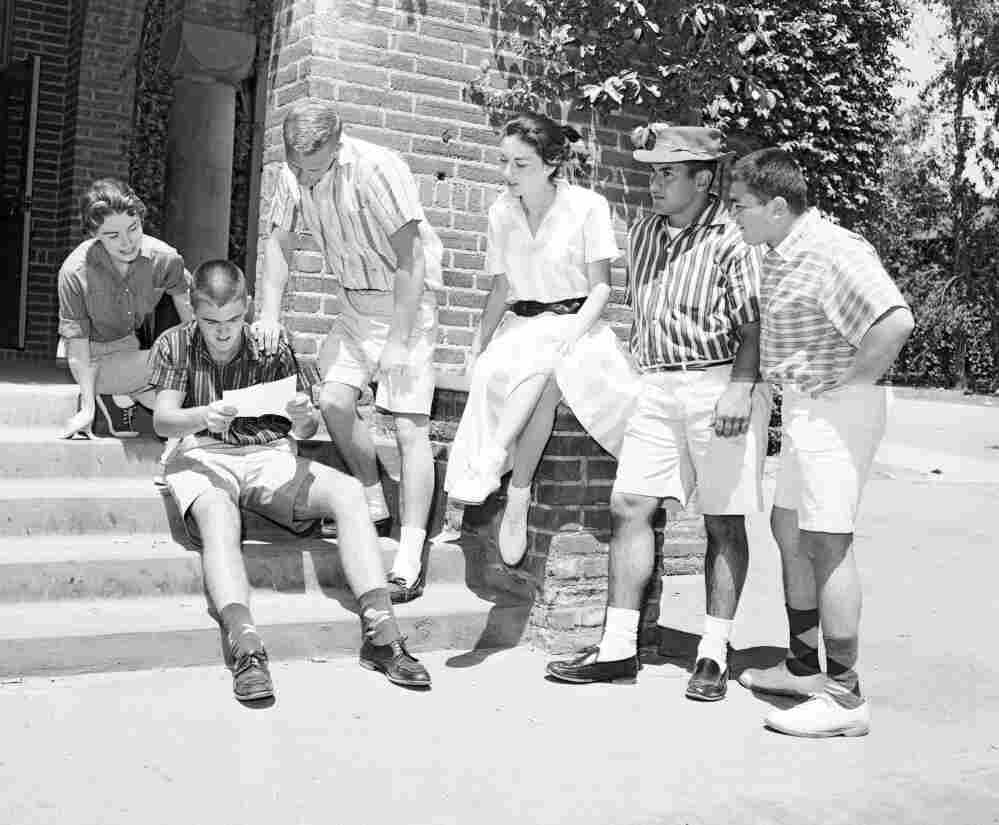 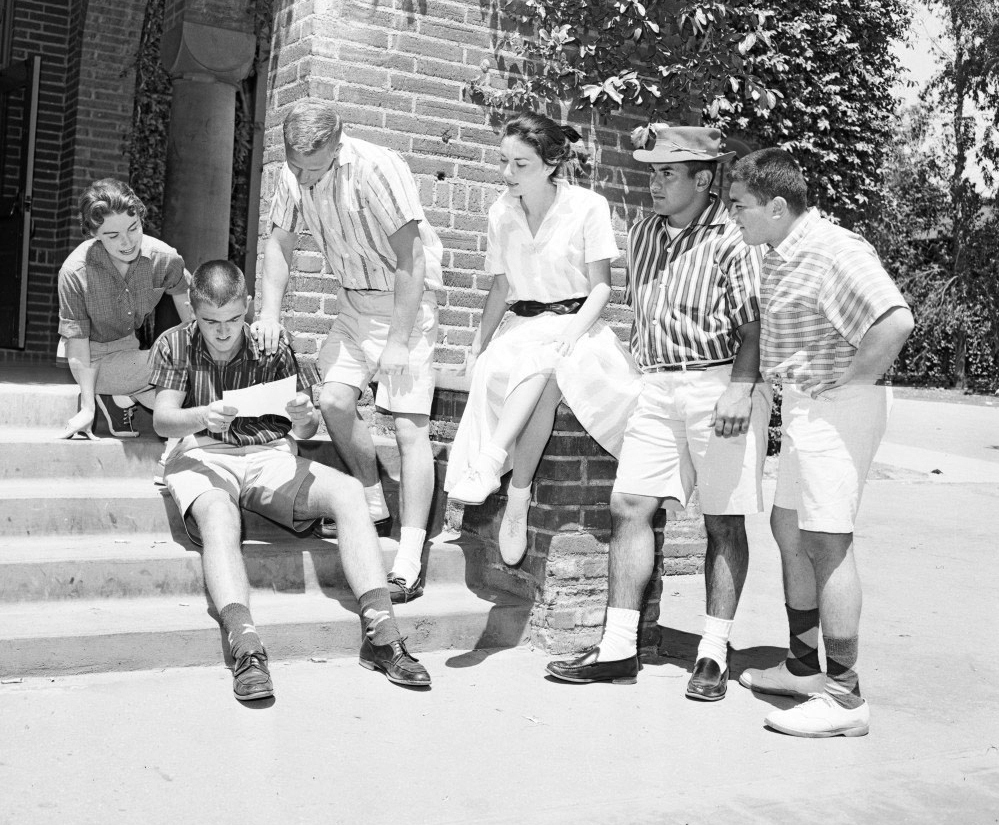 Students at Los Angeles City College gather to read about the campus ban on shorts, 1958.

As the weather warms more and more and people wear less and less, it's sometimes hard for Americans to remember that there are cultures in other parts of the world that enforce severe dress codes.

Or that certain communities in our own nation's past also imposed strict clothing prohibitions. Not too long ago, in fact, lawmakers from Florida to Illinois passed regulations banning saggy pants.

Sagging Pants And The Long History Of 'Dangerous' Street Fashion

But way before those sartorial strictures were implemented, American towns were cracking down on short pants. The city of Honesdale, Pa., for instance, banned the wearing of shorts in 1938, according to the Moberly Monitor-Index in Missouri. "Honesdale is a modest town, not a bathing beach," one city leader told the newspaper.

The city council of Monahans, Texas, passed an ordinance in 1944 that banned women in shorts from public streets, according to The New York Times of the day.

During the summer of 1945, women were prohibited from wearing shorts in certain Illinois municipalities — such as Decatur and Vandalia — the Associated Press reported.

In May 1959, the AP noted that the city council of Plattsburgh, N.Y., had voted to ban the wearing of shorts by anyone over 16 years old on city streets. Violators were liable to receive a $25 fine or 25 days in jail.

The tradition of draconian dress codes runs like a solid thread in the loosely woven fabric of American society.

Over the centuries, Lee says, "that Puritan background has continued to influence governments — and other ruling bodies — who seek to control the outward appearance of Americans, either as written law or cultural norms."

Colleges have also been battlegrounds. In 1958, Los Angeles City College issued a dictum against Bermuda shorts. Students questioned the fairness in a story by the United Press. "Some of the drama students are allowed to go around in beards," one student protested.

A dean of the school told the UP, "One day last year a boy came to school in something like a bikini ... We can't have that — we have to draw the line some place." 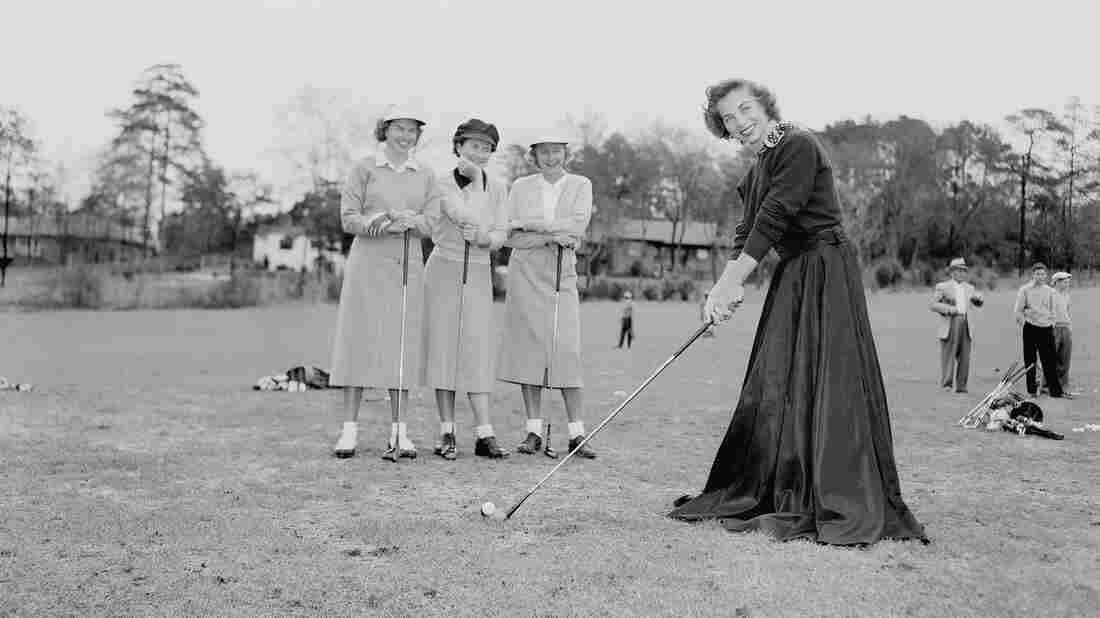 A golfer wears a long black skirt in mock protest of the USGA ban on golfing shorts in tournament play, 1953. AP hide caption 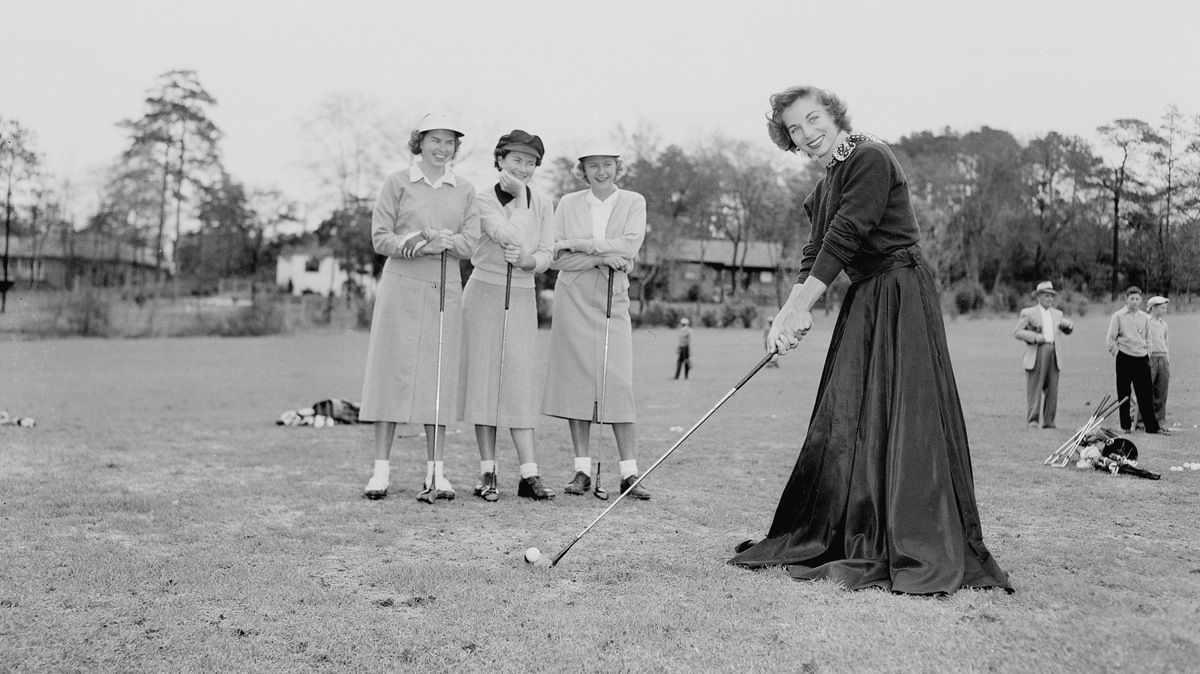 A golfer wears a long black skirt in mock protest of the USGA ban on golfing shorts in tournament play, 1953.

Taboos in clothing become more noticeable when there is a backlash against them, says Lee. She points to the comfort-for-women pioneer Amelia Jenks Bloomer, a Victorian-era advocate of women's rights, "who advocated for bifurcated garments for women specifically because it was taboo."

As the Aug. 26, 1934, New York Times observed: "The Bloomer dress became a sensation and a scandal. Ministers preached against it, little boys followed it in the street with catcalls and balls of mud. Even the feminists weakened under pressure and finally abandoned it."

True acceptance of pants as appropriate attire for women, however, "didn't become generally accepted until the 1930s — when Hollywood's elite — such as Katharine Hepburn — began wearing them."

Shorts were another matter. In the early 1950s, the United States Golf Association banned golfing shorts for amateur tournament play.

By the 1980s, the USGA had lifted the ban. But the Professional Golf Association, according to the Arizona Republic, still prohibits men from wearing shorts during sanctioned tournaments. 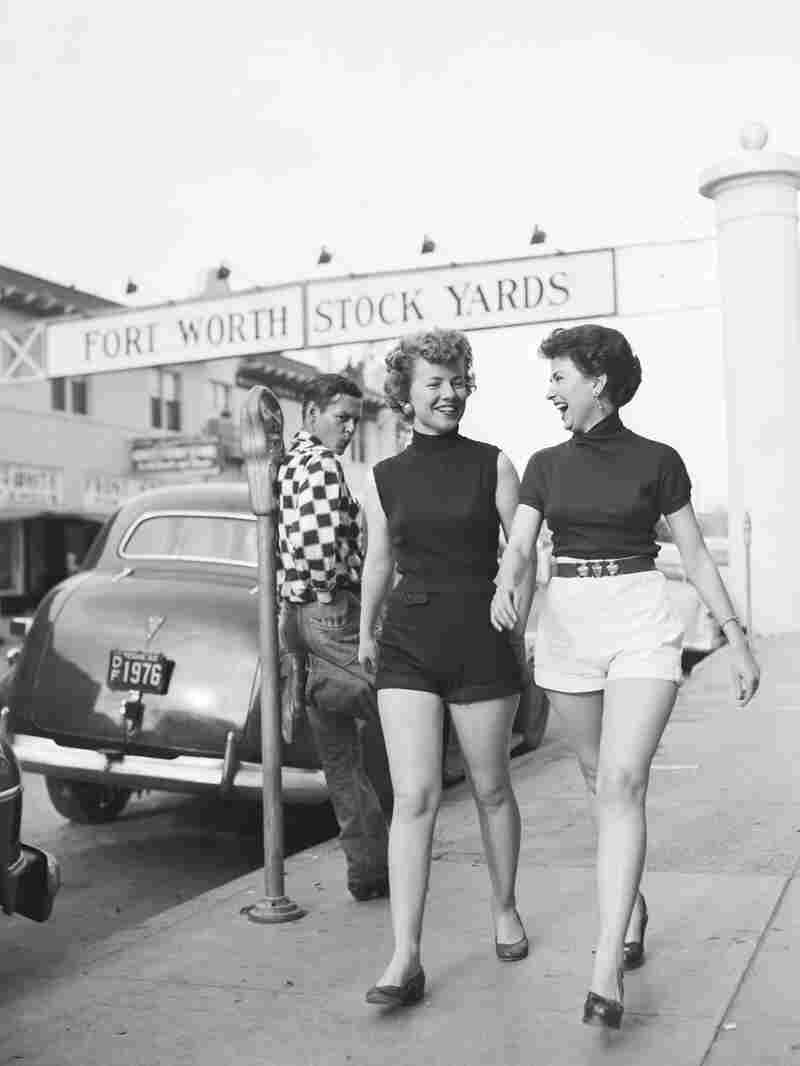 Two women in shorts — and a whistling bystander --amid a propriety debate in Fort Worth, Texas, 1952. Bettmann/Corbis hide caption 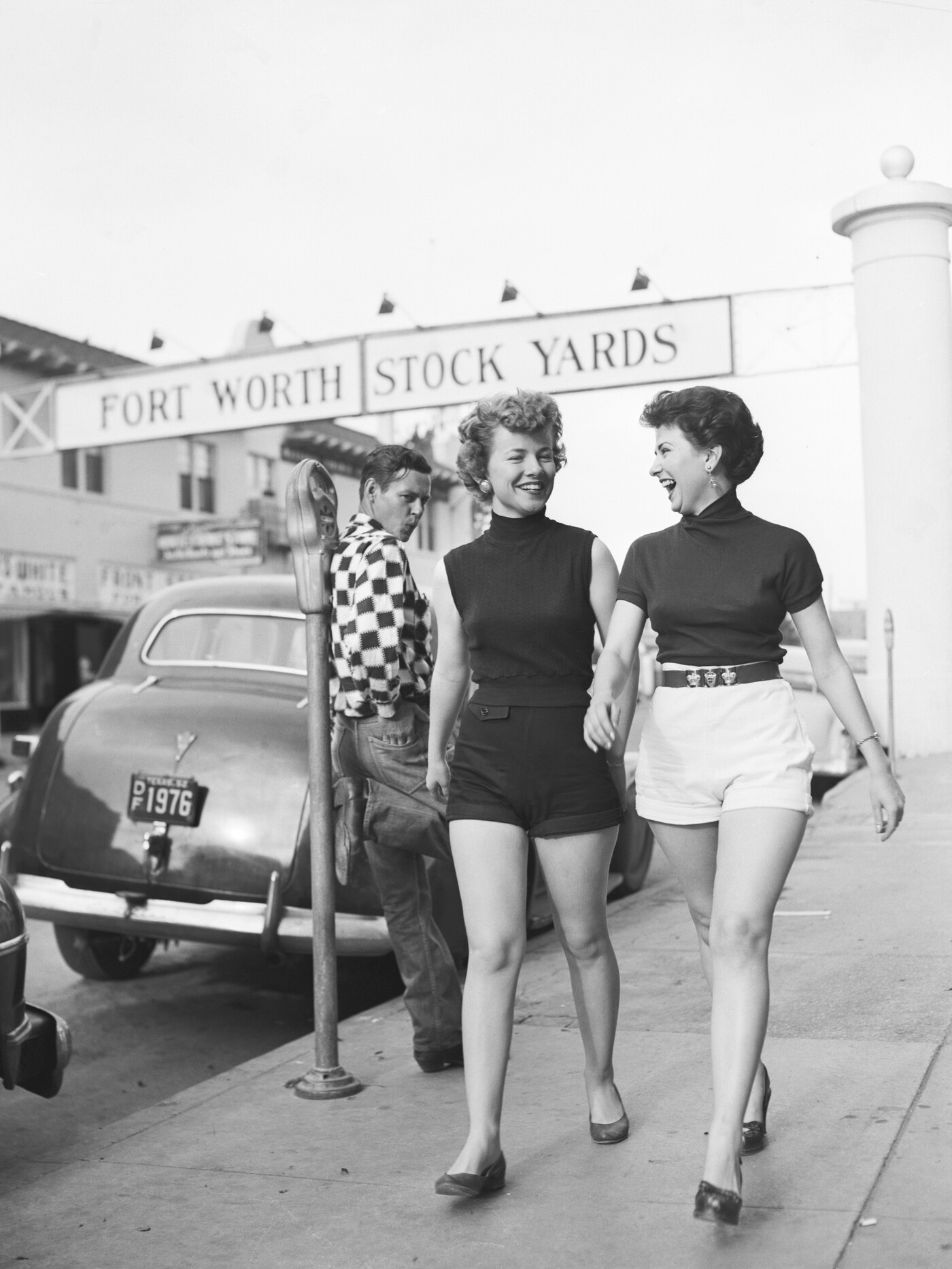 Two women in shorts — and a whistling bystander --amid a propriety debate in Fort Worth, Texas, 1952.

Sometimes, though, American stubbornness — and sense of humor — have thwarted attempts to enforce dress codes. In the spring of 1952, the Fort Worth City Council received a letter from a concerned citizen, the United Press reported. The council's brief consideration of banning shorts had made national news. When a person wears shorts, the alarmed woman wrote, it is "an advertisement for adultery."

The woman told the council she was a "decent lady" who resented having to look at the "ugly legs" of men and women in shorts. Exposed gams, she added, were a "disgrace to humanity."

One city legislator quipped that the matter seemed like a "legacy for the legal department." But the mayor took the complaint more seriously and asked the city manager to investigate a possible ban.

Cultural taboos can claim an ethical rationale, Lee says, But in reality such prohibitions "are often related to gender, class and ethnicity."

Talk about a cover-up.