Accessibility links
When America Was Crazy About Rock Gardens : NPR History Dept. During these times of drastic drought in the American West, maybe we should take a hint from the early 20th century — and plant rock gardens.

When America Was Crazy About Rock Gardens

When America Was Crazy About Rock Gardens 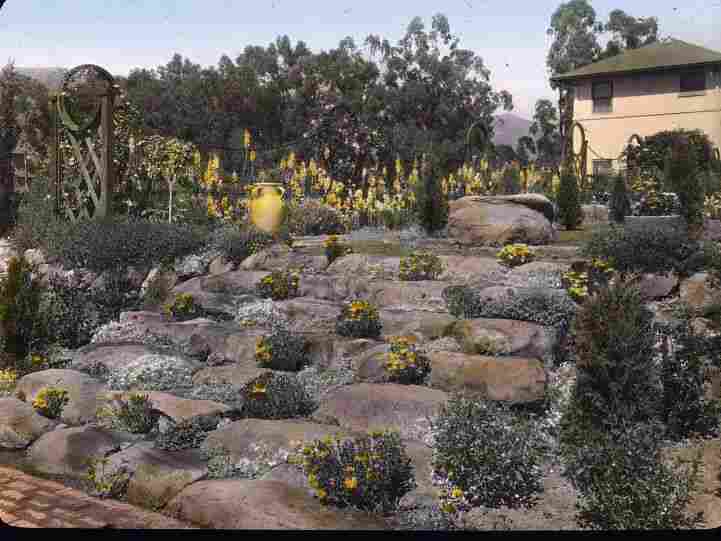 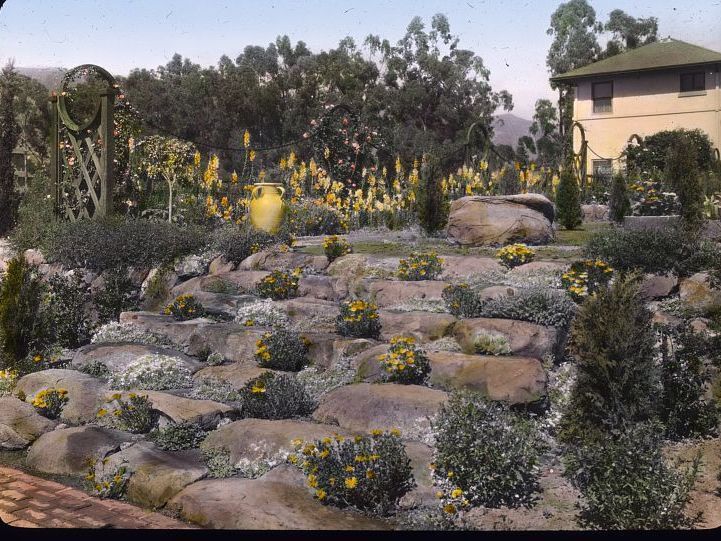 A rock garden at Casa de Mariposa in Montecito, Calif., 1917.

In the American West, water is so alarmingly scarce these days that California has imposed restrictions and, as the Sacramento Bee reports, landscapers are planting desert plants and rock gardens.

The dryness may be unprecedented, but planting rock gardens is not. In fact, in early 20th century America, rock gardens were all the rage.

Across the country, Americans competed to create the coolest rockery in the neighborhood. People in some states sold rocks to people in other states. People bought rocks for their size and color. It was neighbor against neighbor, with backyards as battlegrounds. Folks were rocking the suburbs.

"My earliest memory of a rock garden was when I was a little girl at my grandmother's house on a slope that was not able to be mowed near her front walkway," says Linda Antonacio-Hoade of the Penn State College of Agricultural Sciences extension services. "It had beautiful rocks and plants with a color palette that played off the rocks. It was low maintenance and upkeep." The Penn State Extension offers suggestions for fashioning your own rock garden.

Antonacio-Hoade believes that this was the reason rock gardens were so popular in the early 20th century. "When you think about the lack of modern conveniences," she says, "folks had many other things that needed to be done in order to live ... and garden maintenance was not high on the list."

Now, garden maintenance is once again difficult for Americans living in dry places.

Rock gardens make sense everywhere — not just in water-starved climes, Antonacio-Hoade says. "The reason lawns are discouraged in drought areas is that they are a mono culture and take a lot of fertilizer and water to keep them looking pristine."

The rock garden craze reached frenzy level in the 1930s. As people rocked their gardens, dispatches came in from all over. Here is a sampling from 1931:

Some people took it to the extreme. The built-in-the-1930s Hartman Rock Garden in Springfield. Ohio, for example, is a work of folk art fashioned from thousands and thousands of stones — with more than 50 structures and figurines.

Rock gardens were the rage in another way, too. One reason that Adam left Eden, railed one Ohio editorial writer in the June 6, 1931, Wilmington News-Journal in Ohio, "was that Eve wanted him to make a rock garden."

He suggested that everyone band together and "establish a sort of Devils Island for people who make rock gardens and send all offenders there, giving them boulders and stink weed and daisies to work with until they are entirely cured."

Not exactly a Nostradamus, the editorial writer predicted that the rock garden fad would "run itself out by 1934."

In fact, he added, "I shouldn't be surprised to see its career cut as short as that of infantile golf."

Golf is still around. And soon we may see a resurgence of rock-garden mania. Despite the editorial writer's, shall we say, dry wit.