Accessibility links
Nazi Summer Camps In 1930s America? : NPR History Dept. In the 1930s, the Nazi movement was on the rise in Europe — and at summer camps for kids in the United States. 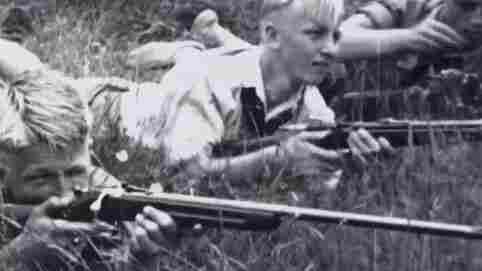 To the unsuspecting observer, the 25-minute silent, grainy black and white video from the vaults of the U.S. National Archives seems to showcase a quaint, carefree summer camp for boys in 1937.

Volks-Deutsche/Jungen in USA, video of a Bund-sponsored camp near Windham, N.Y. from the National Archives — filmed in the summer of 1937.

In the 1930s, while Adolf Hitler was inciting the German people toward bellicosity and Nazis were establishing horrific concentration camps around Germany, Nazi summer camps for youngsters — like the one near Windham, N.Y., featured in the clip — popped up around this country. The pro-Hitler retreats were sponsored by German loyalists, such as the German-American Bund led by Fritz Kuhn.

The Bund, "which came to include more than 70 local chapters," according to a 2014 National Archives blog post, "was founded in 1936 to promote Germany and the Nazi party in America. The most well-known of the organization's activities was the 1939 pro-Nazi rally held at Madison Square Garden that drew a reported 20,000 attendees." 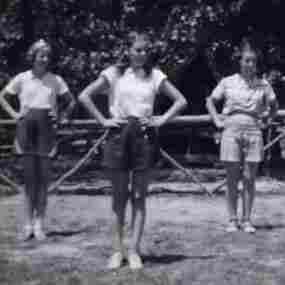 This was the same year that Hitler staged military strategy sessions with top Nazi leaders. And declared war on Poland — and decided to battle Britain and France, if necessary.

Documentary film of the Nazi summer camps in America, the Archives post continues, "complete with the official uniforms and banners of the Hitler Youth, might be the most visual and chilling example of the [Bund's] attempts to instill Nazi sympathies in German-American children."

A handful of summertime sanctuaries — for boys and girls — received campers. Camp Will And Might in Griggstown, N.J., for instance, hosted 200 German-American boys between the ages of 8 and 18 — and hoisted the Nazi flag — in the summer of 1934, the Altoona, Pa., Tribune reported on Aug. 13.

Camp Activities of Boys and Girls, video of Bund-sponsored programs from the National Archives — compiled in the late 1930s.

And Camp Hindenburg in Grafton, Wis. — near Milwaukee — was another site of Nazi youth and family camps. "Children dressed in Nazi uniforms and drilled military-style, with marching, inspections, and flag-raising ceremonies," Mark D. Van Ells of City University of New York posted on America in WWII. "Although the Bund denied it, children were taught Nazi ideology."

Arnie Bernstein, author of the 2013 book Swastika Nation: Fritz Kuhn and the Rise and Fall of the German American Bund, estimates the Bund membership at its zenith ranged between 5,000 and 25,000 — though the Bund claimed a much larger enrollment

"The majority of the campers were children or grandchildren of German immigrants and naturalized American citizens who were part of the Bund," Bernstein says. 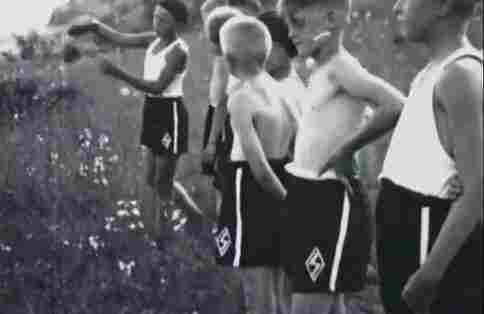 On the surface, these enterprises offered standard summer-camp fare. "But their real purpose," Bernstein says, "was to indoctrinate and raise children to be good Aryans loyal to the Bund, its leader Kuhn, and of course Hitler. They would march about in their uniforms carrying American and Bund flags, singing German songs. Uniforms were modeled on Hitler Youth uniforms."

Bernstein says, "There were forced marches in the middle of the night to bonfires where the kids would sing the Nazi national anthem and shout 'Sieg Heil.' Nazi propaganda was plentiful at these camps as well."

Superficially sunny, the camps presented situations for dark behavior, Bernstein says. The attendees were exploited by the Bund, both for physical labor and for physical abuse. He says, "This all came out in congressional hearings."

The camps "more or less died out as the Bund came to its wheezing end with Fritz Kuhn's imprisonment in 1939," Bernstein explains. "With the strong central leader in prison for forgery and embezzlement, members started leaving the Bund and taking their kids with them."

By 1940, he adds, the Bund was moribund "and with that, the camps suffered significant drops in attendance and activities." Plus, the programs came under intense government scrutiny and were raided.

"So realistically, they ended in 1940," Bernstein adds. "The Bund sputtered along into 1941, but by then was whittled down to only hard-core loyalists. The Bund itself was officially disbanded days after the bombing of Pearl Harbor and Germany's declaration of war against the United States."

Some of the camps were converted to different uses; others fell into ruins. Bill Maloney, who lives in Wayne, N.J., has visited — and taken photos that are posted on his website — of nearby Camp Bergwald. Asked how he felt when he saw the overgrown site, he says, "Puzzlement and discomfort that a Hitler Youth camp could be in any way acceptable in the U.S., even before the war. It is especially disturbing that it is so close to home and that the people involved would have been our neighbors. Maybe some still are. The site is only 3 miles from where I live."

As for what happened to the campers, who knows? One of the adult leaders at a New York camp, Gustav Wilhelm Kaercher, worked as a power-plant designer for a utility company in New York City. He was arrested by the FBI in 1942 — for being a German spy.