Accessibility links
A Forgotten Tradition: May Basket Day : NPR History Dept. For at least a century or so, April flowers led to showers of May baskets on the front-door knobs of American homes.

A Forgotten Tradition: May Basket Day

A Forgotten Tradition: May Basket Day 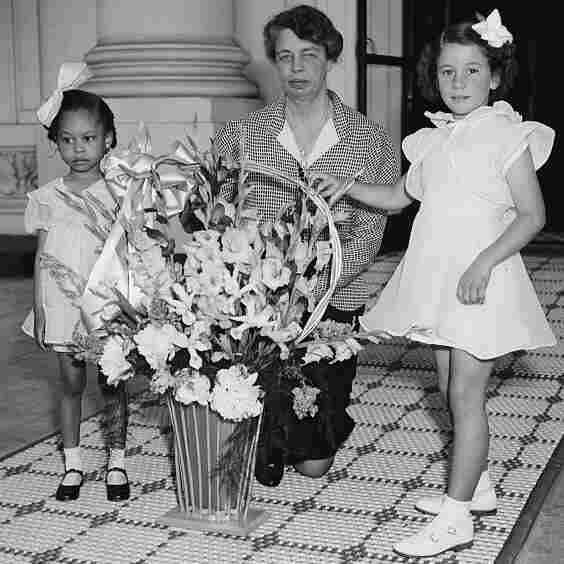 First lady Eleanor Roosevelt receives a May basket of flowers from young children in 1938. Library of Congress hide caption 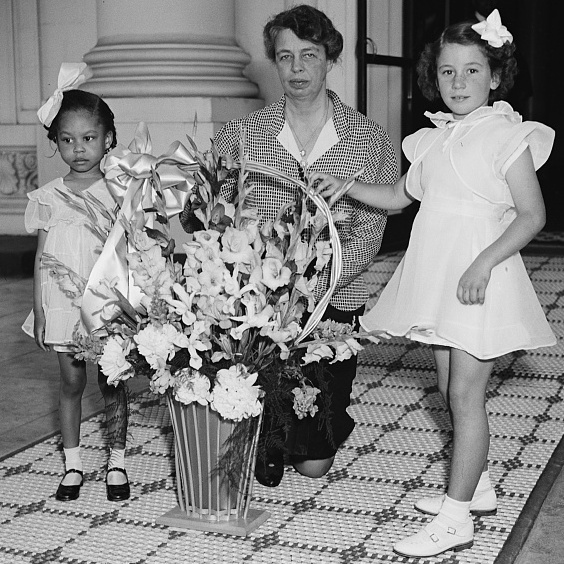 First lady Eleanor Roosevelt receives a May basket of flowers from young children in 1938.

Maybe there really was a time when America was more innocent.

Back when May Basket Day was a thing, perhaps.

The curious custom — still practiced in discrete pockets of the country — went something like this: As the month of April rolled to an end, people would begin gathering flowers and candies and other goodies to put in May baskets to hang on the doors of friends, neighbors and loved ones on May 1.

In some communities, hanging a May basket on someone's door was a chance to express romantic interest. If a basket-hanger was espied by the recipient, the recipient would give chase and try to steal a kiss from the basket-hanger. 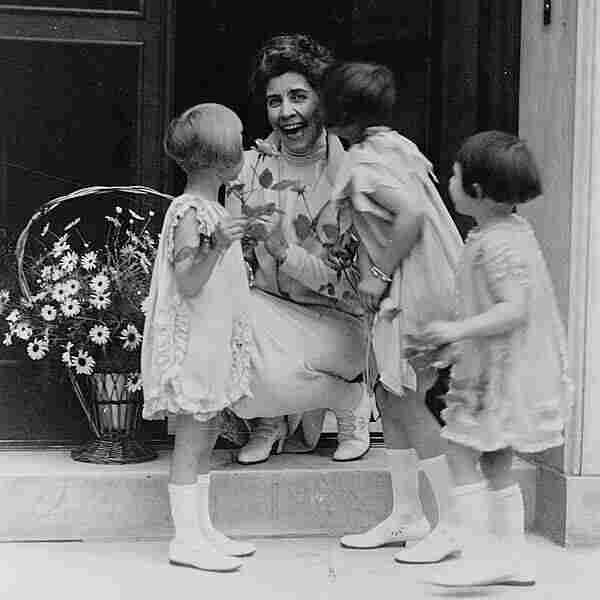 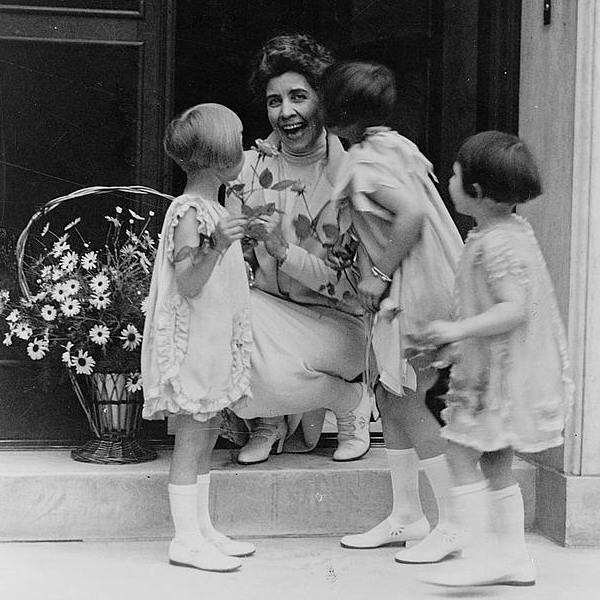 First lady Grace Coolidge receives a May basket from young children in 1927.

Perhaps considered quaint now, in decades past May Basket Day — like the ancient act of dancing around the maypole — was a widespread rite of spring in the United States.

Through the 19th and 20th centuries, May Basket Day celebrations took place all across the nation:

A reporter in the Sterling, Ill., Gazette in 1871 explained the seasonal ritual this way: "A May-basket is — well, I hardly know how to describe it; but 'tis something to be hung on a door. Made of paper generally, it contains almost anything, by way of small presents you have in mind to put in it, together with your respects, best wishes — love, perhaps. It is hung after dark at the door of anybody the hanger fancies. — Which done, the said hanger knocks and scampers."

The writer went on to say, in the spirit of the times, that if a boy hangs a May basket on a girl's door and the girl catches him, "it's a great disgrace." If a girl is the hanger, "it disgraces the boy again not to catch her."

In St. Joseph, Mich., the Herald reported on May 6, 1886, "little folks observed May Basket Day custom in hanging pretty baskets to door knobs."

The Taunton, Mass., Gazette in May 1889 told the story of a young man who got up very early and walked a mile and a half to hang a basket on his sweetheart's door, only to find another basket from another beau already hanging there.

"With the young, in rural communities especially," the St. Louis Republic reported on May 1, 1900 — in archaicspeak, "it is May Basket Day — when the youthful fancy manifests its turn to thoughts of love by surreptitiously leaving baskets of spring flowers on the stoop appertaining to the home of the one adored."

Two bold children hung May baskets on the White House front door on May Day 1925. The Indiana, Pa., Gazette reported that first lady Grace Coolidge found her admirers and gave them flowers she had picked.

In Dunkirk, N.Y., the Evening Observer observed on April 30, 1932, that young people were collecting samples from wallpaper dealers and "creating baskets of all sorts and varieties as to size, shape, and color, and will hang them on the doors of their friends at dusk on May Day."

Writing in the Humboldt, Iowa, Independent in May 1976, the local extension home economist reminisced: "What a gallant occasion Mother made of May baskets. Lists were made and rewritten. It became almost as exciting as Christmas." Her family used old milk cartons for containers and they made popcorn and Boston cremes for each basket. People in her community returned May baskets to their owners at Halloween. 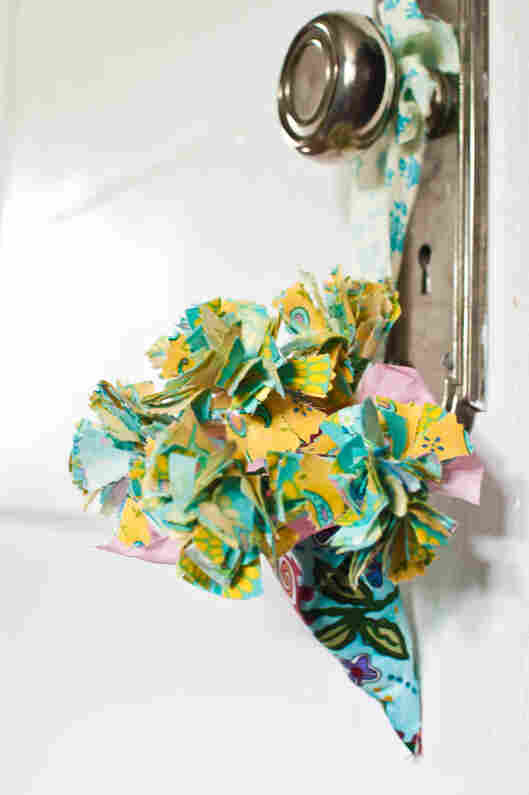 Here and there you can find recollections of May Basket Days past. Marci Matson, director of the historical society in Edina, Minn., writes: "The practice has a long history, stemming from the European pagan festival of spring, Beltane. The more raucous elements were toned down after the continent became Christianized, but the May pole dance and May baskets survived in a more G-rated form."

She points to other reminiscences: Joan Gage in A Rolling Crone remembers making baskets as a child in Milwaukee and leaving them for old folks in the neighborhood, just for the kindness of it.

And Old Fashioned Living recalls that Louisa May Alcott wrote about May Basket Day in New England in her 1880 children's book Jack and Jill.

From Alcott's story: "Such a twanging of bells and rapping of knockers; such a scampering of feet in the dark; such droll collisions as boys came racing round corners, or girls ran into one another's arms as they crept up and down steps on the sly; such laughing, whistling, flying about of flowers and friendly feeling—it was almost a pity that May-day did not come oftener."

Eventually, May Basket Day — like the spring flowers arranged in the baskets — began to wilt and droop. Though vestiges of the sincere ceremony still pop up on the Internet, the in-real-life event has pretty much evanesced.

Observing May Day traditions on May 1, 1963, an Associated Press reporter in Providence, R.I., wrote that there were only a "few May baskets hanging from door knobs" that year.

"Remember May Basket Day?" a syndicated columnist asked in the spring of 1963.

So what happened? Maybe the ritual receded because of a national fall from innocence. Or an increased desire for get-off-my-lawn privacy. Maybe modern innovation overwhelmed the May basket tradition: A household-hint adviser suggested "May Baskets from plastic bottles" in the Belleville, Kan., Telescope in 1976.

Whatever the case, Madonna Dries Christensen, a writer in Florida, is not totally sure she wants the habitual ritual to flourish again. "I harbor a fear that some major company will rediscover May Basket Day and mar its simplicity with commercial baskets, cards and trinkets," she writes in her 2012 memoir, In Her Shoes: Step By Step. "To ward off that calamity, please do not share this ... with anyone who might be in cahoots with such a manufacturer."