Accessibility links
The Windshield-Pitting Mystery Of 1954 : NPR History Dept. For some strange reason, people across America began to notice that thousands of automobile windshields were dotted with teeny-tiny pockmarks. 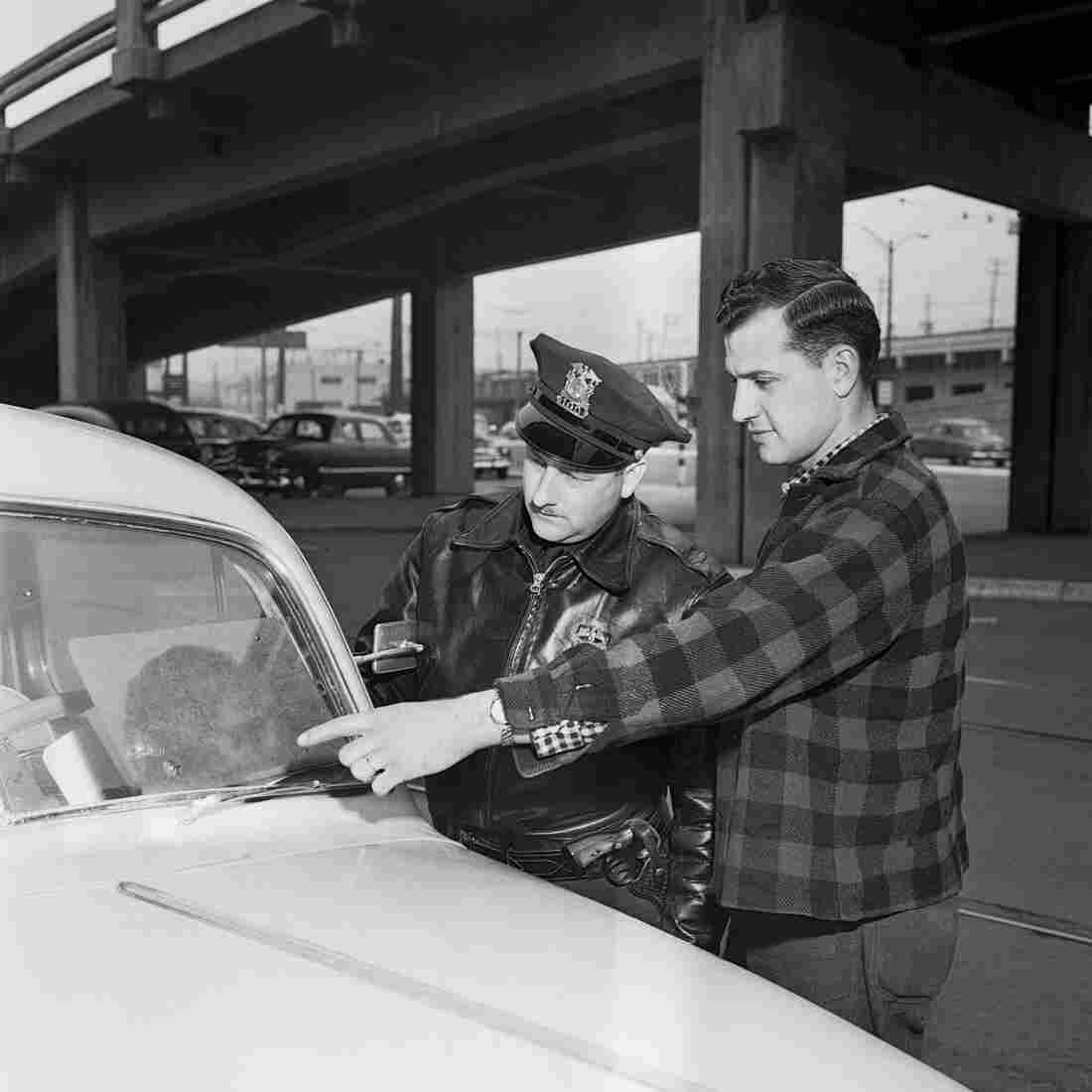 A man shows his pitted windshield to a police officer in Seattle in 1954 Museum of History & Industry, Seattle Post- Intelligencer Collection, 1986.5.571.1 hide caption 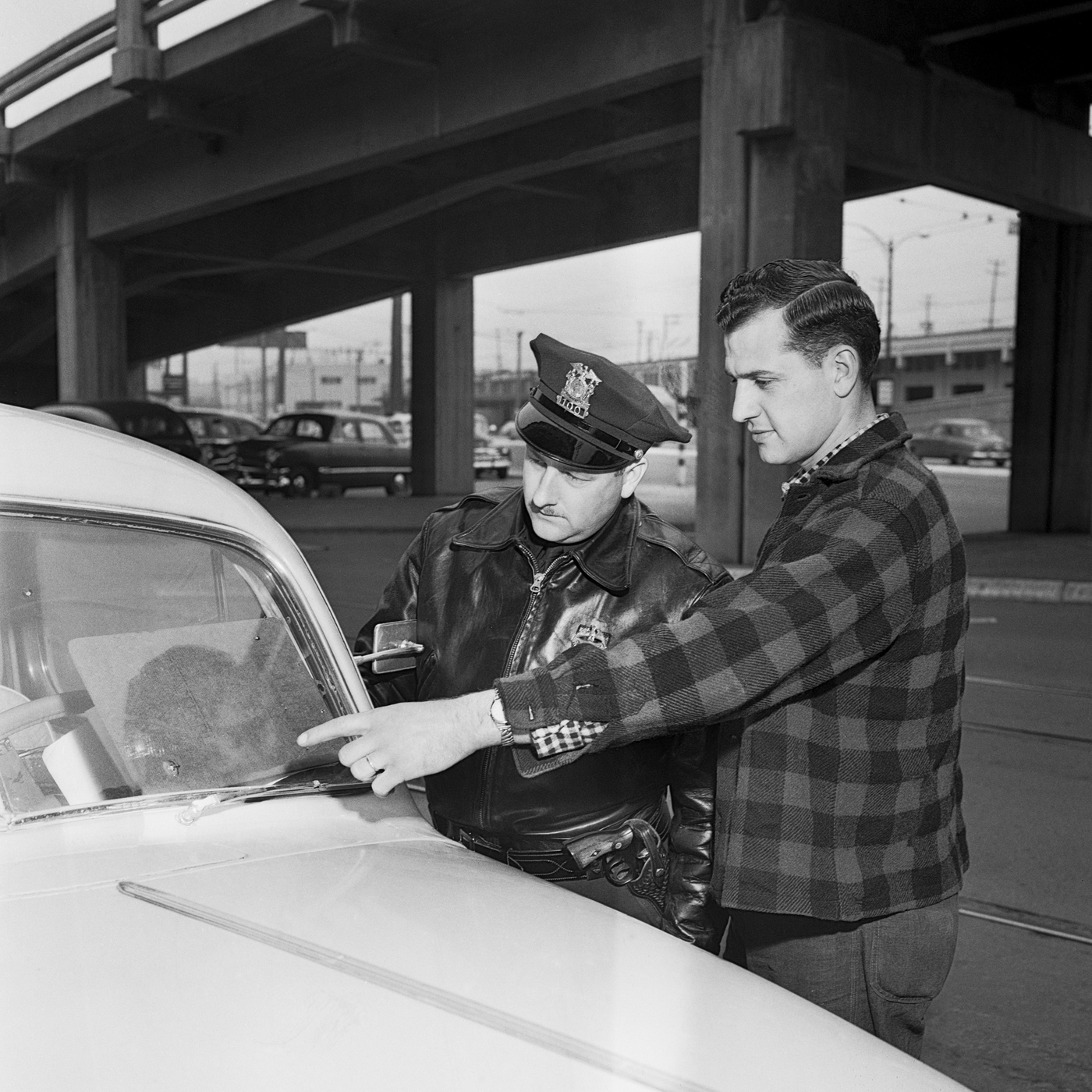 The nationwide weirdness that was the Windshield-Pitting Mystery began in the spring of 1954. Looking back at the events today may give us a window — OK, a windshield — on the makeup and the mindset of mid-20th-century America.

The epidemic's epicenter, according to HistoryLink — an online compendium of Washington state history — was the town of Bellingham, where "tiny holes, pits, and dings ... seemingly appeared in the windshields of cars at an unprecedented rate" in late March.

"Panicked residents," the website reports, suspected "everything from cosmic rays to sand-flea eggs to fallout from H-bomb tests."

In his Introduction to Collective Behavior and Collective Action, David L. Miller writes that "the testing of nuclear weapons and the threat of nuclear war" have been viewed as one source of the anxiety. The Huffington Post later called it "mass hysteria."

The glass-pocking was soon noted in other Washington communities, including Anacortes and Oak Harbor. In mid-April 1954, the strange wave of windshield-dinging reportedly swept through the city of Seattle.

The governor of Washington, a team of university scientists and even President Dwight D. Eisenhower were notified of the mass mystery.

The Pits And The Pendulum

After all, America has been host to all three phenomena.

Historically, mass hysteria in this country is often associated with the 17th century witch trials in Salem, Mass. In the mid-19th century, graveyard vandalism was prevalent in communities from Pennsylvania to Tennessee to Ohio. And in the 1960s, children all over the country were warned not to eat snow because of possible radiation from nuclear tests.

In Washington state, law enforcement officials scrutinized the windshields of 15,000 cars during the 1954 episode and, according to HistoryLink, discovered that more than 3,000 had been damaged.

Upon investigation, law enforcement officials ruled out vandalism and radioactive fallout. A representative of Seattle's police crime laboratory, according to HistoryLink, "declared that all of the damage reports were composed of '5 per cent hoodlum-ism, and 95 per cent public hysteria.' Puget Sound residents had unwittingly become participants in a textbook example of collective delusion. By April 17, 1954, pitting incidents abruptly ceased."

No Pocks On Any Houses

Sightings waned in Washington. But — despite Seattle receiving most of the attention — reports continued to come in from around the country.

As International News Service noted on April 19, 1954, pitted windshields were reported in at least nine states and Canada, all told. Residents of California, Illinois, Indiana, Kentucky, Michigan, Ohio, Oregon and Wisconsin — as well as Washington — told authorities about mysterious marks on their car windshields. In Mount Pleasant, Mich., pockmarks were found on the glass panes of greenhouses. In other places, airplane cockpit glass appeared to be affected.

"Anywhere from 10 to 20 blue-edged pits first appear in the glass, although as many as 50 'craters' may be discernible later," the reporter observed. "The tiny holes do not pierce the glass, but pit depth of 1/16th of an inch have been reported."

Curiously, no pitting occurred on windows of homes, side windows of cars or other vertically positioned glass. "This led one observer to believe that whatever is causing the pitting," the INS reported, "is coming straight down from the sky at probably a high altitude."

In Canton, Ohio, some 1,000 residents notified police that their windshields had been "blemished in a mysterious manner," the Daily Mail of Hagerstown, Md., reported on April 17. And United Press in New York noted on April 20 that "new reports of mysterious windshield pittings came in today almost as fast as theories about what causes them." A Canadian scientist posited that the marks were made by the skeletons of minute marine creatures that had been propelled into the air by hydrogen bomb testing in the Pacific Ocean.

In Utah, someone suggested that acid from flying bugs might be the source of the windshield-denting, but a Brigham Young University biologist disproved the theory, the Provo Daily Herald reported on June 27.

As summer rolled on, reports of pitting decreased everywhere and the country moved on to building backyard fallout shelters.

But the question remains: What about those pitted windshields?

The Pitfalls Of Media

For guidance, we turn to Missouri State University sociologist David Rohall, who has taught courses in social movements and collective behavior for more than a decade.

What was the cause of the windshield-pitting in Seattle and other places?

"Much of what happens in society is a numbers game," Rohall says. "If you have more people, any phenomenon starts to appear more common if you focus on any one event or behavior."

Even something that is very infrequent may start to appear to be a trend, he says, "when you aggregate those events. There are millions of cars in Washington state but thousands of cases of pitting. While thousands sounds like a huge phenomenon, it represents less than 1 percent of cars. If everyone is looking for and reporting it, it would appear to be a conspiracy of some sort."

Since there was physical evidence of windshield-pocking, did that put the incidents in a different category from other invisible phenomena that have triggered collective behavior?

Windshield-pitting, Rohall says, "may be more like crop circles in which there is physical evidence that 'something' happened but no one is certain of the cause. Of course, we have since found evidence that, in some cases, people utilize special equipment to make those crop circles. The cause of the pitting is different because it would be very difficult to capture someone creating them."

Is America still susceptible to a kind of mass hysteria that would lead to similar events?

"Most people in the field no longer believe in mass hysteria as a cause of large-group behavior," Rohall says. "The idea came from Gustave Le Bon, a French theorist trying to explain the strange behavior of large groups during the French Revolution, in which average citizens began killing large numbers of people via the guillotine. What would cause them to do such a heinous thing?"

Even if the theory were true, Rohall says, "it is designed to be applied to situations of heightened emotional arousal — for example: large crowds. While the ideas about pitting may have 'caught on' among people in the region, I doubt it was an emotional contagion that drove them to act in a particular way."

So what was it, exactly, that caused large numbers of people to report pocked windshields?

"War of the Worlds is a wonderful example of how the media emphasizes the few 'real cases' of hysteria without recognizing that the vast majority of people knew that the radio program was fictional and did nothing," Rohall adds. "Like crop circles, we know that some of them are man-made, so might these pits. However, the media may have had people start noticing the pits that had already been there."

He likens the experience to this: "It is very common for people to believe that they have contracted an illness when they hear a doctor describe a medical problem and the symptoms associated with that problem. I suspect that most people already had these pits all along and only attributed it to the mysterious cause when they heard other people doing it. Still others may have resulted from vandalism or new cases from simple accidents — debris from the roads. Is this hysteria or simply logical thinking utilizing information from the media and their own situation — a pitted car? Some research about supposed 'hysteria' really shows that people are not hysterical at all."