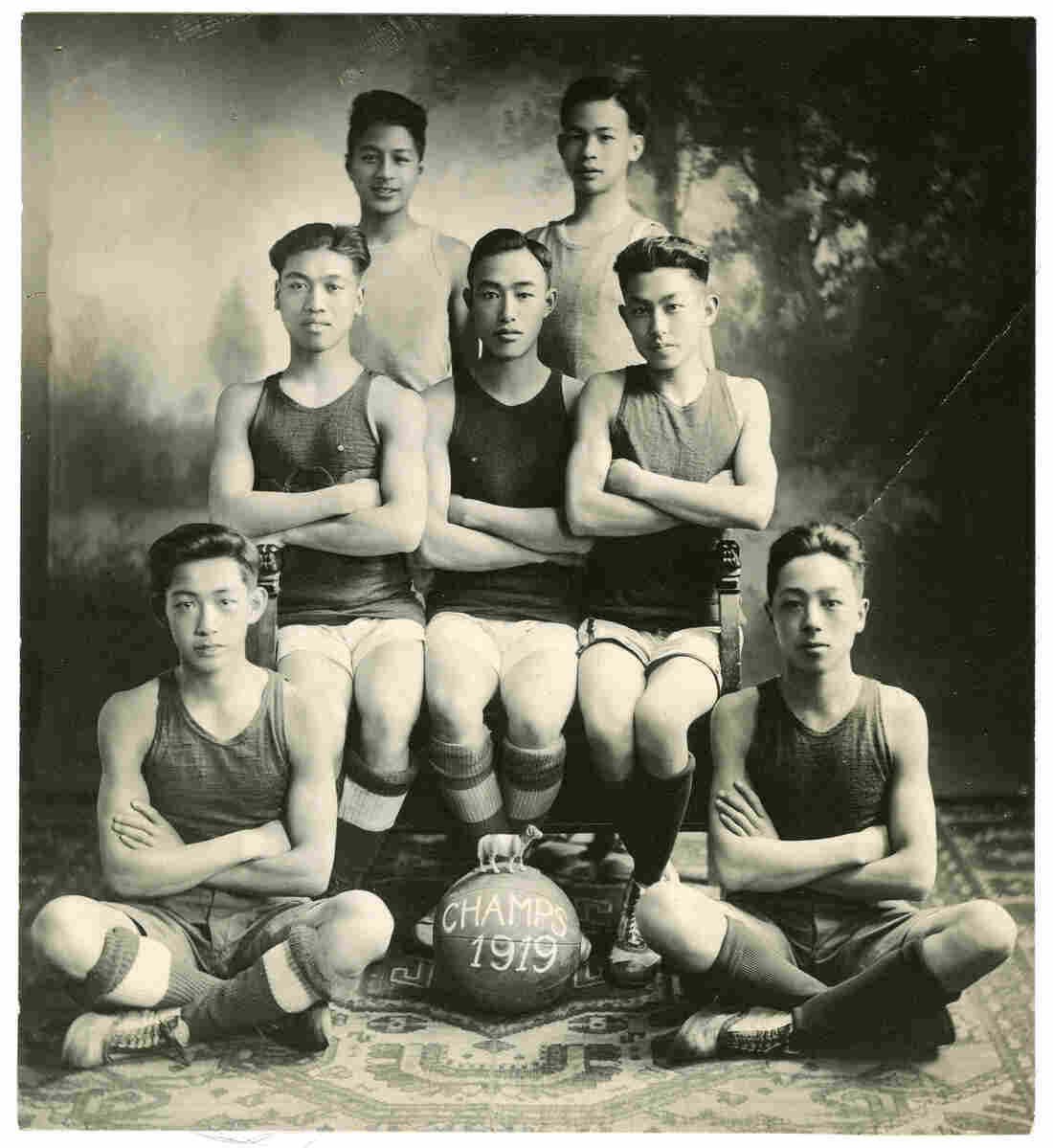 A Chinese basketball team from the YMCA in San Francisco, 1919. Courtesy of the Kautz Family YMCA Archives, University of Minnesota Libraries. hide caption 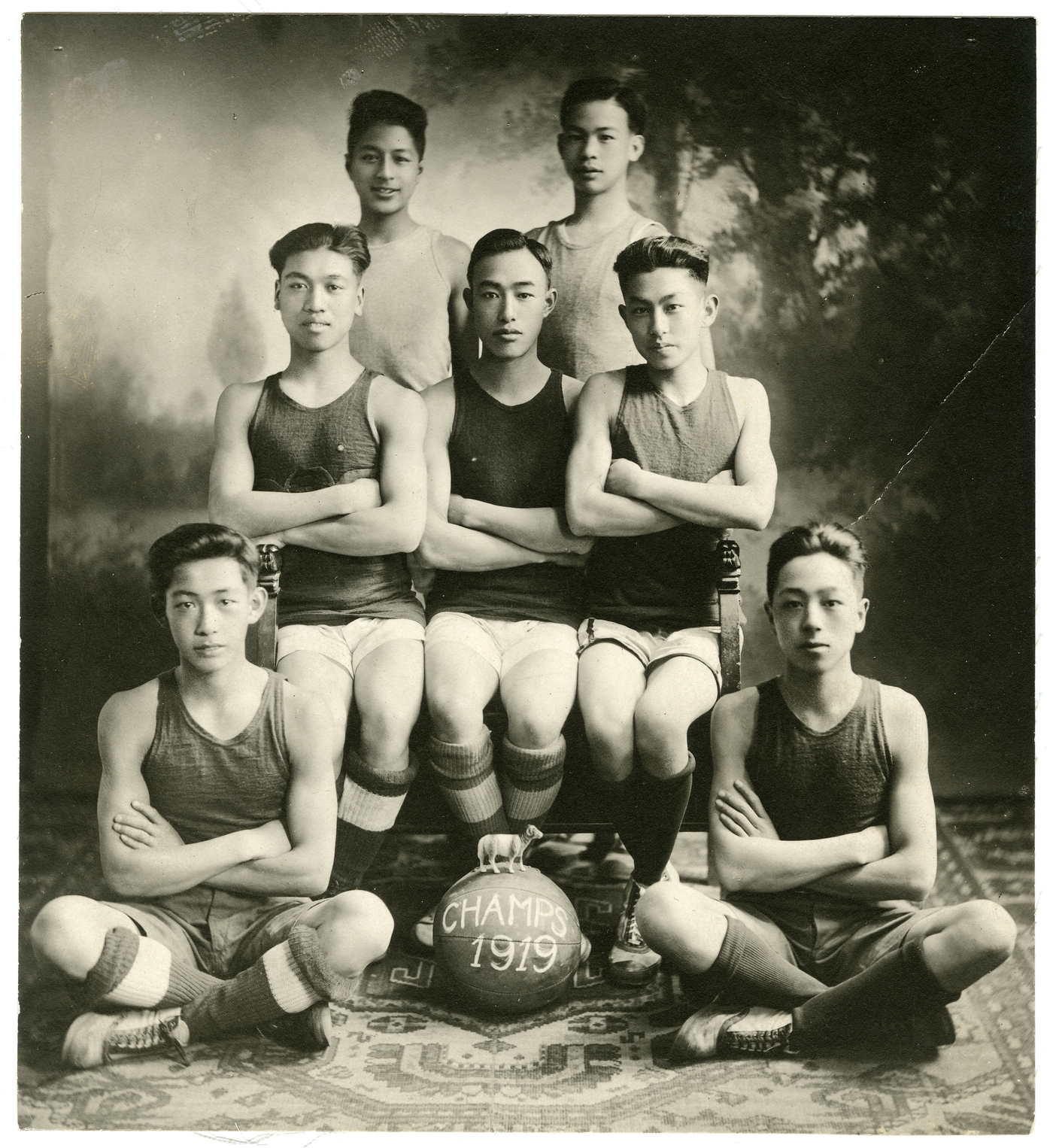 A Chinese basketball team from the YMCA in San Francisco, 1919.

When thinking about Chinese basketball players in early 20th-century America, keep in mind these two events:

But even under times of social exclusion and discrimination, Chinese basketball players found ways to get on the court.

"Basketball offered small moments of liberation to Chinese and Chinese-American workers who toiled long hours in harsh labor conditions," says Kathleen Yep, head of the Intercollegiate Department of Asian American Studies at the Claremont Colleges and author of the 2009 sports history Outside the Paint: When Basketball Ruled at the Chinese Playground.

Chinese athletes, Yep says, adapted to the fluid aspects of the newly invented game — such as fast breaks, steals and the give-and-go. Against the backdrop of official discrimination and unofficial stereotyping, she says, some Chinese players found that "success on the basketball court provided a temporary and discursive space of empowerment through the collective movement of bodies."

Newspaper reports of Chinese basketball teams in Wichita, Kan., Cleveland and other American towns began appearing around 1913. In the 2010 book Crossing Sidelines, Crossing Cultures, Joel S. Franks traces the origins of Chinese basketball in California — a hotbed of basketball activity — back to 1916, at least, when Chinese-American student teams were organized at the University of California and Stanford University.

Franks cites sportswriter Frank Hee of the Chinese Digest who reported in 1939 that "the Chinese in America have been growing in leaps and bounds toward the betterment of sports and this is especially so in basketball." Hee said Chinese-Americans had been playing basketball at least since the Chinatown Boy Scout troop fielded a team in 1919.

As the century's shot clock ticked away, Chinese basketball players continued to find new challenges. In the late 1920s, Franks writes, the Waku Auxiliary in Oakland, Calif., put together a female Chinese-American basketball team. The group played other Chinese-American girls in San Francisco and around Northern California.

And in Los Angeles during the 1930s, Chinese-Americans of both sexes played and supported basketball. The Lowa male squad, Franks writes, "was apparently one of the best amateur teams in Southern California outside of the college game." In 1937, the Lowa team played a group from Whittier's Chamber of Commerce in the Southern California Open Tournament championship game. The Los Angeles Times described the Lowa team, packed with players over 6 feet tall and "sufficiently skilled to beat formidable opponents with college performers."

George Tong, Franks writes, "was a team leader. Called a scintillating center, the Times could not understand why he was not good enough to try out for the USC [University of Southern California] basketball team when he was an undergraduate there." Teams of Chinese-Americans played in communities up and down the West Coast, including Sacramento, San Jose and Portland.

Why Aren't Asian-Americans Getting Their 'One Shining Moment'?

Basketball And Race: How Stereotypes Explain Everything And Nothing At All

Sporting activities such as basketball, Franks says, "helped reinforce a sense of community among Chinese-Americans. It also provided a vehicle through which they could interact with non-Chinese, non-Asian Americans on school teams when, in general, they faced racial segregation on the mainland of the U.S."

Chinese teams sprang up in other parts of the country, as well. Franks tells NPR of an all-female team, "organized in part by Amelia Earhart, out of a Boston settlement house in the late 1920s."

And the Chinese players continued to expand horizons in the '30s and '40s, says Kathleen Yep. The Hong Wah Kues — a professional barnstorming team — "competed against teams like the Harlem Globetrotters all over the United States."

Many Chinese players starred on college teams. And Yep says that collegiate standout Willie Wong, known as "Woo Woo", became "the first Chinese to play at Madison Square Garden in the late 1940s."

The tradition continues today with basketball teams in Chinatowns here and there, such as the Philadelphia Suns in Pennsylvania.

Sport is often held up as an ideal of meritocracy and democracy where participants — regardless of race, gender, class or ability — can succeed if they work and play hard, says Yep. "The racial formations of white supremacy — Jim Crow and blackness, Indian removal and Native American-ness and the Exclusion era and Chinese-ness of the early 20th centuries — seeped into and shaped civil society such as sport."

As a result, she says, summing up: "The 'successes' by marginalized populations, such as the Chinese-Americans, and how they strategically used sport to mediate the prevailing ideologies and material conditions that subordinated them, is compelling because it is a different form of mobilization and empowerment than what are usually analyzed — such as union organizing, labor strikes, voter registration campaign, lawsuits and the like."

Oh, and Yep also has a personal stake in the history of Chinese basketball players in America. Her grandmother, Franche Yep, once played for the Mei Wahs out of the Chinese Playground in San Francisco Chinatown. Franche Yep will be turning 100 in a few days, and she is cheering for the Golden State Warriors in the 2015 NBA Final.