When 'Womanless Weddings' Were Trendy

When 'Womanless Weddings' Were Trendy 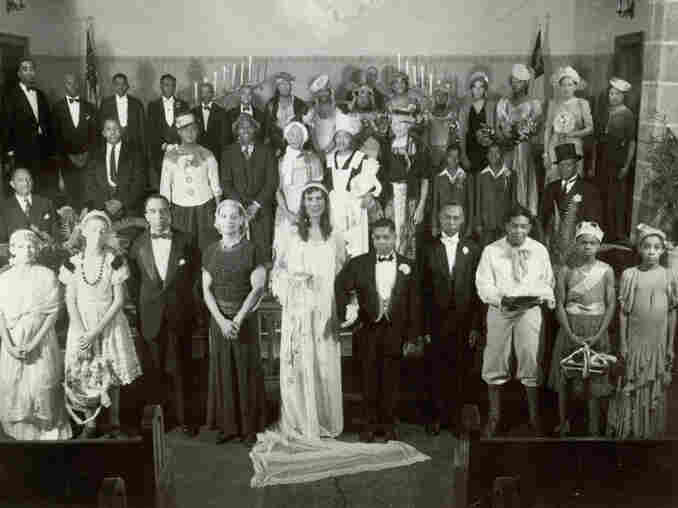 Womanless weddings, like this one in a Methodist Church in Cincinnati, Ohio, often included prominent members of the community. Alongside the bride, with hands clasped, is Theodore M. Berry, the first African-American mayor of the city. Theodore M. Berry Papers, Archives & Rare Books Library, University of Cincinnati hide caption 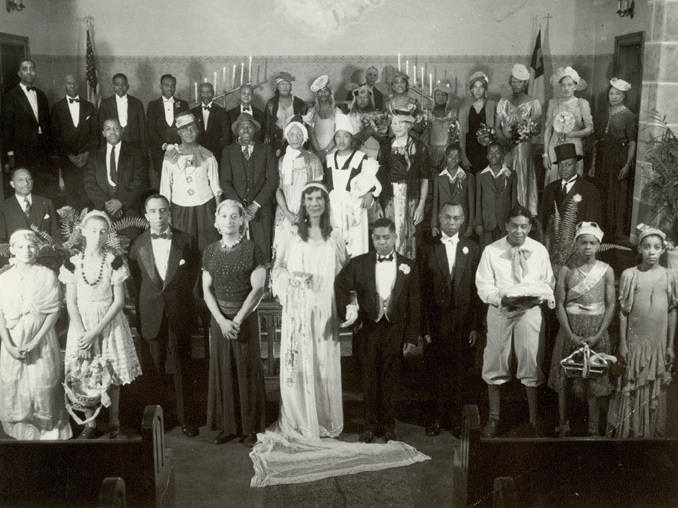 Womanless weddings, like this one in a Methodist Church in Cincinnati, Ohio, often included prominent members of the community. Alongside the bride, with hands clasped, is Theodore M. Berry, the first African-American mayor of the city.

The flowery month of June and the whiff of wedlock is in the air.

Definitions of marriage in America keep expanding, but for most of the country's history, the word "wedding" has called to mind images of a woman in a white dress and a man in a black tuxedo. And traditionally, June was the most popular month to get hitched.

So, there's no better time to reminisce about a once-popular community ritual — still perhaps practiced occasionally — that would seem to be on the edge of extinction: the womanless wedding.

Pore over photos of womanless weddings of the past, and you will usually see men in gowns and dresses playing the roles of everyone in a wedding party — including bridesmaids, flower girls and the mother of the bride — at the comic events. Brides sometimes had beards or moustaches; flower girls were portrayed by grown men. The pretend nuptials often raised money for churches, charitable causes or civic organizations. 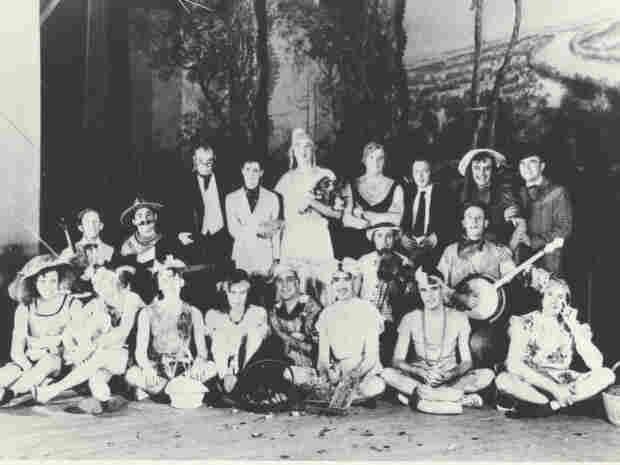 Civic organizations, such as this Lions Club of Mineral Wells, Texas, staged womanless weddings as community events and fundraisers, circa 1940. A. F. Weaver Collection/Portal to Texas History hide caption 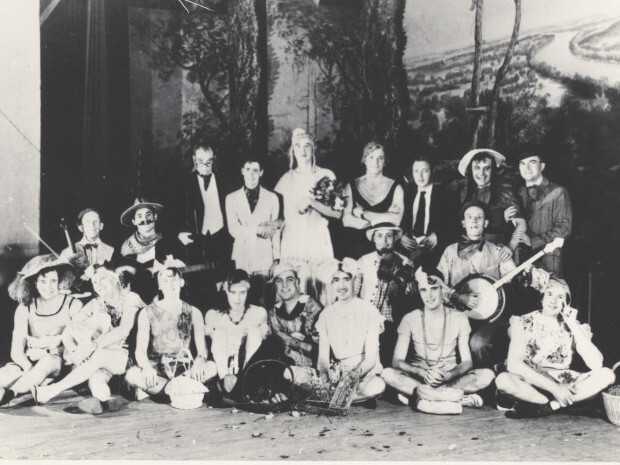 Civic organizations, such as this Lions Club of Mineral Wells, Texas, staged womanless weddings as community events and fundraisers, circa 1940.

"Participants dressed as women — and even some dressed as men — took liberty to 'ham it up,' kissing audience members of both genders, flashing garter belts, adjusting whatever passed as breasts and, in general, just being naughty," writes North Carolina State University historian Craig Thompson Friend in his 2009 book Southern Masculinity.

"The participation of local civic and economic leaders," Friend writes, "became crucial to the success of the womanless wedding."

It is a "most unique and attractive entertainment," the Houston Post reported on May 27, 1917. "Some of the most prominent men in the city will be in it. It is filled with fun from beginning to end and every city or town in which it has been given there have been record breaking audiences, even standing room being at a premium."

The phenomenon seems to have started in the South, but spread quickly across the nation. A womanless wedding in Bloomington, Ill., in the spring of 1918 raised around $225 for the Red Cross, the local Pantagraph observed.

Small towns hither and yon — from Aiken, S.C. to Galena, Kan., to Clayton, N.M. — staged the burlesque-esque shows. "Many in the community were more than willing to pay admission to see their male neighbors in ridiculous female attire," the Encyclopedia of North Carolina notes.

In fact, the Forest City Courier of Nov. 30, 1922, estimated that more than 1,000 people attended a womanless wedding in the North Carolina community to raise money for the local Parent Teacher Association.

Big cities — such as Miami and Pittsburgh — also featured the follies. So popular were the performances that scripts were developed around the idea, and the do-it-yourself theatrical productions were passed along from city to city. Some of the stagings included impersonations of notable Americans, such as Henry Ford and Charlie Chaplin.

A 1928 community production in Lead, S.D., the town's Daily Call reported on Feb. 1, featured one well-known fellow "in a frock of daring brevity and scantiness" and another as the famous actress Theda Bara.

In Newport, R.I., the city board ran into some political obstacles in May 1931 because several aldermen missed a key meeting to participate in a womanless wedding, the Mercury reported.

Even during World War II, when there were fewer men in America's communities, the spectacles continued. In Luverne, Iowa, folks raised $146 for the USO in the summer of 1943 with a combination womanless wedding and rooster sale, the Mason City Globe-Gazette announced.

The practice continued throughout the second half of the 20th century, though perhaps with less frequency — and certitude. There are depictions of womanless weddings — staged not that long ago — still to be found on YouTube.

Over time, there were also spinoffs of womanless weddings — staged mostly at churches and community clubs — called Manless Weddings.

Actresses would impersonate the bridegroom, his father and other males, sometimes including some famous folks. At one manless ceremony in Kingsport, Tenn., the local Times reported on Oct. 6, 1926, a woman pretending to be Babe Ruth made an appearance.

So, when all the "I do's" are said and done, what were womanless weddings all about? In his book, Friend suggests that the womanless wedding was a "ritual of inversion" created not to undermine, but to reaffirm community values.

"In mocking the very ritual they found most central to communal stability," he writes, "organizers and participants in womanless weddings raised questions about the society in which they lived. In the play, they called attention to real social change and its effects on marriage."

But, Thompson adds, "even as it reversed and violated the ideal, the womanless wedding replicated and buttressed reality."

As that reality receded into the past, so, too, did the widespread practice of womanless weddings. With an increase in same-sex couples and new visions and revisions of what it means to be an American family, womanless weddings have become quaint and antiquated.

As Stephanie Coontz, professor of history and family studies at Evergreen State College tells NPR: Womanless weddings "are not very compatible with a world where same-sex marriage is increasingly accepted."