Accessibility links
Independence Day For Americans With Disabilities : NPR History Dept. In July, the U.S. marks the 25th anniversary of the Americans with Disabilities Act and the powerful poster campaign that helped the country come to grips with disability rights. 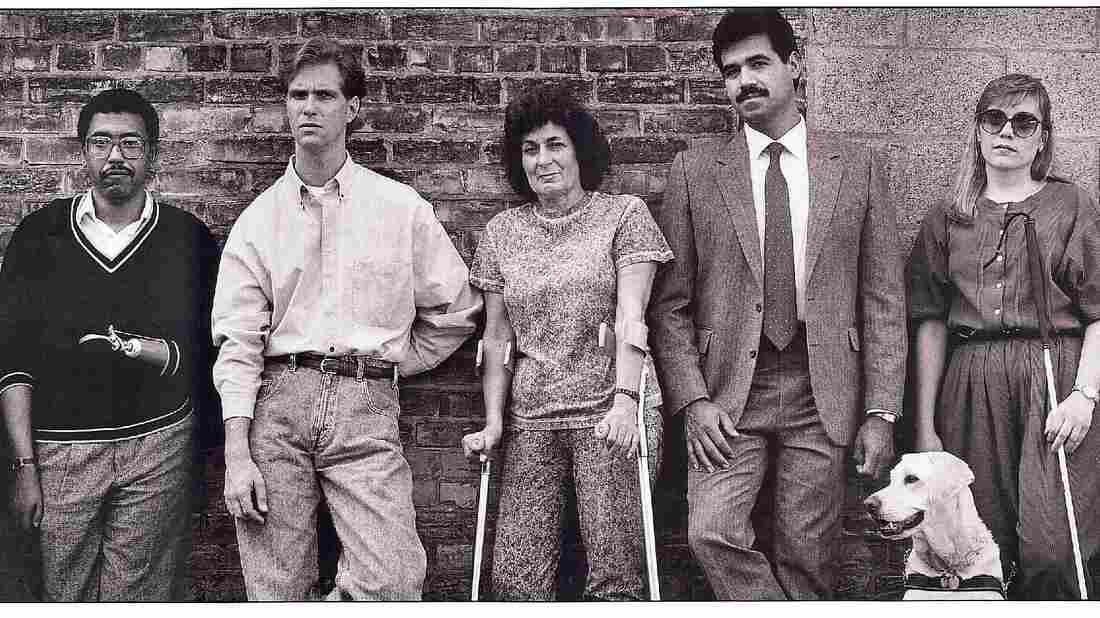 A detail from an Easter Seals poster explaining the Americans with Disabilities Act, which was passed on July 26, 1990. Courtesy of Easter Seals hide caption 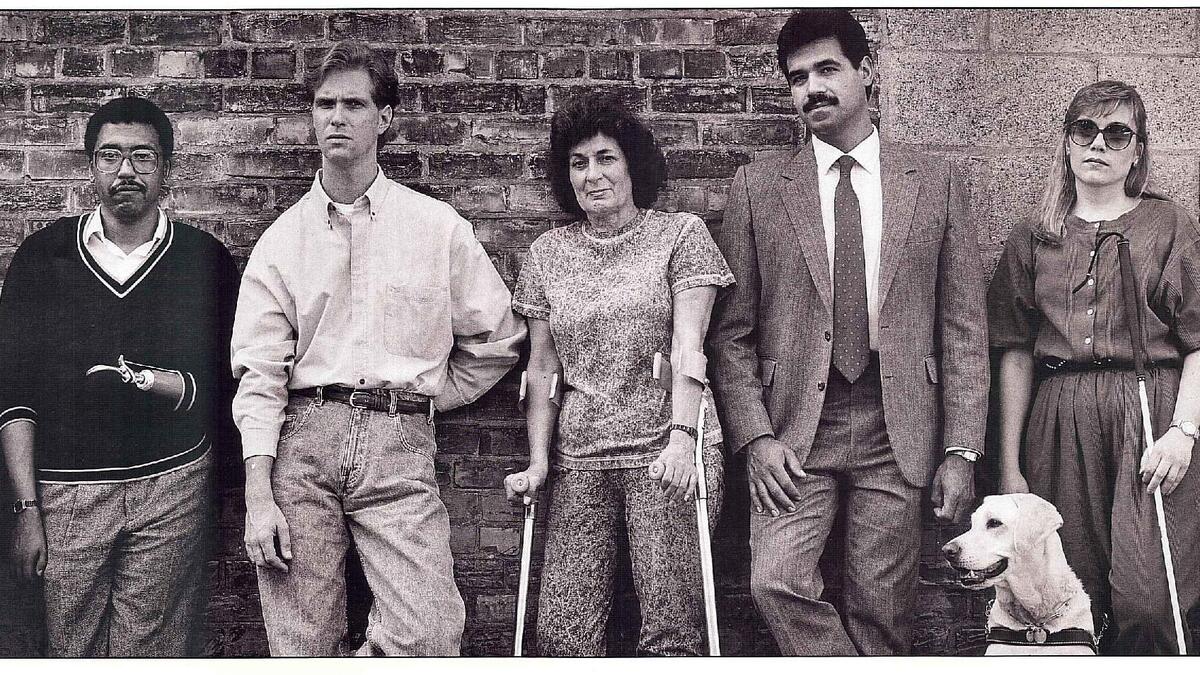 A detail from an Easter Seals poster explaining the Americans with Disabilities Act, which was passed on July 26, 1990.

On July 4, America will celebrate 239 years of independence.

Later in the month, our country will mark another historic moment: the 25th anniversary of the Americans with Disabilities Act, a law passed on July 26, 1990, that guarantees certain rights — and increased independence — to our compatriots with physical and intellectual disabilities.

In this era of ramps and lifts and other hallmarks of accessible design, it's sometimes hard to remember that not too long ago inaccessibility was the norm. And barriers abounded.

As an outspoken advocate for the ADA, Easter Seals created a series of powerful posters that illustrated the dilemmas — and desires — of disabled Americans and helped the country understand the reasons for, and responsibilities resulting from, the anti-discrimination legislation. 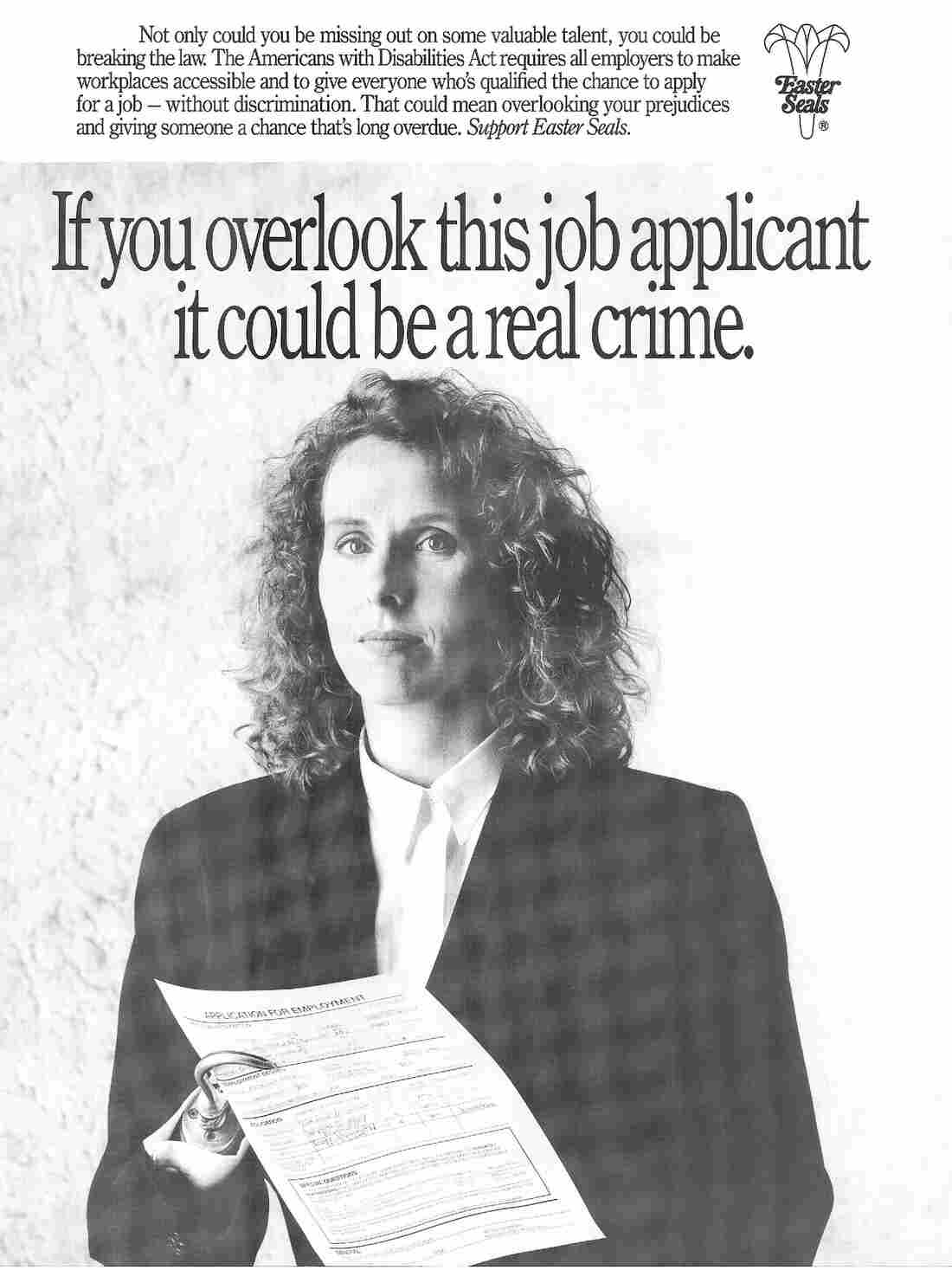 A poster reminds employers to set aside their prejudices against disabled job applicants. Courtesy of Easter Seals hide caption 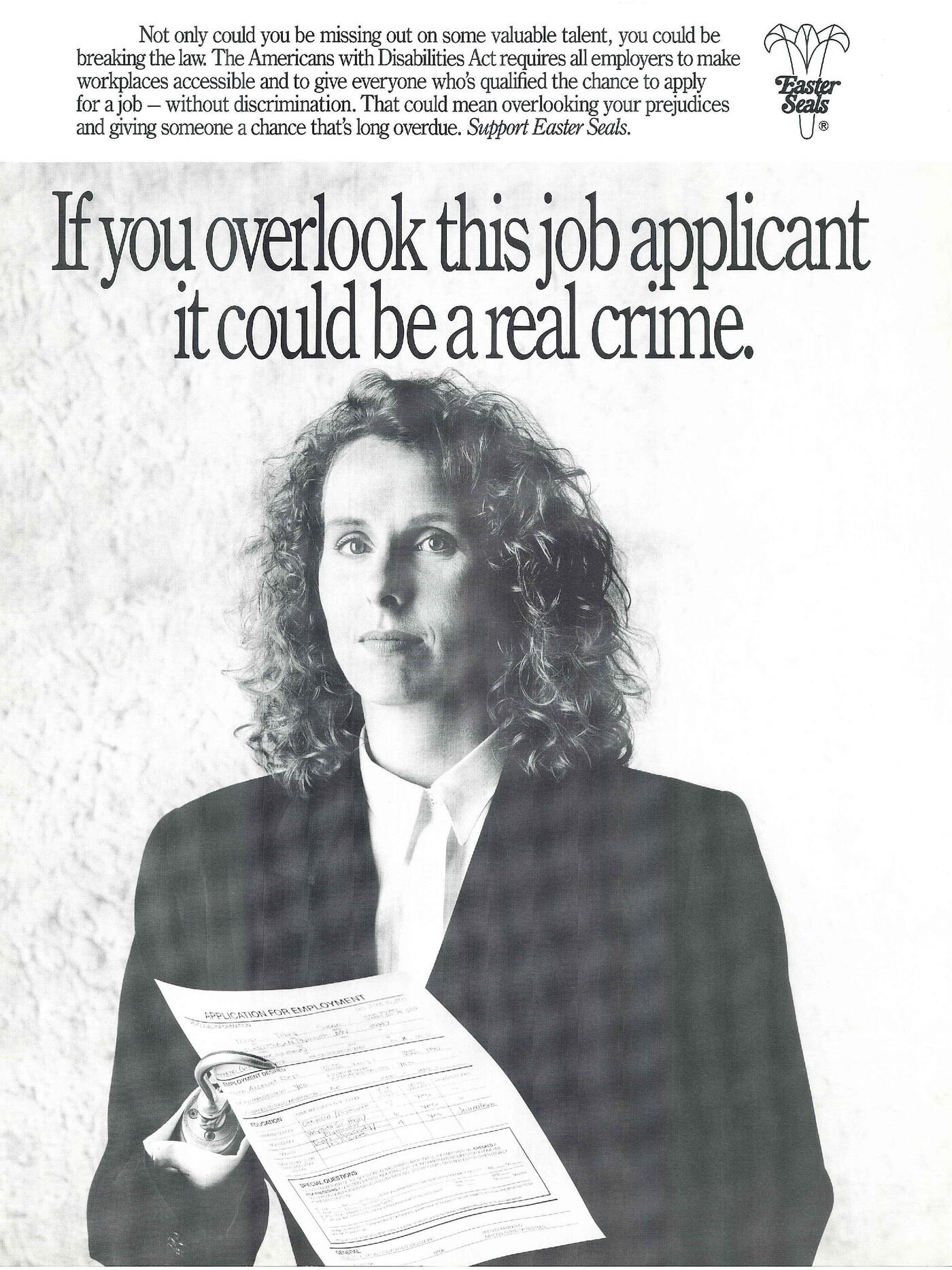 A poster reminds employers to set aside their prejudices against disabled job applicants.

Via the visuals, Neas says, "Easter Seals was working to reposition what it meant to be a person with a disability — what was possible, what was necessary, what barriers existed."

The posters were created by a Minneapolis ad agency for Easter Seals as part of a public service thrust that included print and broadcast spots as well. Easter Seals also dispatched adults and children with disabilities to travel around the country to demonstrate their strengths and public contributions.

"There was a lot of ignorance about the interests and abilities of people with disabilities," Neas says. "Discrimination and low expectations were part of the mainstream culture. Why would someone who uses a wheelchair want to go to the movies? Why would someone who is blind want to eat in a restaurant?"

People with disabilities, and their friends and families, were essential in answering those questions and in raising the consciousness of the country, Neas says.

For instance, she recalls that former Sen. Tom Harkin, D-Iowa, often told stories of his brother, Frank, who was deaf. "Frank attended the Iowa School for the Deaf and Dumb — that's what it was called — and was told the only thing he could do was be a printer, a baker or a cobbler because these vocations were the only vocations appropriate to people who are deaf."

And, she says, "There was a zoo in the Midwest that asked a group of students with Down syndrome to leave because they were upsetting the animals." 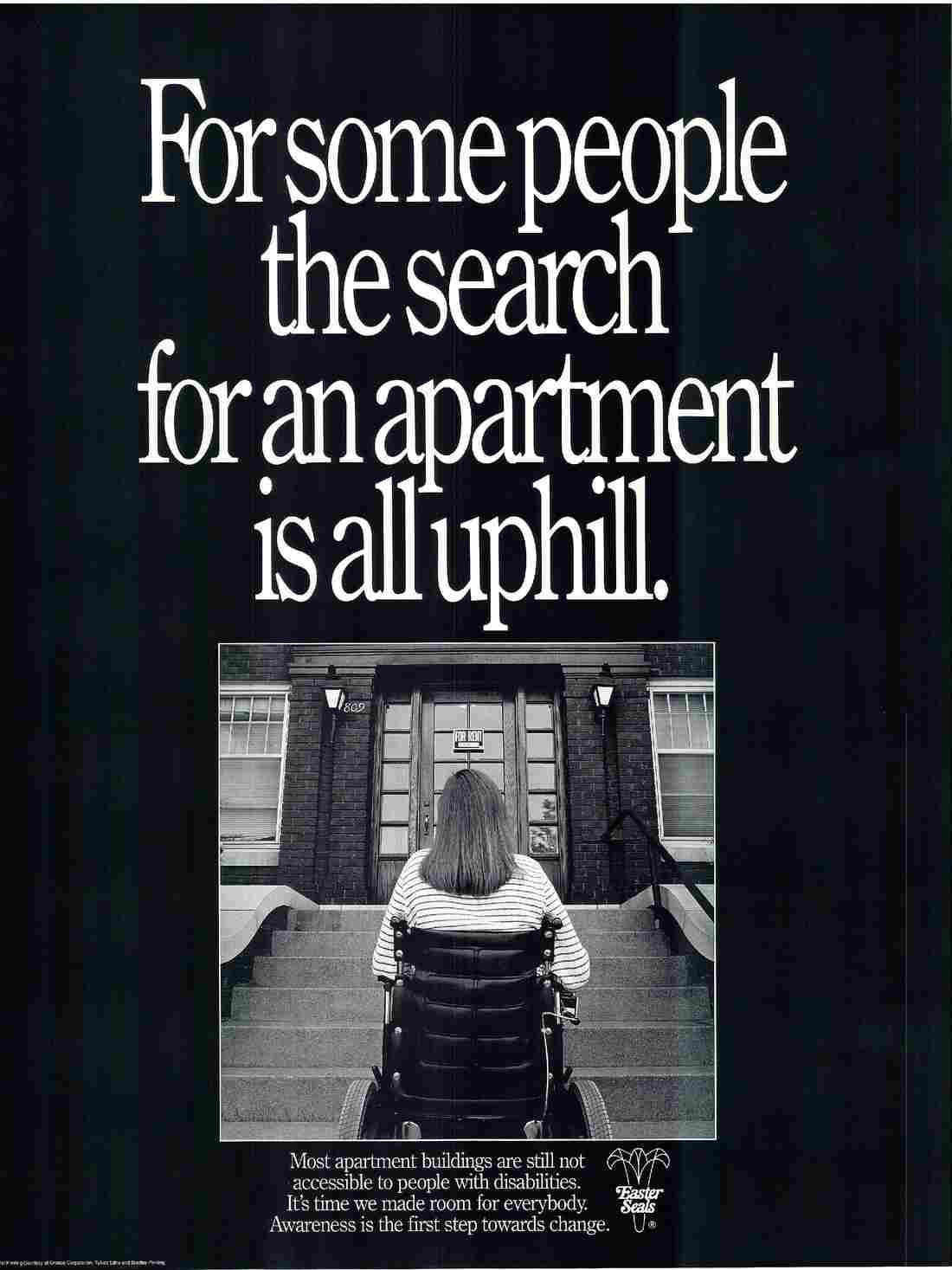 A poster urges landlords to make housing accessible to all. Courtesy of Easter Seals hide caption 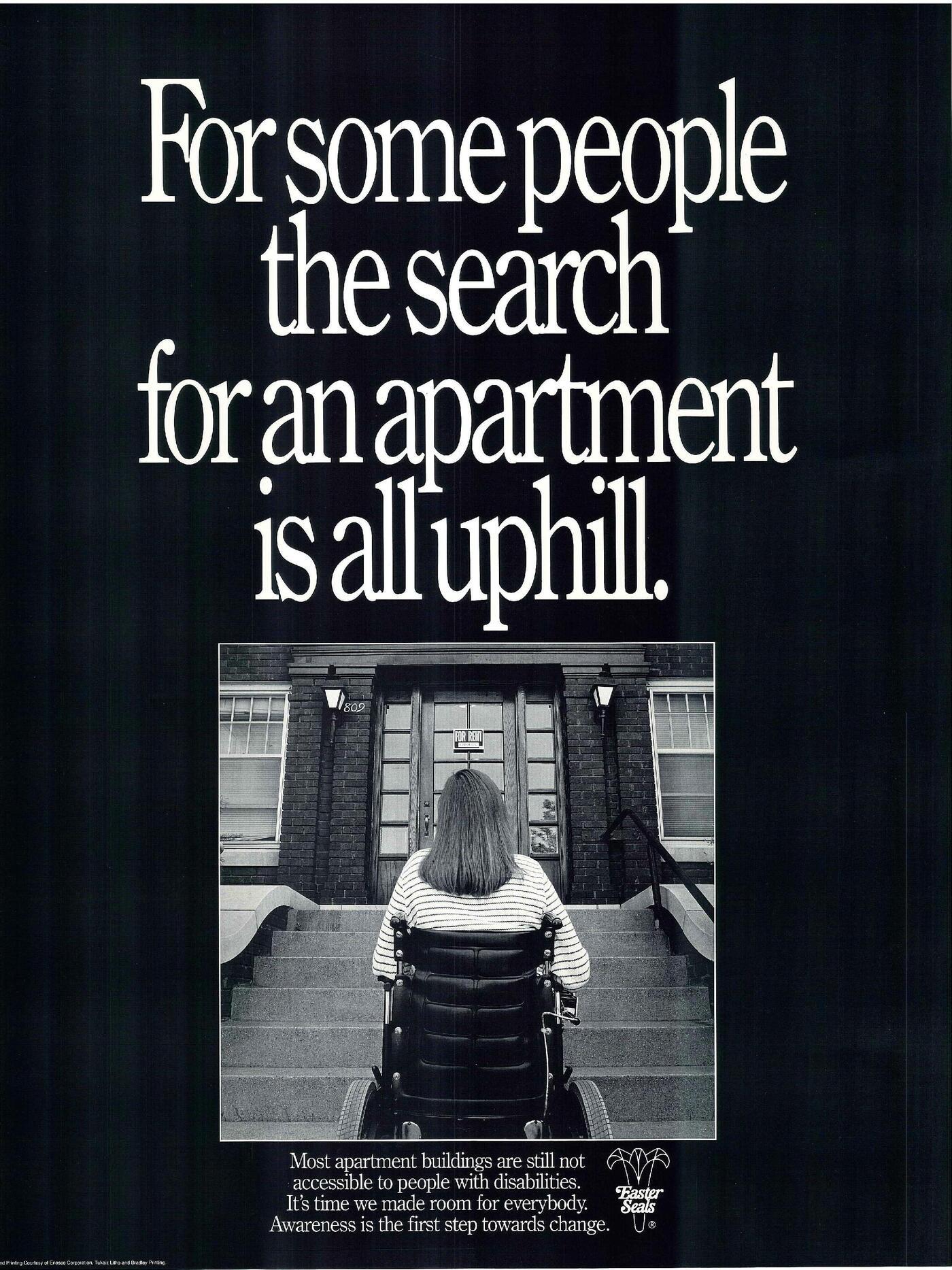 A poster urges landlords to make housing accessible to all.

The Easter Seals ads "were very simple for the public to understand," Neas adds. "They were motivating to the advocates and policymakers across the country who were dedicated to the enactment of the ADA. They were reinforcing why the ADA was necessary and why discrimination on the basis of disability was wrong and should be outlawed."