Accessibility links
The Cherry Sisters: Worst Act Ever? : NPR History Dept. How a group of perhaps-clueless farmgirls from Iowa rose to theatrical fame and infamy at the same time.

The Cherry Sisters: Worst Act Ever?

The Cherry Sisters: Worst Act Ever? 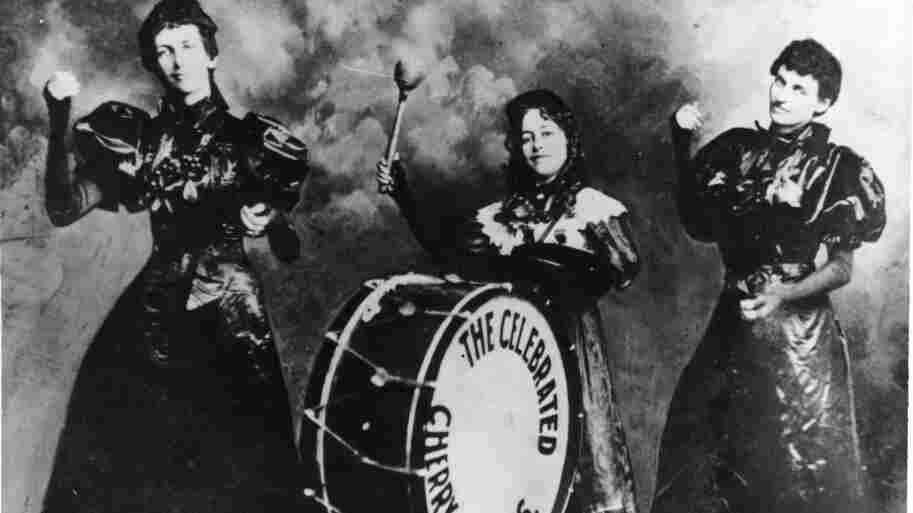 The Cherry Sisters: Three of the siblings strike a theatrical pose. The History Center hide caption 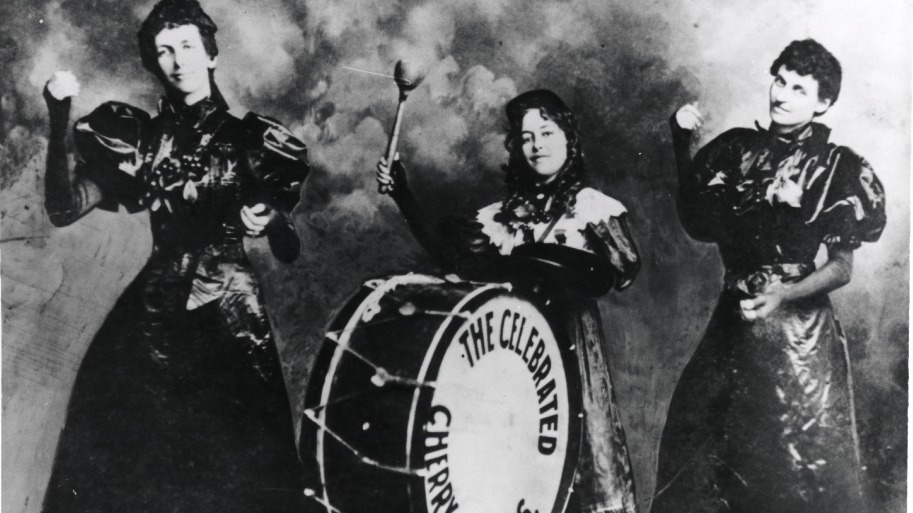 The Cherry Sisters: Three of the siblings strike a theatrical pose.

In the early 20th century, the Cherry Sisters — a family of performers from Marion, Iowa — were like a meme.

Simply invoking the name — the Cherry Sisters — was shorthand for anything awful. As Anthony Slide wrote in the Encyclopedia of Vaudeville, the onstage siblings became "synonymous with any act devoid of talent."

"People enjoyed tossing tomatoes and whatever at them," says David Soren, acting curator of the American Vaudeville Museum Collection at the University of Arizona. "The Cherry Sisters were generally regarded as the worst ever."

But the Cherry Sisters also signified something else in American comedy history. In the tradition of Tiny Tim, Andy Kaufman and certain other deadpan comics, the questions always hovered around them: Were they sincere? Were they in on the joke? Did they even care what people thought?

"Several good researchers," the 2004 book Vaudeville Old and New observes, "have pondered the reasons the Cherry Sisters were willing to put up with the abuse that attended their vaudeville careers. Most observers ranged between two poles of opinion: those who held that the Cherry Sisters knew what they were doing and to some degree were complicit and those who maintain that the sisters were talentless naifs ignorant of how bad they were."

Originally, there were five: Addie, Effie, Ella, Lizzie and Jessie. So the story goes — in multiple accounts — they lost their parents early on. In 1893, several of the sisters formed a performance group to finance a trip to the World's Columbian Exposition in Chicago. One of their first public appearances was at their hometown opera house.

Many chroniclers suggest that the Cherry Sisters mistook the community's polite support for their debut as validation and victory. But as the story unfolds, it becomes harder and harder to know exactly what motivated and sustained the Cherry Sisters as they appeared night after night to increasingly hostile crowds.

They went to Chicago, where they auditioned for an agent. Seeing the flawed performers in homespun clothes, the agent "must have sensed the potential of novelty," according to Vaudeville Old and New. He hired them to tour small Midwestern towns and "along the route, audiences jeered them."

Traveling mostly about Iowa, the Cherry Sisters became the targets of scalding press reviews. The journalistic jabbing, which rivaled some of today's most caustic comments sections, became part of the strange, interactive audience participation that surrounded the sisters. "They couldn't sing, speak or act," the Cedar Rapids Gazette reported in March of 1893 in one of the earliest critiques. "They were simply awful ... At one minute the scene was like the incurable ward in an insane asylum, the next it was like a camp meeting. Cigars, cigarettes, rubbers everything was thrown at them, yet they stood there awkwardly bowing their acknowledgments and singing on."

Soon other towns were clamoring to see just how bad they were. And local reviewers, like crabs in a basket, crawled over one another to write cruel and skewering reviews. The Cherry Sisters were rebuked in Dubuque. The Chicago Daily Tribune of May 19, 1893, reported that when the women appeared at the Dubuque Grand Opera House, they "were pelted with everything from an onion to a tin boiler and were afterwards badly treated on their way to their hotel."

And they were lambasted in Odebolt. The editor of the local Chronicle wrote in February of 1898: "Their long skinny arms equipped with talons at the extremities, swung mechanically, and soon were waved frantically at the suffering audience. Their mouths opened like caverns, and sounds like the wailing of damned souls issued therefrom."

This last vicious appraisal was reprinted in the Des Moines Leader and the Cherry Sisters, who had exhibited litigiousness over the years, sued both newspapers for defamation. In a landmark case, the Iowa Supreme Court eventually ruled in favor of a newspaper's right to freely criticize public performances.

In describing the sisters' act to the court, one of the Cherrys testified: "These entertainments are concerts — literary entertainments. I don't sing much. The others do. I have recitations and readings; recite and read in costume. In feminine costumes. ... Sometimes I have worn men's clothes. I never dance. I recite essays and events that have happened, I have written up of my own."

Her rambling statements may add credence to the theory that the Cherrys were primitive thespians, without self-awareness. 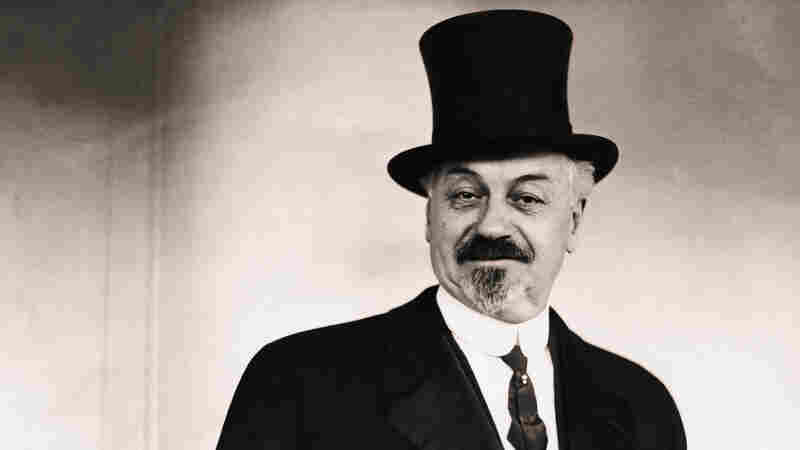 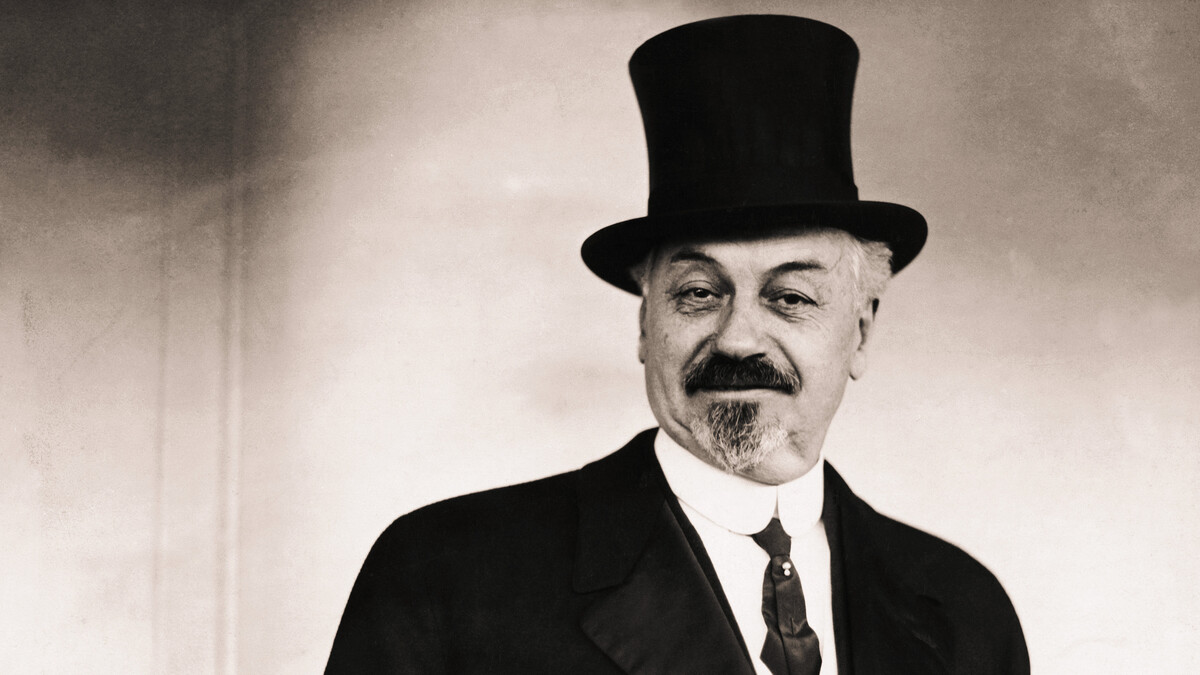 Unless, of course, the bizarre testimony was all part of the act.

National publicity for the Cherry Sisters reached such a fever pitch in the mid-1890s that New York theater mogul Oscar Hammerstein booked them for a well-paying, multiweek vaudeville engagement in 1896 at his Olympia Music Hall.

The New York Times review was headlined "Four Freaks From Iowa; They Presented a Spectacle More Pitiable than Amusing."

For the Cherry Sisters, this was probably the pinnacle — of recognition and of ridicule.

After taking Manhattan, the Cherrys continued to tour for a few years. Jessie died in 1903 and the Sisters, in various number, performed only intermittently. "None of the sisters married," according to the Encyclopedia of Vaudeville. In later years, "Effie was the most active, twice running unsuccessfully for mayor of Cedar Rapids."

The Encyclopedia cites this 1910 description of the Cherry Sisters — from Robert Grau's book The Business Man in the Amusement World: "They were just a quartet of incompetents and they were so indifferent to their reception by the public, that they were in demand for many years at a salary far higher than what would have been accorded them if they had possessed any real ability. There was, though, something approaching cruelty in the spectacle which these poor females presented, night after night, in exhibiting their crudities to howling, insulting audiences."

The Pendulum And The Pits

So the question is: Were the Cherry Sisters — in their prime — the worst act ever on the American stage or were they comic geniuses, committed to the bit?

After all, as David Soren points out, there was "a vaudeville tradition of no-talent acts" and people who "were considered just awful and were put on the vaudeville bill last in order to clear out the theater for a fresh and freshly paid audience."

The Cherry Sisters, he says, did not think of themselves as a bad act.

"I'm not sure if the Cherry Sisters started as sincere performers," M.A. Kibler, author of Rank Ladies: Gender and Cultural Hierarchy in American Vaudeville, tells NPR, "but I would bet that they quickly learned that being the 'worst' was their hook — their novelty. Lots of acts tried to be novel, or exceptional."

As late as 1908, the Sisters were still defending their honor and honesty. In a letter to Variety, in response to one more scathing critique, they wrote: "Although we have the best act in vaudeville and are the best drawing card on the stage, we have no swelled head, as some others have ... We have had more knocking since we went into the theatrical business than any act in the history of the world."

Whether the Cherry Sisters were, or were not, the worst act ever, they were American originals. And there was a pathos about them that is undeniable. Night after night of being on the receiving end of rude catcalls and rotten vegetables must have been unnerving. Day after day of picking up the papers and reading the belittling reviews, regardless of any fame and financial gain, must have been defeating.

What an up-and-down roller coaster ride. All the attention; all the humiliation. All the travel; all the travail. All the edginess; all the exhaustion. Withering heights, if you will.

Or, like the name of their act through the years, "Something Good, Something Sad."

The Cherry Sisters: Good or bad? by Jack El-Hai

Cherry Bomb: The Story of the Awful Cherry Sisters by Irwin Chusid