Accessibility links
What Hats Tell Us About American Men : NPR History Dept. A brief and incomplete study of men's hats in American history — and what they reveal.

What Hats Tell Us About American Men

What Hats Tell Us About American Men 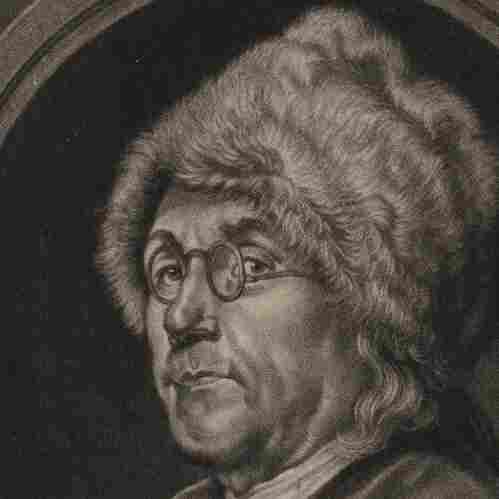 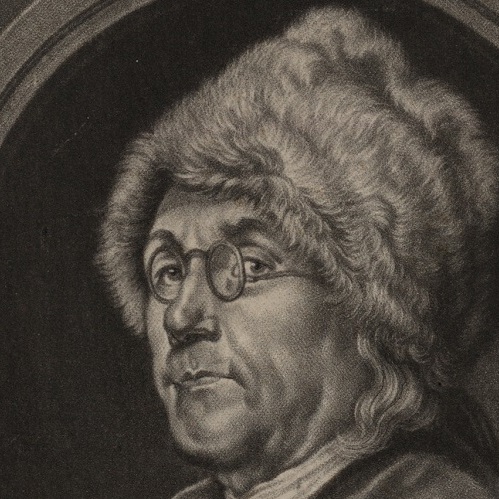 Ben Franklin in a fur hat.

Fedoras, flat caps, baseball caps — hats are prevalent among certain American men these days. Perhaps the hats tell us more about the hat wearer than we realize.

In fact, the National American History Museum points out in its intro to an online hat exhibit that "a hat is much more than a practical device for keeping one's head warm. As a symbol of identity, it also reveals much about the wearer's occupation, social class, cultural heritage, and personal style."

Think about it: George Washington and his tricorn; Abraham Lincoln and his stovepipe. Teddy Roosevelt and his Rough Riders hat. American history was made by men in hats.

For decades and decades, a hat on a man was like a dot on an i, a capstone on a column, a knob on a walking cane. The hat topped everything off, figuratively and literally. And it made a statement.

But what do those hats on historical Americans tell us about the wearers?

Be A Hatter, Not A Hater

The study of the headgear, American "hatology" goes way back. Near the end of the 1800s, a hat-maker in New York City revealed the secrets of reading an American man's personality by the kind of hat he wore. According to a Kansas City Gazette story of Jan. 31, 1890, the unnamed hatter explained to reporter G.H. Sandison that "almost the whole gamut of the human emotions can be expressed by the hat, if one only knows how to do it."

Men often chose hats to reflect their personalities, he said, and not to adhere to the latest trends. "The result is an article that certainly possesses the merit of individuality, if nothing else." 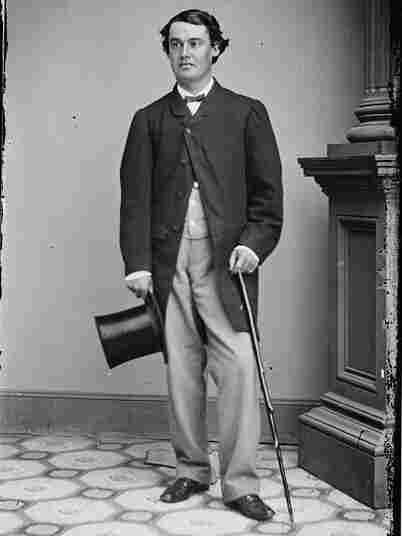 Abram Hewitt with hat in hand, circa 1865. Library of Congress hide caption 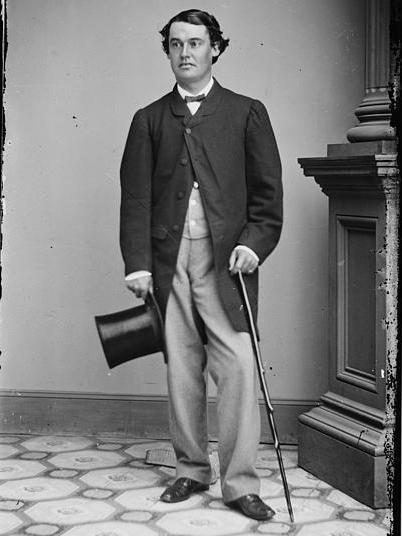 Milliners at the turn of the 20th century recommended that fur beaver hats — popular for men and women — be dry cleaned.

And prominent New Yorker John Jacob Astor, the unnamed hatter continued, routinely wore "a high hat of a most venerable vintage seven inches in measurement and with a wide, straight brim that gives the wearer a Quakerish aspect."

When a hat ages and the brim begins to give way, he said, "the whole character of the hat is changed. The third season generally relegates a piece of head-gear to the ranks of the 'has-beens' and when a man wears so old chapeau he is justifiably classed with the antiques."

The soft high hat, he proclaimed, "is the hat of men of talent. Just look how many of our great men wear it. There's Thomas Alva Edison, who was never known to wear any other than a soft knock-about. He takes a 7 1/4 hat, which is a very large size." Poet Joaquin Miller, Alfred, Lord Tennyson, Henry Ward Beecher, Oscar Wilde and other "poets, painters, authors and statesmen without number affect the soft hat."

Writing in the American Hatter journal of 1915, H.H. Manchester noted that hats in America had a long, venerable history. In 1662 the colony of Virginia offered 10 pounds of tobacco for every good wool or fur hat made in the colony — to promote manufacturing. American colonists became so proficient at making hats — 10,000 were fashioned annually in New York and New England alone — the British Parliament passed a law in the mid-1700s effectively outlawing exportation of hats from the New World.

The Sandusky, Ohio, Star-Journal reported in 1911 that hatters mostly used the fur of rabbits, nutria, musquash — the muskrat — and beaver's hair.

And wool. When George Washington's Secretary of the Treasury Alexander Hamilton delivered a report to Congress in 1791 about the U.S. wool industry, hat-making was considered one of the economy's shining spots. And according to a manufacturing report based on the census of 1860, millions of hats were being made and sold in the United States. 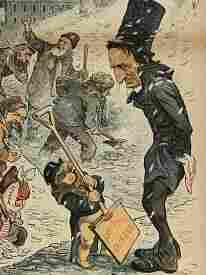 By 1890, the unnamed hat dealer was saying that the soft hat "is the American hat, the National head-gear. It lies easy on the head and is cool in the summer and sufficiently warm in the winter, being made in different weights to suit the season. For a century it has been the distinctive mark of men of brains."

Walt Whitman, he said, was "addicted" to a soft hat and "it is really a knock-about, serving as hat, fan and sometimes even as a table cloth. He has been known to eat his dinner out of its capacious crown."

Over the years, other kinds of head toppers, such as bowlers and boaters and cowboy hats and Panama hats, have been trendy. But many American men continue to prefer the soft hats, like fedoras, flat caps and baseball caps.

Except for construction work in hard hat zones.

A previous version of this post identified Alexander Hamilton as Washington's Secretary of State. In fact, he was Secretary of the Treasury.